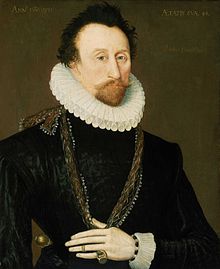 Sir John Hawkins (* 1532 in Plymouth , † November 12, 1595 at sea off Puerto Rico ) was an English seafarer and privateer . As one of the first English slave traders, he made great fortune through the slave trade between Africa and the West Indies .

Trade with the West Indies

In response to a trade embargo in Spain, English and French privateers began to plunder Spanish ships , transports and cities in the Caribbean and to conduct illegal trade in the mid-16th century . John Hawkins was one of them, his cousin Francis Drake another.

Hawkins had family contacts in the Admiralty and in the wealthy merchant class, which favored his rapid rise. First, in 1562, with the help of the English crown, he began the slave trade from Africa to America. The Spaniards, who had a de facto monopoly on the slave trade, saw smuggling in his trade . But since their branches in the New World were economically on their own - compared to European standards - and militarily inadequately equipped and organized, Hawkins had certain opportunities to conclude trade deals. He only had to give the governors interested in trade the opportunity to save face or to justify themselves to the Spanish crown.

So there was a scuffle with the Spaniards on his second trip (1564–1565) off Rio Hacha on May 21, which was followed by a deal. He later used the same strategy of honorable bloodshed or mock attack again in front of Cartagena . In April the governor of Borburata (Burboroata), Alonso Bernaldez, responded too quickly to Hawkins threats (who even paid the usual 7.5% tax to the Spaniards) and was sentenced to a heavy fine for this. 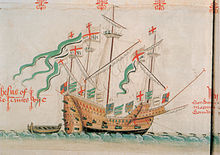 Hawkins' flagship until 1568, the Jesus of Lübeck on a fleet list from 1546 ( Anthony's roll , Pepys Library , Magdalene College, Cambridge ).

The third voyage (1567–1569) went Hawkins with six ships, two of which belonged to the Queen. In the run-up to the planned trip there were protests by the Spanish ambassador and an incident involving Spanish warships in Plymouth . On the way to Africa his flotilla captured some ships and took black slaves on board in Sierra Leone . In the West Indies he carried out important commercial transactions by means of extortion or at least the pretense of the same (burning down some houses, sham attack). Only before Cartagena was he forced to withdraw, when the governor there pretended to be a fighting force.

After a storm, Hawkins had to call at San Juan de Ulúa near Veracruz, as this was the place for repairing large ships. There he captured the dignitaries who kept his fleet (now consisting of ten ships) for the silver fleet of the new Viceroy Martín Enríquez de Almansa and hurried on board. With these hostages he was able to extort access to the Gallega island fort and then lay his men in wait to intercept a gold transport expected from Veracruz. But the gold transport was warned and turned back, instead the viceroy's fleet arrived (13 ships, but only one warship) and 120 soldiers from Veracruz soon followed. On the morning of September 23, the Spanish began the attack, stormed the island and opened crossfire on the English ships. Only two of these escaped , the Judith under Drake (50 tons) and the Minon under Hawkins (300 tons, owned by the Queen). On the way, Hawkins had to leave 104 men behind for lack of food: only 15 men from his ship reached England. Upon their return, Drake and Hawkins fell out, it was about Drake's quick escape and embezzlement.

Despite the failure, Hawkins trading company was extremely successful commercially by 1570. It had a ship tonnage of 2090 tons and 13 ships that were at least 60 tons. But since his fleet was no longer able to trade due to the Spanish boycott, he had to somehow weigh the Spaniards. On August 11, 1571, Hawkins secretly passed over to the Spanish side and was rewarded. But he quickly realized that he was not up to this dangerous betrayal and pulled out of the affair in time.

He was appointed Treasurer of the Navy by Queen Elizabeth I in 1577 and made a Knight Bachelor in 1588 for his services . As one of three vice admirals , he contributed to the victory of the English fleet in the battle against the Spanish Armada in 1588 .

In 1595 he took part in a planned attack on Spanish cities in the Caribbean alongside Sir Francis Drake. However, he died of a fever on November 12, 1595 off Puerto Rico before reaching the first destination town of San Juan .