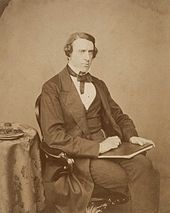 Sir Leslie Stephen , KCB (born November 28, 1832 in London , † February 22, 1904 in Kensington , London) was a British historian , man of letters and mountaineer . He was the father of the writer Virginia Woolf and the painter Vanessa Bell . 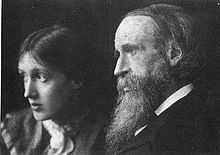 Leslie Stephen was the son of Sir James Stephen , a Colonial Under-Secretary of State and at times Regius Professor of Modern History at Cambridge. His brother was the lawyer James Fitzjames Stephen . His first marriage was to Harriet Marian Thackeray, a daughter of the writer Thackeray , who died in 1875. The marriage had a mentally handicapped child, Laura.

His second wife Julia Jackson Duckworth (1846–1895) brought three children with her from her first marriage to Herbert Duckworth: George, Stella and Gerald. The marriage to Leslie Stephen gave birth to four more children who were about ten years younger: Vanessa , Thoby, Virginia and Adrian.

When Julia Stephen also died in 1895, Leslie Stephen fell into a persistent depression. He locked himself in his study during the day. First Stella Duckworth ran the household, then Vanessa Stephen. When Vanessa fell out with her father, Virginia was the main point of contact. After nearly two years of suffering, Leslie Stephen died of abdominal cancer in February 1904.

Stephens' History of English Thought in the Eighteenth Century , published in 1876, was a great success and has been reprinted until very recently (most recently in 2005). Stephen was the first editor of the Dictionary of National Biography . In addition to the 378 contributions that he wrote for this lexicon, he wrote seven different biographies. From 1871 to 1882 he also published the literary magazine Cornhill . As the successor to Tennyson , he became President of the London Library . Stephen was an avowed agnostic , which he established in his book An Agnostic's Apology . But although Stephen's belief in a righteous God was at odds with the continued suffering of mankind, he did not see himself as an atheist . In 1888 he was elected to the American Academy of Arts and Sciences . In its founding year 1902 he became a member of the British Academy . On June 26, 1902, he was appointed Knight Commander of the Bath .

Leslie Stephen with the mountain guide Melchior Anderegg, circa 1870

Stephen was a great runner and rower while studying at Cambridge. In the so-called golden age of alpinism, he was the first to climb some of the most demanding high peaks in the Alps (including Bietschhorn , Schreckhorn , Monte Disgrazia and Zinalrothorn ) and for several years was president of the Alpine Club , which he co-founded.