The title of this article is ambiguous. Further meanings are listed under Nottingham (disambiguation) .

Nottingham [ ˈnɒtɪŋəm ] is a city in the United Kingdom in the East Midlands in England with around 308,700 inhabitants (2012). It is the administrative seat of the county of Nottinghamshire , but has not belonged to the county since 1998, but is a separate administrative unit ( Unitary Authority ). Nottingham is known for the legend of Robin Hood . 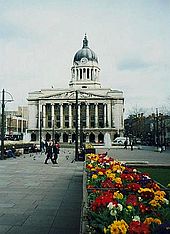 Nottingham was founded as an Anglo-Saxon settlement and was conquered by the Danes ( Vikings ) in the 9th century . Under the Danelag , Nottingham was one of five boroughs ("fortified city"). From the beginning, parts of the settlement consisted of caves carved out of the soft sandstone. The place had names like Tigguo Cobauc ("House of the Caves") and Snottingham (named after the Anglo-Saxon chief Snot). Today's residents of the city are certainly grateful that the S was lost over time, because snotty means something like "snotty" or "mean" in English.

On the orders of William the Conqueror , a castle was built in 1068 on a 40 meter high sandstone rock. The wooden structure was replaced by a stone building after a few decades. The city grew up around the castle. The cave system was constantly being expanded and the poor lived there, who were mainly employed in the tanneries . The caves were abandoned during the 18th century and served as an air raid shelter during World War II. Part of the cave system was made accessible as a tourist attraction, it serves as a cellar for various pubs and houses a shooting range.

One of the pubs carved into the rock, the Ye Olde Trip to Jerusalem Inn , dates back to the Crusades and claims to be the oldest in Britain . Two other pubs called the Ye Olde Salutation Inn and Bell Inn , on the other hand, both claim to be the oldest pub in Nottingham.

The legend of Robin Hood first appeared in the Middle Ages. He allegedly lived in Sherwood Forest north of the city, the Sheriff of Nottingham is said to have been his greatest opponent. While the legends are largely fictional (especially the details), Robin Hood is used as a promotional tool for many local businesses. Even the tourism benefits from it.

The English Civil War began in Nottingham in 1642 when King Charles I hoisted his banner on the castle. In 1651 the castle was destroyed by the victorious parliamentarians. Instead, a country seat was built on the castle hill. This was burned down in 1831 during a workers' uprising.

In the 19th century, Nottingham was a leader in lace making and became known worldwide. Today, however, this branch of industry is no longer of great importance.

The headquarters of Boots , the largest drug store chain in the country, is located in Nottingham . Other major employers are the credit check agency Experian , the electricity company Powergen (now part of E.ON ) and the tobacco company Imperial Tobacco . Until the closure of the factory of Raleigh Bicycle Company in the summer of 2003, the production was of bicycles an important industry. The games company Games Workshop is also based in Nottingham. It is a world leader in the production of tabletop games .

Every year the Goose Fair takes place in the first week of October , one of the largest annual markets in the country. The name derives from the thousands of geese that were herded into the city throughout Nottinghamshire in the Middle Ages .

Two of the oldest football clubs in the world are based in Nottingham: Notts County (1862) and Nottingham Forest (1865). Both clubs had great success in the past, today they play in the fourth and second English leagues. Nottingham Forest won the European Champion Clubs' Cup in 1979 and 1980, the forerunner of the UEFA Champions League . Even cricket and rugby are very popular sports in Nottingham. The Nottingham Panthers are multiple British ice hockey champions and made up a large part of the British national team , which returned to the top division of the world's 16 best teams in 2018 for the first time in 24 years.

Jayne Torvill and Christopher Dean started their careers at the National Ice Skating Center in Nottingham . They won gold in ice dancing at the 1984 Winter Olympics in Sarajevo .

In Holme Pierrepont there is an area with different bodies of water that are shared by all water sports. Both rowing and motorboat world championships were held here.

The city has a Grade II classified arboretum (garden with rare trees).

There is a wide variety of religious communities in Nottingham. The Anglican parishes such as St. Mary’s or St. Nicholas' Church are traditionally predominant . The Roman Catholic Church founded the Diocese of Nottingham with the neo-Gothic St. Barnabas Cathedral by Augustus Welby Northmore Pugin in 1850 . The Methodist Church also plays an important role, as does the Christian Center on Talbot Street.

Nottingham is on the M1 motorway . The East Midlands Airport is located between Nottingham and the neighboring town of Derby . A tram called Nottingham Express Transit has been operating in Nottingham since March 2004 .

On the railways, Nottingham is served by the railway companies CrossCountry (regional traffic, national traffic to the west and east) and East Midlands Railway (long-distance traffic to London , Sheffield and York ).

Sons and Daughters of Nottingham