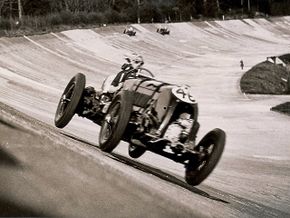 Tim Birkin in Brooklands in 1929

Henry Birkin grew up in England . During World War I he was deployed to the Middle East, where he became infected with malaria , a disease from which he would not fully recover for life. After his discharge from military service, he worked in an office, the monotony of which he compensated by participating in car races in Brooklands from 1921 . Over time, his hobby and his job could no longer be reconciled, so that he soon devoted himself entirely to motorsport.

From 1927 he drove for the British racing team Bentley and, together with his brother Archie, became one of the legendary Bentley Boys . In the same year he finished fifth in the Le Mans 24-hour race . In 1929 he won this race in a Bentley. After Bentley was taken over by Rolls-Royce , Birkin drove for Bugatti , Alfa Romeo (with another Le Mans victory in 1931) and Maserati .

In 1931, on the death of his father, he inherited his title of baronet , of Ruddington Grange in the County of Nottingham.

He drove his last race on May 7, 1933 at the Gran Premio di Tripoli . He badly burned his arm on the exhaust pipe of his Maserati while stopping for fuel. Nevertheless, he finished the race and finished third behind Achille Varzi and Tazio Nuvolari . He probably did not have his burn wound treated sufficiently, so that it became seriously infected and he died of blood poisoning on June 22, 1933 in the Countess of Carnarvon Nursing Home in London . However, some sources also consider it possible that a new attack of malaria was the actual cause of death due to the physical weakening from the burn wound. His marriage to Audrey Latham, daughter of Sir Thomas Latham, 1st Baronet, in 1921 and divorced in 1928, left two daughters but no sons - his title of nobility therefore fell to his uncle Alexander Russell Birkin (1861-1942) as 4th Baronet.