The title of this article is ambiguous. For more meanings, see Brooklands (disambiguation)

Brooklands was an English motorsport racing and test track in Weybridge , Surrey , which was the first in the world to be used only for test and racing. In the meantime it is only used as an airfield and location for an automobile museum.

Daimler AG currently has a test facility on the site . The remnants of the racetrack are maintained by the Historical Society chaired by Stirling Moss, among others .

A wealthy landowner named Hugh Fortescue Locke-King made his grand tour of Europe in 1906 and discovered that there was not a single test track in the British Isles that could help compete with the continent in automotive engineering.

He had relatively quickly selected a suitable property, which was near Weybridge High Street, Surrey and a bend in the River Wey . The course was named after a 12th century lord, Robert de Brok, whose possessions were owned by Henry III. were used as hunting grounds. Since 1830 the area was owned by Peter King, 7th Baron Ockham , as his son Hugh Locke-King could control the area.

On the terrain that looked like a natural amphitheater , he had the world's first dedicated race track built in the form of a 5.23 km long oval circuit with two elevated curves, which was supplemented by further flat internal roads in the 1930s . He invested £ 150,000 of his personal fortune. Ultimately, 2000 workers were employed in the construction. 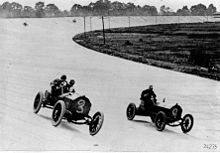 On June 17, 1907, the track was opened with a big festival, car and horse races , which were not wanted at the time. There were still hardly any role models for such events, and so the rules were based on horse races: In order to distinguish the vehicles from one another, the drivers wore colored racing jackets like jockeys. Direction of travel was counterclockwise. Each participant covered the specified number of laps and turned into the home straight after the last lap. After the finish line, it was a short distance back over the track before a street led left towards the pit lane.

The enterprising wife of the founder, Ethel Locke-King, thundered over the elevated curves in her huge Itala at the then legendary speed of 90  mph (145  km / h ) - the public speed limit at that time was only 20 mph (32 km / h) .

The Gottlieb Daimler Memorial Plate was awarded - a Daimler won by almost one lap. At the Montague Cup on the same day, a 120 hp Mercedes crossed the finish line first; there was no official time, but an average speed of 82 mph (132 km / h) was assumed.

The racetrack in detail

The total length of the racetrack, including the home straight, was 5.2 kilometers (3.25 miles), 3.2 kilometers of which was flat, all around 30 meters wide. The longer of the banked turns, Byfleet Banking, had a mean radius of 472 meters, was around six meters high and had a cant of five meters. This long curve descended before the route crossed the River Wey and split at the "fork": the home straight on the left, the course rose again on the right in the direction of the shorter Members Banking, which had a mean radius of 305 meters, Was 8.50 meters high and had an elevation of ten meters before it merged into a flat straight that led back along the railway line ("Railway Straight") to Byfleet Banking.

5000 seats were available, the space for standing room is estimated at 250,000. There were seven alternative bays along the route, and marshals huts stood every 275 meters, connected by electric bells and telephones. The pit area was on the inside of the course, on the home straight, there were also the representative club house and offices. Vehicles get on the course through a tunnel below Members Banking and a street towards the pit area. Visitors came in on foot through several turnstiles.

A change in Brooklands happened in 1909 with the construction of "Test Hill". On the hill, the car manufacturers were able to test the climbing ability and the brakes of their vehicles. The narrow concrete roadway ran over 107 meters with different gradients from 1: 4 to 1: 8, the average gradient was 1: 5.

A very important addition was the "Campbell Circuit" in 1937. It branched off from the main line on the Railway Straight and led over a winding route inside the oval until it hit the home straight. The Campbell Circuit Brooklands was the answer to competition in its own country: In 1933 the Donington Park racetrack opened, and in 1937 a course in Crystal Palace .

But after 1920, motorsport and test drives should become the real attraction for Brooklands. The testing of automobiles in particular was now becoming increasingly standardized and the Brookland route was then considered to be a benchmark for the qualities of the chassis and the engine.

In the mid-1930s, however, the old route had passed its zenith. The concrete showed rough cracks and faults, the wagons made big jumps and were excessively strained, the risk of accidents was too great.

The modern monoposto cars also reached enormous speeds on normal routes; the elevated oval in Brooklands was no longer necessary, but rather a hindrance. 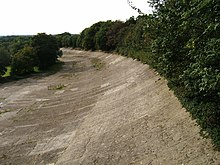 Brooklands 2007: Remnants of the oval course

Inspired by this, Sir Malcolm Campbell initiated the design of a more modern course, which was opened on May 1, 1937 and named after him. In the first race, Prince Bira won on a Maserati .

During and after the Second World War , the facility was only used by the aircraft industry ( Vickers ). The oval route was destroyed in several places to allow large access routes.

A Mercedes-Benz World was opened there in 2006.

Aviation history began in the very first year of its existence. At first it was only a minor episode: a Monsieur Bellamy from France appeared and brought a flying machine. He pretended to have flown 457 meters in Modena, Italy. Locke-King, always open to new ideas, was generous and gave him 100 pounds for expenses, had an area flattened - and the first runway in Brooklands was ready. Monsieur Bellamy boarded his flying machine, which he had initially mounted on two barges, in order to try out the propellers on the lake. The device never went into the air, however, and the Frenchman disappeared as quickly as he had appeared.

In 1907 Alliott Verdon Roe made the first attempts there with his flying machines, which later became known under the company name (company) Avro . The real aviation history in Brooklands began with the First World War . Even before the state requisitioned the site, Locke-King made it available for national defense at the start of the war in 1914, and the country's first aerodrome was built . Various aircraft were tried out here. Brooklands can confidently be called the most important place of aircraft manufacturing during the First World War. In 1915 the first company in aviation history settled: Vickers Ltd. built an aircraft production. To do this, hangars were raised directly along the racetrack. The large white letters “Vickers Ltd. - Brooklands ”on the hangar rear walls can be seen in many later racing photos. This “wall” revealed the pitfalls of aerodynamics in the car races after the First World War: the drivers had to cope with the suction created when driving past quickly.

Until the Second World War, the runway was also dedicated to civil aviation. After the first flight school existed there in 1910, more were opened. Sightseeing flights were offered and the Brooklands Flying Club was founded. Other aircraft manufacturers settled here. During the Second World War, the two aircraft manufacturers Vickers-Armstrong and Hawker were sole users of the entire site to build military aircraft. For this purpose, the existing runway was expanded and production expanded. Various construction work and bomb damage affected the race track deeply - it was no longer used for car races after the World War.

Vickers-Armstrong also created the " Bouncing Bomb " during the Second World War , a special bomb to destroy dams that jumped on the surface of the water to the dam, sank there and ignited in the depths of the water.

In 1946 Vickers-Armstrong bought the site for £ 330,000 and Brooklands maintained its position as the leading aircraft manufacturing facility in Great Britain. The 1945 Vickers Viking was the first in a successful family of large civil and military aircraft. For example, the Valiant and VC10 jet aircraft were built there . Vickers-Armstrong expanded its production facilities considerably over the years, and they were transferred to what would later become British Aerospace . Production and with it the factory were closed in 1987.

Brooklands' aviation record is worth seeing: in addition to all its activities, well-known companies have settled here over the years, for example Avro, BAC , Bleriot , Bristol , British Aerospace , Hawker, Sopwith and Vickers-Armstrong . Around 18,000 aircraft of 250 different types were manufactured there and flew in Brooklands for the first time.

Even before the opening race, the racetrack experienced its first record run. On June 28, 1907, Selwyn Edge started a 24-hour drive to break the record of 1,754 kilometers held by two Americans. Edge's drive ahead is an intensive discussion as to whether humans can withstand this effort and speed and whether the car will last that long - the discussion brought unexpected advertising to the new race track in particular. Edge achieved his goal: within 24 hours he covered around 2531 kilometers at an average speed of 107.87 km / h. At the same time, he set world records for all time distances from 1 to 24 hours as well as time records for 50 miles and 1000 miles. His vehicle was a Napier 60 hp, which, although deprived of its touring body, was otherwise largely standard.

The Englishman WE Cook set the world's first timed record for motorcycles on June 16, 1909 . It reached 122.16 km / h with a NLG (North London Garages) with a Peugeot V-Twin engine.

Factory driver Victor Héméry presented the Benz 200 PS ( Blitzen-Benz ) on November 8, 1909 in Brooklands and set a new land speed record. With a flying start, it reached an average speed of 205.7 km / h over a mile, breaking the magic mark of 200 km / h for the first time in Europe.

LG "Cupid" Hornsted surpassed Héméry's record on December 22, 1913 in Brooklands and set a new record at 118.4 km / h over the standing kilometer. On January 14, 1914, he set seven new records. He achieved the highest average of the return trip over half a mile with a flying start. Here the car reached 199.3 km / h.

A special vehicle achieved some fame in 1921: Louis Zborowski brought his “ Chitty Bang Bang ” to Brooklands. On a pre-war Mercedes chassis, he had a Maybach aero engine with a capacity of around 23 liters that developed around 300 hp. The exhaust essentially consisted of a pipe as thick as an arm. Chitty I, as it was also called, underwent a few changes until it set its fastest lap in 1922 with 182.58 km / h. Chitty I was Brooklands' first monster on wheels to have an airplane engine, and several more were to come in the next few years. For example the Napier Railton with a Napier Lion engine , which had 12 cylinders, a displacement of almost 24 liters and an output of around 500 BHP. On it, John Cobb broke the lap record with 216.79 km / h around Easter 1934, and then set a record with 230.84 km / h that was no longer exceeded in Brooklands.

Not only automobiles set records on this racetrack, but also motorcycles. For example, the Englishman Nott set the hour record of 170.38 km / h with a 500 cm³ Rudge in 1930.