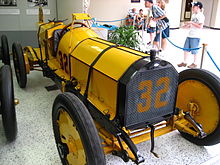 The single-seat Marmon Wasp from 1911

A monoposto ( Italian for one-seater , today often also single-seater ) is a racing car with a single seat in the middle of the car (according to Duden, German Universal Dictionary , 8th edition, a "single-seat racing car with unclad wheels"). As a rule, these are formula racing cars. In many racing classes, homologation requires a second seat, which is only actually occupied in rally vehicles.

In its Formule Libre or Free Formula, the Fédération Internationale de l'Automobile provides the greatest freedom for single-seaters, hardly restricts their bodywork and differentiates them from two-seater racing cars, which they call sports cars .

In 1911, a monoposto was used to win the race against 39 multi-seat racing cars on the Indianapolis Motor Speedway , which is now known as the Indianapolis 500 . Its designer Ray Harroun had provided a rear-view mirror instead of a passenger . With this idea, his Marmon  Wasp had less mass and less drag .

In 1913, the successful Monoposto from Peugeot appeared with a three-liter displacement, four cylinders, two overhead camshafts driven by a spur gear cascade and dry sump lubrication . For a few decades, monopostos retained a tall, narrow body.

That changed with the departure from the narrow ladder frame . The Mercedes-Benz W 196 came with a wide lattice frame , and they went even further: depending on the circuit, different bodies were driven with or without fenders. With the aerodynamically shaped fenders, the top speed increased, but without the fenders, the driver can see the front wheel on the side of the road when cornering.

When Mercedes-Benz got out of Formula 1 after the second season and the second world championship title, such effort was stopped. Since then, most racing classes for monopostos have had to drive without a wheel cover. In English, a distinction is made between single-seater and open-wheel cars .

In later years, a lively competition developed to reduce this aerodynamic disadvantage, which even led to monopostos with six wheels.

In 1990, Harvey Postlethwaite and Jean-Claude Migeot ushered in a new era with the monoposto Tyrrell 019 by placing the nose of his monocoque higher in order to accelerate the flow of air under the vehicle. This shape can now also be seen in sports car races , although it can only be implemented to a limited extent in two-seater racing cars.