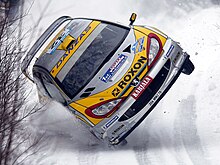 A Peugeot 206 World Rally Car in rally action on snow

A racing car (sometimes racing car or racing car ) is both a on a car race participating as well as a for the predominant or exclusive use in auto racing constructed vehicle . As a result, racing cars are essentially characterized by the fact that the development goal is not determined by the transport of people or goods, but rather by exploring technical and driving limits.

The classification of racing cars is based on design features, number of pieces and areas of application. So there are various classes for the use of different racing cars, ranging from the designated "royal class" Formula 1 , via the so-called World Rally Cars of the World Rally Championship , the GT cars and Le Mans - prototype to the modern touring car as well as the CanAm and NASCAR racing cars and other classes.

Depending on the racing class, the vehicles are generally subject to regulatory restrictions ("regulations", e.g. Formula 1 rules ).

The construction and use of racing cars began shortly after the successful start of production of gasoline-powered vehicles . The first competition with automobiles, organized by the Parisian magazine Le Petit Journal in the original rally style, took place as early as 1894 and led from the French capital Paris to Rouen . Competitors in the forerunners of today's races, which were completed as a reliability test, included the works cars from Carl Benz ' Benz & Cie. as well as Gottlieb Daimler's and Wilhelm Maybach's Daimler-Motoren-Gesellschaft .

Sir Hubert von Herkomer, who died in 1914, is considered to be a pioneer for automobile racing in Germany .