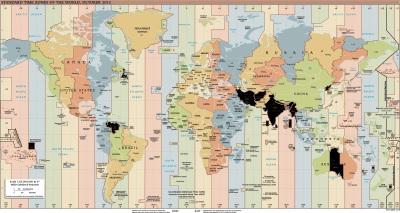 World map with the time zones

The term Greenwich Mean Time (GMT) is now officially only used in Great Britain and West Africa for the time zone Western European Time (GMT / WET, UTC ± 0). Since 1925, the name has been used by different places for different time standards. It is therefore recommended not to use this term if you want to achieve precise time recording.

On average, the sun crosses the midday circle ( meridian passage ) of Greenwich at 12:00 GMT and has almost its highest point in the sky (upper culmination ). Due to the uneven speed of the earth in its elliptical orbit and the inclination of the earth's axis , the actual noon passage deviates from it by up to 16 minutes (see equation of time ), but this balances out over the year . GMT thus follows a fictitious mean sun that moves at constant angular velocity over the course of a year along the equator (instead of along the ecliptic as in reality ).

A more precise method of astronomical time measurement is to measure the time intervals between the meridian crossings of a fixed star ( sidereal time ).

For the purpose of astronomical navigation at sea, Nevil Maskelyne first published the Nautical Almanac in 1767 , whose astronomical tables were designed for the true local time of the Greenwich Observatory . Navigators who evaluated their astronomical observations with the help of this yearbook automatically received a position related to the Greenwich meridian, whereas it had previously been customary to indicate the geographical longitude with respect to the starting or destination point. Nautical charts therefore increasingly began to adopt Greenwich as the standard meridian for their coordinate networks. When the International Meridian Conference established an internationally binding prime meridian in 1884, the choice fell on the Greenwich meridian, which is already predominantly in use. For purposes that require uniform times for different locations, the mean local time of Greenwich should be used. This time was introduced as the legal standard time in Great Britain in 1880 under the name Greenwich Mean Time .

The Bureau International de l'Heure (BIH) was founded in Paris to coordinate timekeeping worldwide, and was taken over in 1920 by the newly founded International Astronomical Union (IAU). Soon after, the IAU changed the definition of GMT. Up until now it was customary for astronomers who mainly worked at night to start the day at noon so that they did not have to constantly change the date at midnight in the middle of their work ( astronomical day , as is the case with the Julian date scale of astronomy is common today). Correspondingly, GMT was originally "the mean solar time on the Greenwich meridian, calculated from mean noon". The IAU introduced a new time scale on January 1, 1925, the days of which began at midnight, following civil custom, and called the new scale GMT again, while the previous scale was renamed Greenwich Mean Astronomical Time (GMAT) . The resulting confusion caused the IAU to rename the new GMT to Universal Time (UT) in 1928 . UT was (and is essentially until today) the mean solar time on the Greenwich meridian, calculated from midnight.

Since UT is derived from the earth's rotation , which is subject to short-term fluctuations and a long-term slowdown, it is not a strictly uniform time scale and cannot be used for many scientific and some technical purposes. Therefore, for astronomical purposes, the Ephemeris Time (ET), derived from the more uniform planetary motions, was introduced in 1952 ; For international traffic and as the basis for the zone times, which are the legal times in the countries of the world , the Coordinated Universal Time (UTC) was introduced on January 1, 1972 . UTC is based on the strictly uniform international atomic time generated by atomic clocks ; Leap seconds at the end or in the middle of a calendar year ensure that UTC does not deviate by more than 0.9 s from the irregular UT.

The term GMT is used today

Today, UTC is still referred to as GMT in the UK and West Africa, although it can differ from the actual GMT (today's UT) by up to 0.9 s. Due to this confusion of terms, it is advisable not to use the term Greenwich Mean Time apart from these regional names for the local zone time.

In Greenwich itself, British summer time applies for seven out of twelve months , and the prime meridian at the Royal Greenwich Observatory was shifted by around 100 meters in 1984 ( WGS84 coordinates).

In British seafaring, the term Greenwich Civil Time (GCT) was prescribed by the HM Nautical Almanac Office , which, however, after 1924/25 left open whether the nautical time change was to be carried out 'astronomically' at noon or 'civil' at midnight, the United States Naval Observatory used the term Greenwich Civil Time for the new regulation, GMT for the midday change. It was not until 1952 that the British and US navies took over general world time.