This article is about the former French automobile manufacturer Bugatti, for other meanings see Bugatti (disambiguation) .

Four-valve engine of the Bugatti Brescia

Bugatti Type 35B in the Musée National de l'Automobile 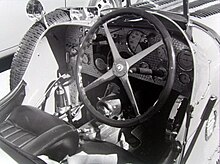 Bugatti was an automobile manufacturer in Molsheim in Alsace . Ettore Bugatti was the founder . Production ran from 1909 to 1963.

The vehicles manufactured by Bugatti were among the most successful racing cars as well as the finest and best sports cars and limousines of their time and made the brand a legend. The original Bugatti operation ceased after the Second World War . Since then, the brand has been revitalized twice. First, in 1987 , Romano Artioli founded Bugatti Automobili SpA in Italy. In 1998 the Volkswagen Group took over the design and naming rights. Since then, Bugatti has continued to exist as Bugatti Automobiles SAS

The automobile designer and manufacturer Ettore Arco Isidoro Bugatti was born on September 15, 1881 in Milan ( Italy ) to a family of artists with roots in northern Italy. He was the older son of Carlo Bugatti (1856–1940), a furniture maker of the Art Nouveau era and jewelery designer, and his wife Teresa Lorioli. His younger brother, Rembrandt Bugatti (1884–1916), worked as an animal sculptor. His aunt Luigia Bugatti was the partner of the painter Giovanni Segantini . His paternal grandfather, Giovanni Luigi Bugatti , was an architect and sculptor.

Ettore Bugatti founded his automobile factory in 1909 in Molsheim in Alsace , which at that time belonged to the German Empire and only after the First World War it belonged to France . The company was known for its excellent engineering skills in high-class automobiles and for success in the early Grand Prix races; Bugatti won the first Monaco Grand Prix . The success culminated in two double victories in the Le Mans 24-hour race with driver Jean-Pierre Wimille (1937 with Robert Benoist and 1939 with Pierre Veyron ).

Ettore Bugatti also designed a successful rail bus , the SNCF XB 1000 and the airplane 100P , which however never flew. His son Jean Bugatti died on August 11, 1939 at the age of 30 while testing a 57C racing car near the Molsheim factory .

The following important information is missing from this article or section:
In 1940 Ettore Bugatti moved production to Bordeaux, Germany took over the factory in Molsheim and Hans Trippel built floating cars there. In mid-1940 Bordeaux was occupied by Germany. That and the further progress are completely missing, as are the reasons and circumstances of the move and the change of ownership. Under discussion: Bugatti has various sources with different statements. That is enough for a whole Bugatti sales in World War II .
Help Wikipedia by researching and pasting it .

After that the star sank. The Second World War ruined the factory in Molsheim, and society did not recover from it. After the war, the Type 101 was presented, which - with a three-digit number - should represent the dawn of a new era. The car, which was only built in a few individual pieces (sedan and convertible), was based on the chassis of the T 57, which was no longer state-of-the-art even before the war. The tastes of the customers had changed, and the bodies of the 101 were extravagant, but no longer possessed the elegance of the Jean Bugatti designs, and so the response was muted. After Ettore's death, his son Roland Bugatti ran the business, albeit with little luck. A racing car he designed from the 1950s was also unsuccessful. The company carried out repairs and conversions of old Bugattis until 1963, when the brand merged with the automotive legend Hispano-Suiza , who also went under during the war (which, despite the name, produced early in France).

At the historic site of the original factory, there is now a manufacturing facility of Messier-Bugatti (part of the SAFRAN group ), which produces parts for rail transport and aviation. The company founders were Ettore Bugatti and George Messier . In 1998 the Volkswagen Group took over the design and naming rights to Bugatti. Since then, Bugatti has existed as Bugatti Automobiles SAS Before that, there was Bugatti Automobili SpA in Italy, founded in 1987 by Romano Artioli. The original company headquarters, the little castle “Chateau St. Jean”, and the accompanying coach houses were extensively renovated under VW and serve today - as in Ettore's time - as a representative of the Bugatti brand . The old production facility was replaced by a futuristic “atelier” on the other side of the castle, so that Bugatti is still producing (or now again after the Artioli episode) at the historical location in Molsheim.

Ettore Bugatti died on August 21, 1947 and was buried in the family grave of the Bugattis in Dorlisheim .

Only a few models of Ettore Bugatti's cars were produced: the most famous were the Type 35 racing car, the giant Royale , and the Type 55 sports car.

At the suggestion of a customer, Ettore Bugatti decided in the 1920s to build the T 41 Royale , a sedan that would outclass the luxury manufacturers of the time such as Rolls-Royce , Hispano-Suiza or Duesenberg in terms of dimensions, luxury and performance . The project was realized, but the envisaged royal families of Europe were not interested in the car, and the global economic crisis caused the remaining possible customers to break away. So only six chassis of the T 41 were built, which received a total of eleven different bodies. This project almost ruined the brand; Ettore Bugatti was only able to save himself by receiving a government contract to design a rail vehicle, which he equipped with four of the Royale eight-cylinder engines, each with an output of 200 hp. The SNCF XB 1000 was in operation between Paris and Le Havre, Caen, Cherbourg and Deauville until 1956.

The most produced and economically most successful car was the T 57 , which was the only chassis / vehicle produced in series at Bugatti in the years before the war.

An early form of Art Deco design and one of the most spectacular designs by Jean Bugatti was the Atlantic type based on the T 57, which apart from a lost prototype was only built three times. Characteristic are its crouched appearance, the vertical, riveted ridges running lengthways across the body and the teardrop-shaped side windows.

Throughout the entire production of 7,950 vehicles (between 1909 and 1956), the models were named with the letter T (for type) and a number that indicated the chassis and drive train.

Bugatti cars have been exceptionally successful in races, with thousands of victories in just a few decades. The little Bugatti Type 10 took the four first places in its first race.

The Bugatti Type 35 , released in 1924, is the most successful racing car in motorsport history with over 2000 victories. Bugatti won the Targa Florio five times from 1925 to 1929. Louis Chiron scored most of his victories and top spots with Bugatti cars, and the 21st century Bugatti Society honored him with the Bugatti Chiron named in his honor. Probably the most memorable racing success for Bugatti was the last when Jean-Pierre Wimille and Pierre Veyron won the Le Mans 24-hour race in 1939 .

Nowadays, original Ettore Bugatti cars are some of the most sought-after cars and they fetch top prices. The sale of one of four Bugatti Atlantic products resulted in 30 million dollars, the Type 35 is traded for up to 1.3 million euros, while the Type 57 is still worth 500,000 euros. The best-known Bugatti collectors were the brothers Fritz and Hans Schlumpf , who ran several textile factories in Alsace . Between 1958 and 1975, until their factory empire went bankrupt, they collected a large number of remarkable cars, now known as the "Schlumpf Collection". The abandoned factory in Mulhouse , where the 123 Bugattis were stored, has been transformed into one of the world's largest automobile museums, the Cité de l'Automobile .