George Louis René Jean Messier (born April 23, 1896 in Monts , Indre-et-Loire department , † January 23, 1933 in Rambouillet , Seine-et-Oise department ; partly also Georges Messier ) was a French engineer, inventor and industrialist. He is considered to be the founder of the industrial development and manufacture of aircraft landing gear .

George Messier was born on April 23, 1896 in Monts in the Indre-et-Loire department to the engineer André Hector Jean Louis Philippe Messier and his wife Marguerite Henriette Marcelle Raabe. His father was the director of the Le Ripault powder factory in Monts . He studied in Lille and Rennes . A planned participation in the entrance examination for the elite university École polytechnique in 1914 could not be realized because of health problems. During the First World War he worked in the chemical industry, where he was involved in the manufacture of explosives . Messier married Yvonne Lucie Bonnamy in Bordeaux on September 27, 1919.

After the war he devoted himself to the development of suspensions and shock absorbers , first for automobiles and then for airplanes until his early accidental death . In 1920 he worked on the development of pneumatic and hydropneumatic shock absorbers and submitted his first patent applications in 1921. Having implemented similar systems with a group of employees and tested on automobiles, he founded in 1925 in the Paris suburb of Montrouge , the company Messier Automobiles , in August of the same year renamed Société anonyme de construction mécanique de la Seine , the lightweight cars with fully hydropneumatic suspension built. The vehicles marketed under the brand name Messier sans ressorts ("Messier without springs") had only moderate commercial success; about 150 copies were made. 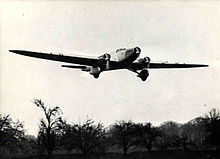 Couzinet 70 from 1933 with Messier chassis

In 1927, Messier finally turned to aviation applications . Together with the engineer René Lucien , he founded the Société Française de Matériel d'Aviation on August 27, 1928 (according to other information already in 1927) , which from 1932 under the name Messier, le spécialiste du train d'atterrissage (“Messier, the specialist for aircraft landing gears ”). The company developed and sold complete chassis, in which innovations such as hydropneumatic shock absorbers and hydraulically actuated drum brakes were integrated. From 1929 hydraulically retractable trolleys were offered. Among the early 1930s with Messier landing gear equipped aircraft transport and passenger planes were Farman F.190 , Farman F.300 that 25-3R version of the Latécoère 25 , the Latécoère 28 and the military plane Potez 25 in version 25 A2 Coloniale and the Couzinet 70 mail plane .

On January 23, 1933, George Messier died at the age of 36 as a result of a riding accident in Rambouillet in the Seine-et-Oise department (now the Yvelines department ).

Messier's company after his death 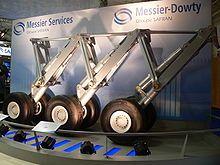 In Oloron-Sainte-Marie and neighboring Bidos in the Pyrénées-Atlantiques department , streets are named after George Messier in the immediate vicinity of a Safran Landing Systems plant ; also a street in Montrouge , the first seat of his company, bears his name.