Alcatel was a French manufacturer of systems and equipment for telecommunications and, according to its own information, the market leader in high-speed access to the Internet and optical networks. Alcatel's customers were network operators , Internet service providers , businesses and private customers. On December 1, 2006, Alcatel merged with Lucent Technologies to form Alcatel-Lucent .

As a brand name, Alcatel is still used today for numerous products. Partly through Alcatel-Lucent, but also partly through legal successors or buyers of former business units. The Chinese manufacturer TCL has been behind the Alcatel One Touch brand , under which cell phones and tablet computers are sold worldwide, since 2005 .

The close contacts to the state post and telecommunications companies (PTT) and to top politicians led to scandals with great public attention both in Germany and in France: In the " dream ship affair " in 1991, Lothar Späth resigned from the office of Prime Minister of Baden-Württemberg. The president of the French parent company, Pierre Suard , was de facto removed by court order in 1995 on suspicion of fraud and embezzlement. His successor was Serge Tchuruk , who led the company to the end.

Supported by the Internet hype, the company grew, particularly through acquisitions in the American market. The fall in prices on the telecommunications market, which began in the 1990s, and the bursting of the dot-com bubble plunged the company into the greatest crisis in its history in 2001, leading to record losses and massive job cuts. At the height of the telecommunications euphoria, Alcatel relocated its group-wide competence center for fiber optic cables to Mönchengladbach , where twelve new fiber optic towers were inaugurated, which had to be shut down just a few months later. Copper telecommunications technology was spun off in 2001 in its own company called Nexans and floated on the stock exchange . Alcatel only held 20 percent of the shares in the newly founded company. In 2005 the fiber optic technology was sold to the Dutch competitor Draka . Positive quarterly results were only achieved again in 2004, albeit at a significantly reduced level of sales.

In August 2004, Alcatel agreed a joint venture with the Chinese company TCL , TCL & Alcatel Mobile Phones Ltd. (short: TAMP). Alcatel owned 45% of the community. A ten-year license agreement followed in May 2005, so that TAMP became a wholly-owned subsidiary of TCL . TAMP has been renamed TCT Mobile Limited. The company sells mobile phones under the name Alcatel One Touch worldwide through subsidiaries (Germany: TCT Mobile Germany GmbH) .

Effective December 1, 2006 , Alcatel merged with its US competitor Lucent Technologies . In the course of the restructuring of the group and in order to focus on the core telecommunications business, Alcatel sold the satellite technology, armaments and transport systems divisions to the French Thales Group at around the same time . Around 11,000 employees were affected, and sales in these areas were recently around 2 billion euros. Alcatel-Lucent , which emerged from the merger, was taken over by the Finnish Nokia on January 14, 2016 and Alcatel was given up as a company and brand name. 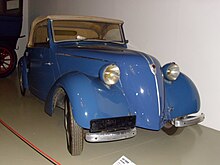 Between 1941 and 1946 the Compagnie Générale d'Électricité was an automobile manufacturer. The designer Jean-Albert Grégoire had designed an electric car that was marketed as the CGE Tudor . Around 200 vehicles were built before production was discontinued.