Bugatti was born into an old artistic family in Milan. His father Carlo Bugatti was an Italian designer , decorator and architect , his paternal grandfather Giovanni Luigi Bugatti was also an architect and sculptor, his brother Rembrandt Bugatti was an animal sculptor and his aunt Luigia Bugatti was in a relationship with the painter Giovanni Segantini . Following the family tradition, his father wanted him to also become an artist, designer and cabinet maker . Against his will, however, he decided early on to pursue an engineering career.

At the age of 17, in 1898, he began an apprenticeship in the Prinetti & Stucchi bicycle and tricycle factory . There he built his first motorized three-wheeler with two De Dion-Bouton single-cylinder engines (Type 1) the following year . A year later he contested his first race with it. This led over a 161 km long route from Verona via Brescia to Mantua and back to Verona. In 1900, another year later, Bugatti & Gulinelli followed with financial support from friends of his father, u. a. of Count Gulinelli, already his first four-wheeled automobile (Type 2). The construction was so remarkable that it earned him a prize at an internationally acclaimed exhibition in Milan. He also won the 1901 Grand Prix in Milan with the automobile he designed.

The Alsatian motor vehicle manufacturer Baron Eugène de Dietrich became aware of the Type 2 in 1901 and the following year Ettore moved to Niederbronn in Alsace to take over the technical management of automobile production at De Dietrich . Ettore was to develop a whole series. Since he was not yet of legal age, his father Carlo Bugatti signed the employment contract on July 2, 1902. Ettore Bugatti developed a. a. the Bugatti Type 5 to take part in various car races, etc. a. to take part in the Paris-Madrid race . However, his employment ended in 1904 because De Dietrich could not cope with Bugatti's personality and stubbornness.

Bugatti's new employer was the company of Émile Mathis , De Dietrich's Strasbourg representative. They wanted to produce cars together. In the newly established factory "Société Alsacienne de Construction Mécanique" (SACM) in Ostwald should Hermes simplex are made to a patent Bugattis. In March 1906, however, Mathis terminated the license agreement prematurely: he, too, could not get on with Bugatti in the long run.

1907 was a year of change in Ettore Bugatti's life. He married Barbara Maria Giuseppina Mascherpa, with whom he had a total of four children, two sons and two daughters. On September 1, 1907, he signed with Gasmotoren-Fabrik Deutz AG in Cologne and also developed a very light car in the basement of his house in Mülheim am Rhein . On December 15, 1909, after developing only two four-cylinder models, he was fired again with a high severance payment. Allegedly he used up the development budget in the wrong place: His designs were supposedly too complicated and their production too uneconomical.

With the money from his severance payment and brokered by the banker Augustin de Vizcaya , he leased the vacant dye works in Molsheim, Alsace , where the Bugatti family moved at the turn of the year. Ettore founded his own automobile factory " Automobiles Ettore Bugatti " on January 1st, 1910 together with his partner Ernest Friederich . On behalf of Peugeot , he developed the Peugeot Bébé in 1911 . The car had a displacement of only 855 cm³ and was manufactured under license by Peugeot from 1913 to 1916. Further licenses went to Rabag (Düsseldorf), Diatto (Turin) and Crossley (Manchester).

In 1912 the Bugatti Type 13 , the car that was built in his basement in Cologne, came onto the market. The production increased continuously in the following years. The Type 13 was Bugatti's first real success. Between 1913 and 1926 around 2000 pieces of the type 13 and the derivative types 15, 17, 22 and 23 with the nickname "Brescia" were made. His customers and the press praised the road holding, the performance and the gearshift. Only the brakes, which were initially only available on the front wheels, were criticized.

In 1914, the Bugatti works already employed around 200 people. 75 vehicles were produced per month. The outbreak of the First World War at the end of July 1914 ushered in a turning point. Ettore fled with his family to Milan, where Ettore's brother Rembrandt Bugatti also arrived at the end of the year. After Italy entered the war in May 1915, the family moved to Paris, where Ettore Bugatti created designs for an 8- and 16-cylinder aircraft engine . However, these engines never went into production. In 1917, at the request of the USA , Ettore Bugatti constructed a 16-cylinder aircraft engine with around 400 hp. The prototype was brought to the USA in a submarine , where the engineer Charles Brady King made some changes. A total of 40 aircraft engines were built, but they were no longer used.

After the end of the war, he returned with his wife Barbara to Molsheim (which was ceded to France after the end of the First World War ) and reopened his factory at the old location. The production of the Bugatti Type 13 and other light sports cars was resumed and in 1920 the VIII Coupe des Voiturettes in Le Mans and 1921 the I Gran Premio delle Vetturette at the Circuito di Montichiari in Brescia celebrated a four-fold victory. The winning Type 13 is from now on referred to as "Brescia". This started a series that led to innumerable victories within just nine months in 1925 (412 according to Ettore Bugatti's idiosyncratic counting method). In 1921, Ettore Bugatti also acquired the site on which his factory was located. A year later, Ettore Bugatti opened a splendid branch on the Champs-Élysées . In the same year, 1922, production of the Bugatti Type 30 Tourer began. He built a touring car for the first time, although racing suitability was also the top priority in the design. In the following four years of production, almost 600 of the Type 30 Tourers were sold. The racing version of the Type 30 received a streamlined body and made its racing debut at the French Grand Prix in 1924 .

After many different models (touring, sports and racing cars), Bugatti began in 1926 a. a. with the construction of the ultimate luxury car, the Bugatti Type 41 Royale. In 1932 it cost three times as much as the then most expensive Rolls-Royce . In addition, Ettore Bugatti began building the SNCF XB 1000 rail bus car in the early 1930s .

He also turned to building racing boats and his never-finished Bugatti 100P aircraft . In 1934, production of the Bugatti Type 57 touring car with different body styles began. It became the best-selling Bugatti touring car with a body designed by his son Jean. In 1936 Ettore's son Jean took over the company. The Type 59 racing car was created under his leadership.

On August 11, 1939, his son and designated successor Jean (1909–1939) had a fatal accident during a test drive in the Bugatti Type 57 C Tank racing car . His second son Roland tried in vain to save the company after the Second World War, but the post-war models could not build on the successes of earlier years. Little by little, production was stopped. Ettore Bugatti died on August 21, 1947 and was buried in the Bugatti's family grave in the cemetery in Dorlisheim (near Molsheim). More than 7,900 vehicles were built during Ettore's lifetime, of which around 2,000 still exist today.

Bugatti's automobiles impressed not only with their simple and pragmatic technical construction, but above all with their aesthetic standards. 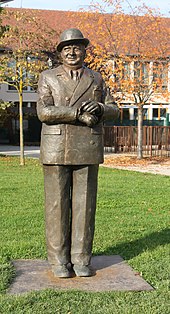 Ettore Bugatti was a horse lover and bred thoroughbreds himself (French: pure sang , as he also called some of his cars). In the 1930s, he replaced the doors of his factory buildings with lock plates, which horses can open with their nose by pressing. He liked to ride out in the morning, sometimes accompanied by a donkey, and then, while sitting on his horse, visited the workers in the factory halls. He had a dazzling, capricious personality and was as vain bon vivant as a gourmet . He disdained racing drivers who were not humble and polite enough to him, just as he did unclean customers. Not everyone who could afford a Bugatti got one.

Since 2009 there are two bronze sculptures in honor of Ettore Bugatti in the Parc des Jésuites in Molsheim.