This article deals with the English city. Other meanings under Southampton (disambiguation) . 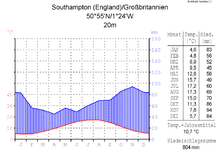 Southampton [ saʊθˈæmptən ] is a major port city in the United Kingdom of Great Britain and Northern Ireland on the south coast of England in County Hampshire . It is located on Southampton Water , the mouth of the Test and Itchen rivers in the English Channel . The city has 254,000 inhabitants. As a metropolitan region, it is loosely merged with other places around the Solent to form the Southampton Urban Area (856,000 inhabitants).

The city was founded by the Romans around 70 AD under the name of Clausentum . The settlement had a predominantly strategic importance as a port for the then already important cities of Salisbury and Winchester . The city gained greater importance after the Norman invasion in 1066. At that time it was called "Hamwic". Nearby Winchester became the capital of England and Southampton the main trading port. With the start of British expansion in Asia and North America , the port lost its prominent position to cities like Liverpool .

The boom came in the mid-19th century when several shipyards opened in Southampton. The ship became the most important industrial and port expanded through increased trade on the North Atlantic . In 1907 the White Star Line moved its headquarters to Southampton, followed by Cunard in 1919 . An airport and several factories were built by the Second World War . Among other things, the first Spitfire aircraft were developed and built in the Woolston district . During the war, the historic old town was destroyed by German bombs and V1 attacks as part of the Battle of Britain . After the war, the city was rebuilt in a modern way and constantly expanded. With the increasing number of air traffic , the number of ship travelers decreased and one concentrated on cruises and freight traffic. Since the 1990s, tourism has also increased significantly, also due to the proximity to the popular New Forest holiday area .

The port (English Port of Southampton) is traditionally the economic and cultural center of the city. It became known, for example, as the departure port of the Titanic in 1912. Southampton is an important European starting point for cruises, with more than 200 calls by cruise ships per year. The ships of the shipping company Cunard Line are based here, but officially registered in Hamilton ( Bermuda ) since 2011 . The port has seen steady growth in freight traffic since the 1970s and is one of the most important ports in Great Britain. The 'SCT 5' container terminal was opened in March 2014 and is the second most important in England after Felixstowe with an annual turnover of over 1.5 million  TEU (as of 2014). DP World is now the sole operator of the container terminal , having acquired the last of the shares in the terminal from Associated British Ports , which has operated the Port of Southampton since 1982. Oil handling is of great importance. Oil companies BP and ExxonMobil built two oil refineries on Southampton Water. The ExxonMobil refinery in Fawley is the largest in the UK.

The Maritime Administration, Maritime & Coastguard Agency (MCA), an executive agency under the UK Department of Transport, is headquartered in Southampton. The Coast Guard ( Her Majesty's Coastguard ) also belongs to it .

In March 2007 there were 120,305 jobs in Southampton. Over a quarter of the city's jobs are in the health and education sectors.