This article describes the city in England, see Winchester (disambiguation) for more meanings .

Winchester ( English pronunciation [ ˈwɪntʃɪstə ]) is a city in the south of England with about 40,000 inhabitants. It is the administrative center of the county of Hampshire and the district of City of Winchester , which is considerably larger than the city itself. Winchester is located at the western end of the South Downs on the idyllic River Itchen and on the railway line that runs from London to Weymouth in south-west England . 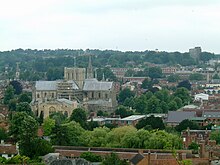 Settlements in the urban area are already known in pre-Roman times. In the western part of today's city you will find the iron age settlement “Oram's Arbor” , which consists of a moat . After the occupation of Britain by the Romans, the settlement gained in importance and was called " Venta Belgarum ", which means "Market of the Belger ".

The early medieval historian Nennius called the place with the Celtic name "Caergwinntguic" or "Caergwintwg". From the Anglo-Saxon conquest of the area in 519, however, the name "Wintanceastre" was otherwise used (the first part of which "Wintan-" continues the Latin "Venta"). 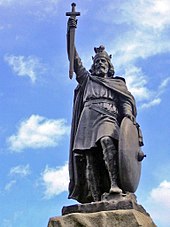 Alfred the Great statue in Winchester

The city gained historical importance around the year 686 when it replaced Dorchester as the actual capital of the old Kingdom of Wessex after King Caedwalla of Wessex defeated King Atwald of Wight. Although it wasn't the only city called the capital , King Egbert made it the most important city of his kingdom in 827. In the middle of the 9th century, St. Swithin was Bishop of Winchester. At the end of the 9th century, the city also became part of a number of fortifications along the south coast of England built by Alfred the Great and called "burhs".

The Saxon street layout can still be seen in the city map today: the streets are laid out in the shape of a cross, as was customary at the time, and the existing Roman street layout was incorporated into the urban planning. The church district was in the southwest, the judicial district in the southeast, and the merchants were in the northeast of the city. The boundaries of the original city can now be seen from the preserved city wall, which in Saxon times was probably a wooden barricade with a surrounding moat. There are six city gates, one each to the north, west, south and east, as well as Durngate and King's Gate. 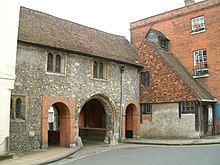 Winchester remained the capital of Wessex and later of England until after the conquest by the Normans , who chose London as their capital in 1066.

The Middle Ages and after

A heavy fire in 1141 hastened the city's decline. This could not be stopped by the fact that William von Wykeham (1320-1404) played an important role in urban development. As Bishop of Winchester he was responsible for the construction of large parts of the current cathedral and founded Winchester College, as well as the New College at Oxford . In the Middle Ages, Winchester was at times an important center of the wool trade, only to lose its importance.

The author Jane Austen died on July 18, 1817 in Winchester and was buried in the cathedral.

The romantic poet John Keats lived in Winchester from mid-August to October 1819. Here he wrote Isabella , St. Agnes Eve and Lamia . Parts of Hyperion and the tragedy Otho the Great were also written in Winchester.

The history of Winchester is impressively illustrated in the City Museum, which is located on the corner of Minster Street and The Square.

The Winchester Cathedral is the second longest cathedral in Europe and was built 1079th Its unique construction combines the architectural styles from the 11th to the 16th century. Many bishops of Winchester were buried inside, including a. William of Wykeham. The tombs of kings such as Egbert von Wessex , Canute and William Rufus can also be found there alongside well-known people such as Jane Austen .

The cathedral used to be a popular place of pilgrimage as it housed the shrine of St. Swithin . The pilgrimage to Canterbury also begins in Winchester.

Next to the cathedral you can see the ground plan of the previous church, the old minster, on the meadow. The New Minster Church, built afterwards, in which Alfred the Great and Edward the Elder were originally buried, also stood next to the cathedral.

The cathedral has a boys 'and a girls' choir, which regularly give concerts in the cathedral.

In the churchyard there are a number of historic buildings from when the cathedral also included a monastery. The dean's office, which dates back to the 13th century, is particularly worth seeing. It was originally the house of the prior . Arthur Tudor , then heir to the throne and Prince of Wales, was born there in 1486 .

Not far away is Cheyney Court, a half-timbered house from the mid-15th century that originally served as the porter's house for the monastery and later became part of the Bishop's Palace.

The first building with hammer-beam vaults is also located in the churchyard next to Deans Garden. It is called the Pilgrims' Hall and used to be part of an inn that housed the countless pilgrims who wanted to visit the Swithin Shrine. There the remains of the dean's lavish banquets were distributed to the pilgrims, who could also spend the night in the hall. The year of construction of the building is given as 1308. Several events are planned for the 700th anniversary of the building in 2008. Nowadays the building is used as a school auditorium, event location and theater.

Wolvesey Castle was the Norman bishop's palace from 1110. At this point, however, a building had already existed in Anglo-Saxon times. The palace was later enlarged by his brother Henry of Blois during the political turmoil of King Stephen's time . When Philip II of Spain married Maria the Catholic , the eldest daughter of Henry VIII , in the cathedral on July 25, 1554 , they were guests in the bishop's palace. Nowadays only ruins of the palace remain, which are looked after by the English Heritage . Only the chapel became part of the new palace, which was built in the 1680s. Only one wing of his building has survived.

King Arthur's Round Table in the Great Hall of Winchester Castle

The Great Hall of Winchester Castle was built in the 12th century and expanded sometime between 1222 and 1235. It still looks like it did back then. Today it houses the round table of King Arthur , which has been hung there since at least 1463. However, it is not a table from Arthur's time, but rather it dates from the 13th century. Nevertheless, it is historically significant and still attracts many tourists. The table was originally unpainted and was not decorated with pictures until King Henry VIII in 1522. At the top you can see King Arthur on his throne and around the table are the names of the legendary knights of the round table.

The outdoor areas of the Great Hall are designed in the style of a medieval garden. Apart from the hall, only a few excavated foundation walls of the keep exist. They were built over with the King's House, which is now part of the Peninsula Barracks, which house some military museums. In addition, an Army training regiment is stationed at Sir John Moore Barracks in Winchester , where basic training for recruits takes place.

The buildings of Winchester College house a private school founded by William of Wykeham in 1,382th There are two courtyards, a gatehouse, cloister , hall, and a notable college chapel. It was originally founded to teach poor boys before they went to Oxford New College and pursued church careers.

Hospital of the Holy Cross

The almshouses and the vast Norman chapel of the Hospital of the Holy Cross were founded outside the city by Henry of Blois in the 1130s. The so-called “Wayfarer's dole” has been handed out since the 14th century, a mild gift consisting of ale and bread, originally intended to support the pilgrims on their way to Canterbury. 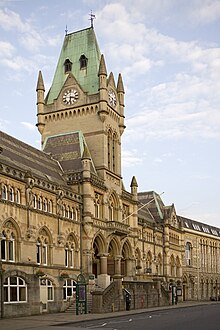 Other buildings of interest include the 1871 Guild Hall, the Royal Hampshire County Hospital, and Winchester City Mill, one of the many watermills that operated on the Arms of the Itchen . The Winchester City Mill was recently restored and is now again hydropowered to grind grain. The mill is owned by the National Trust .

Winchester's football club is called Winchester City FC and was founded in 1884. He has the motto "Many in men, One in Spirit" and currently plays in the Wessex League Division 1.

Winchester also has a rugby team called the Winchester RFC, as well as an emerging athletics club called Winchester and District AC.

Bowling is played at the Riverside Indoor Bowling Club.

There are a variety of schools in Winchester. The three secondary schools are King's School, Westgate School, and Henry Beaufort School, all of which have excellent reputations. Peter Symonds College senior is also among the best in the country. Winchester College keeps dropping many students off to elite universities after graduation.

One of the language schools is the Winchester School of English, where students from all over the world study English.

Winchester's twin cities are Laon in France and Giessen in Germany.

On Channel 4's television program , "The Best and Worst Places to Live in the UK 2006", Winchester was voted Most Livable Place in the Country. In 2007 Winchester finished second behind Edinburgh.

Every year since 1974, on the first weekend in July, Winchester has hosted the Hat Fair , a street theater festival with performances and workshops across the city. The Music and Comedians Festival is the longest running such festival in Great Britain.

One of the UK's largest and most successful farmers' markets, with over 100 stalls, takes place in the city center every second and last Sunday.