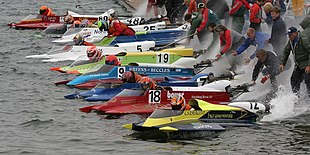 Jetty start of the Formula 125 for the circuit race 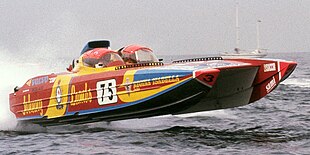 As power boating the operation of will power boats called for sporting purposes. Races are held in two disciplines, circuit racing and offshore racing .

Circuit races mainly take place on rivers or lakes, occasionally in ports or on calm inlets. The courses are marked by turning buoys. These buoys are about 200 to 1000 meters apart so that the drivers can see them. The premier class is Formula 1 .

Offshore races take place on the sea near the coast. The boats are manned by at least two people. One of them is responsible for the navigation , as the turning buoys are several nautical miles apart. The premier class is Class 1 .

Almost all of the information in the following article relates to circuit racing.

The first motorboat races were carried out in 1898 by the French Yachting Union. At the 1908 Summer Olympics in London, motorboat racing was a unique Olympic sport . The Harmsworth Trophy was first held in 1903 and was dominated by Gar Wood in the 1920s and 1930s . In 1904 the Gold Cup was held for the first time in the United States . Nowadays there are around 10 races annually in Germany.

The world umbrella organization for motorboat racing is the “ Union Internationale Motonautique ” (UIM), based in Monaco. Sports sovereignty in Germany lies with the Deutscher Motoryachtverband e. V. (DMYV) based in Duisburg. The individual races are organized by clubs that are members of the national association.

To increase safety, all larger catamarans (for racing boats from the 500 cm³ class, for sports boats from the 750 cm³ class) must have a safety cockpit. It is made of synthetic resin reinforced with aramids ("Kevlar"), carbon fibers with a core made of rigid foam (" Airex "). The driver is buckled up in this stable “capsule” and has an oxygen supply. This means that it is protected in the event of collisions and rollovers. These drivers have to practice annually how to free themselves from the safety cockpit underwater ("turtle test")

In order to start a motorboat race, the driver needs a license. This is awarded to German drivers by the DMYV after an examination, for which ADAC and DMYV prepare with a theoretical and practical weekend course. A health certificate is also required. In the T 550 class it is possible to start at the age of 14, in all other classes at 16. Certain fast classes require a special UIM license .

The different boat and engine shapes are divided into series according to the regulations of the UIM world umbrella organization. The most common series are:

In Germany, the following classes are mainly driven:

In the USA , similar to automobile racing, its own racing culture has developed. Practically only here are z. B. Drag Boat Racing and Unlimited Hydroplanes .

Drag boats only reach their high speeds over very short distances and are the counterpart to dragster vehicles on land. This is about maximum acceleration on a straight line.

The premier class of racing boats are the Unlimited Hydroplanes , which reach the highest speeds.

World and European championships can be held in all defined classes. Lately these championships have been held as a series in many classes, i. that is, there are several races taking place in different countries. The evaluation points are added up at the end of the year. In these series one no longer speaks z. B. from the "Class O-250", but from the "Formula 250". Some of the series are available as world or European championship series. Championships that are not held in a series take place over a weekend in four runs, with each driver having a cancellation result.

(For circuit races) The drivers decide for themselves when to go on the water within the preparation time shown. They circle in the “preparation zone”, not in the “safety zone” 150 m from the start line. In the last minute, a second hand then runs backwards. At “0” the boats are allowed to cross the starting line. This starting form was classified as "dangerous" a number of years ago because accidents occurred frequently. Therefore, it is rarely used nowadays. The "jetty start" is common.

With a master boat

(In offshore races) The boats gather on the water. A boat of the race management (masterboat) picks up speed, accelerates and releases the start by lowering a flag. From this moment on, the participants are allowed to overtake the master boat.

The jetty start is the most common starting form in circuit racing. The boats are on the jetty and are allowed to warm up the engines up to 30 seconds before the start. Then comes the red light and only when the red light goes out may the engines be restarted and the boats set off. Instead of a jetty, the boats can simply lie in knee-deep water. This is common on American lakes.