from Wikipedia, the free encyclopedia
This is the spotted version , flagged on April 27, 2020 . There are 2 pending changes that have yet to be viewed.

A fatwa ( Arabic فتوى, DMG fatwā , pl.فتاوى fatāwā ) islegal advice given by a Muslim authority on request with the purpose of resolving a religious or legal problem that has arisen among members of Islam. The person who gives the legal information is usually aman familiarwith Islamic jurisprudence ( fiqh ) and is referred to as a mufti ; the one who asks for legal advice is called Mustaftī . As legal information, the fatwa is thus the Islamic equivalent of the responsa , the legal information given by halachic authorities in Judaism. 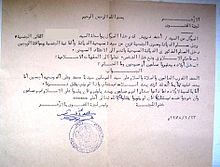 The word fatwa is male in Arabic sex and is treated in German as feminine or neuter.

The sphere of influence of each fatwa is based on the personal authority of its author; This means that - unlike in the court judgment - the legal opinion represented in the fatwa is only binding for those who also recognize this authority. Since Sunni Islam has no clergy , there are no generally accepted rules about who can issue a fatwa. For this reason there is the so-called "Adab-al-Mufti literature", which is intended to specify the duties of the Mufti and Mustafti. Each Islamic school of law (madhhab) follows its own legal system, and Muslims belong to different schools of law. Thus, both theoretically and practically, different Islamic clergymen can issue contradicting or competing fatwas.

In countries with Islamic law, fatwas are usually discussed and decided by the national religious leaders before they are issued. Often times, they don't do this completely independently of the government. In such cases, fatwas are hardly contradictory and have the status of an enforceable law. If two fatwas contradict each other, the leaders (in whose hands both civil and religious law are in control) usually work out a compromise to clarify which of the two should be legally effective.

In countries where Shari'ah is not part of the legal system , devout Muslims are often confronted with two competing fatwas. In such a case, they usually follow the leader who represents their religious direction or whose decision suits them best. For example, Sunnis would mostly follow the school of law to which they traditionally belong, but would not follow the fatwa of a Shiite cleric.

As early as the 10th century, Hanafi legal scholars in Transoxania began collecting their own legal information. Alongside the so-called mutūn (“basic texts ”) and the shurūh (“comments”), these fatwa collections represent one of the most important genres of Islamic legal literature. While in the Mutūn and the shurūh the tradition of their own legal school was passed on, the fatwa From the early modern period onwards, collections were the actual place for legal training . In them, the Muslim scholars, dealing with older literature, put forward their own views, some of which diverged greatly from the tradition of their own school of law.

From the 13th century , fatwa collections began to be compiled in the Indian sultanate of Delhi . Among the most famous collections that arose here are al-Fatāwā al-Ghiyāthīya , written by Dāwūd ibn Yūsuf al-Chatīb al-Baghdādī for Sultan Ghiyāth ad-Dīn Balbān (r. 1266–1286), and al-Fatāwā at-Tītīrchārchārchāwā at-Tītīrchārchārchā which ʿĀlim ibn ʿAlāʾ al-Hanafī (d. 1397) put together with a committee of scholars for Chān-i Aʿzam Tātār Chān, a high-ranking nobleman at the court of Firuz Shah Tughluq . Five volumes of the latter collection were published in Hyderabad between 1984 and 1989 with financial support from the Indian government .

Fatwas on the occasion of specific incidents

The best-known fatwa, which first made the term known to the non-Islamic world, comes from the Iranian Ayatollah Khomeini . On February 14, 1989, the Shiite leader demanded the killing of the writer Salman Rushdie for alleged blasphemy in his book The Satanic Verses , which was first publicly presented in London in September 1988, and for apostasy from Islam .

In September 2000, Sheikh Nasr Farid Wassal, Grand Mufti of Egypt , issued a tobacco fatwa in support of the national anti-smoking campaign. In each of the four orthodox schools of law there are three controversial doctrines about tobacco consumption: some are of the opinion that smoking is forbidden, others consider it permitted or reprehensible.

After the terrorist attacks on July 7, 2005 in London , the Council of Sunnis there (Jama'at e Ahl e Sunnat) declared that any form of attack was incompatible with Islam. To underline the importance of the statement, the Sunni Council chose the form of the fatwa.

On October 26, 2005, Islamic clergymen in Somalia published a fatwa directed against circumcision and genital mutilation of girls. It condemns the traditional practice that is widespread in Africa as "un-Islamic". Sheikh Nur Barud Gurhan, the vice-chairman of the Somali clergy's umbrella organization, equated the circumcision of women with murder. In 2006, another fatwa against female genital mutilation was issued by Al-Azhar University in Cairo . The initiative came among other things. a. from the Obermufti of Mauritania and from Rüdiger Nehberg .

In April 2006, Iran's President Mahmud Ahmadinejad announced that he would lift the strict stadium ban on women that had been in effect until then on the occasion of the upcoming soccer World Cup . However, the implementation of the corresponding change in the law was prevented by a fatwa by Ayatollah Mohammad Fazel Lankarani .

In May 2012, based on the song Naghi for blasphemy and insulting the tenth Imam ʿAlī al-Hādī an-Naqī, the fatwa was pronounced to send the Persian rapper Shahin Najafi, who lives in Germany, “forever to hell”.

In October 2014, 120 internationally respected authorities wrote a fatwa in which they contradicted the abbreviated understanding of the Koran by the followers of the Islamic State. The document deals intensively and in detail with ISIS 'interpretation of Islam. It is based entirely on the statements and actions of IS supporters and is written in Arabic.

In December 2015, a fatwa was issued in India by around 70,000 Indian Islamic clergy against terrorist organizations such as IS, Taliban and al-Qaeda. The content was that these organizations were “not Islamic” and “a danger to humanity”.