Madhhab , [ ˈmaðhab ] ( Arabic مذهب, DMG maḏhab , plural: madhāhib مذاهب / maḏāhib , [maˈðaːhɪb]), in the field of Islam , denotes a course in the doctrine of legal norms (Fiqh) , which is characterized both by certain principles of norm- finding ( Usūl al-fiqh ) and by special individual regulations ( furūʿ ). The term is often translated as “school of law”, but this term is misleading, because the difference between the disciplines is not only expressed in secular law, but also on a ritual level, for example in prayer and purity regulations .

Today there is a general tendency to recognize eight madhāhib as legitimate:

Individual believers as well as entire states can orientate themselves on a certain madhhab. The ḥanafi madhhab is particularly widespread in South Asia, Central Asia and Turkey, the Malikite in the Maghreb and West Africa, the Shafiʿite in Egypt, Syria, Yemen, Southeast Asia and on the coasts of the Indian Ocean, the ,anbalite in Saudi Arabia. The Jafariya is considered the school of law of the Twelve Shiites and is accordingly linked to their areas of distribution. The Zaidīya is only common in northern Yemen today. The Ibādīya is the state madhhab in Oman and also has followers in various countries in North Africa. The Zāhirīya today no longer has a regional base, but its teachings can be understood through traditional texts.

The necessity of observing a madhhab is judged differently by Muslim scholars and is related to the respective attitude towards the principles of Taqlid and Ijtihad . Some Islamic currents such as the Ahl-i Hadīth and the Salafīya completely reject the adherence to a madhhab as an unlawful innovation and demand that one be allowed to orient oneself solely to the Koran and Sunna .

Differences between the different Madhāhib exist both in the area of Usūl al-fiqh and in the area of ​​practical regulations. In particular, however, they show up in ritual prayer. The differences in the determination of the prayer times were and are still important today. For example, according to the Shafiites, Malikites and Hanbalites, the best time for morning prayer is dawn (ġalas) , when the first light appears on the horizon. Hanafis, on the other hand, prefer a somewhat later time for this prayer, namely the time of dawn (isfār) . There were also arguments about the so-called Qunūt , a special supplication for divine grace and guidance, and the question of whether it is compulsory in morning prayers. While the Shafiites and Malikites affirm this, the Hanafis and Hanbalites believe that he is abrogated and reject him. Another point of contention is whether or not to read the Basmala aloud at the beginning of the Fātiha . While Hanafis and Hanbalites oppose this, reading aloud is advocated by Shafiites. Malikites leave them out entirely. Different views also exist with regard to the positions of the hands during prayer. For example, while according to the majority of Madhāhib the person praying in the standing position (qiyām) should put his arms in front of his body after entering the state of consecration, the Malikites and Shiites of the Jafaritic direction let their hands hang down.

There are also differences in the things that precede prayer, the call to prayer and ritual cleansing . The Shiites add the two formulas Ašhadu anna ʿAlīyan walīyu Llāh (“I testify that Ali is the governor of God”) and Ḥaiya ʿala ḫayri l-ʿamal (“Hurry to the best act”) in both Adhān and Iqāma the Sunni schools reject these formulas. The Shafiites, Hanbalites and Mālikites recite the takbīr only twice in the Iqāma and the Shahāda once, while the Hanafis and the Shiites double the number of these formulas as in the Adhān.

As for ritual cleansing before prayer, according to the four Sunni schools of thought, under certain conditions it is permissible to put on your shoes instead of washing your feet , while the Jafaritic school of teaching rejects this practice. According to the Shafiites, ritual cleansing requires a declaration of intent , while the Hanafis do not consider it necessary.

Tarāwīh prayers are also controversial. While the Sunni schools advocate them, the Shiite Madhāhib reject them.

Development of the different schools

In the early years of Islam, local norms schools developed, for example in Medina , Mecca , Kufa , Basra and Damascus - the latter is also known as Auzāʿīya after its most important representative, al-Auzāʿī , also known as Auzāʿīya . It was the school favored by the Umayyads , but was later superseded by other courses. The Malikites were formed from the school of Medina, and those of the Hanafis developed from the Iraqi schools. In the 9th century different schools emerged around a founder, including the Schāfiʿīya, the Hanbalīya, the Zāhirīya and the Jarīrīya founded by Ibn Jarīr at-Tabarī (d. 923).

The various schools competed sharply with one another at an early stage and advertised themselves. To emphasize the superiority of one's own madhhab, scholars circulated reports that the prophet Mohammed or another distinguished personality had confirmed to a man the excellence of the madhhab in question in a dream. Reports of encounters with al-Khidr were also used for advertising.

On the Shiite side, al-Qādī an-Nuʿmān developed its own Ismaili school of Fiqh in the 10th century . A century later, Imamites and Zaidites also developed their own directions in the doctrine of norms.

Auzāʿīya and Jarīrīya quickly lost importance. The Zāhirīya experienced a heyday at the beginning of the 11th century with the work of the Andalusian scholar Ibn Hazm and at the end of the 12th century it briefly became the state madhhab in the Almohad Empire . Abū Yūsuf Yaʿqūb (1184-99) publicly confessed to this teaching direction and began to fight against the Malikitic direction widespread there. According to reports from contemporary authors, Abū Yūsuf even had the books of the Mālikites burned. With the turn in religious policy under Idris I al-Ma'mun around 1229, the return to Malikite teaching was also proclaimed. 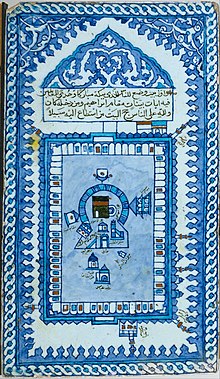 The square of the Holy Mosque with the Maqām pavilions of the imams of the four Sunni Madhāhib on an Ottoman decorative tile from the 17th century. On the right the particularly large maqam of the Hanafis.

In the political sphere of the Abbasid caliphate around the middle of the 12th century, the view came into play that there are only four recognized fields of study in Sunni norms. These included the Malikite madhhab, to which the Muslims in the Maghreb were attached, the ḥanafi madhhab, which was particularly popular with the Turks , the Shafiite madhhab, which was predominant in Egypt, Syria, Iran, Yemen and on the coasts of the Indian Ocean was, as well as the Hanbali madhhab, who had many followers in Iraq. A pioneer of this four-madhhab idea was the Hanbalit Ibn al-Hubaira, who was in the service of the Abbasid caliphs Al-Muqtafi and al-Mustanjid .

The implementation of the four madhhab system can best be seen in the organization of community prayer in the Holy Mosque of Mecca. At the end of the 12th century, the central square around the Kaaba was divided into four zones, within which the followers of the various Madhāhib performed ritual prayer in separate groups next to each other. The locations of the respective prayer leaders were marked by more or less large devices that were arranged in a circle around the Kaaba. According to a fixed order, the various prayer groups ( jamāāt ) prayed one after the other in a certain order, and at the same time during the evening prayer. This organization of community prayer is described for the first time in Ibn Jubair's travelogue and was maintained until the early 20th century. During the Mamluk period, the stands of the prayer leaders were converted into pavilions and called maqām .

The Abbasid caliph al-Mustanṣir (r. 1226–42) founded the Mustansiriyya in Baghdad in 1234, the first madrasa in which all four Sunni schools were taken into account. Such four madhhab madrasas were later built in other places as well. An example is the madrasa built in 1284/85 in the tomb complex of Qalawun in Cairo. In the Mamlukenreich, from 1265 onwards, all four Sunni courses also received their own senior kadi . The four madhhab system was anchored there in the state legal system.

In the 19th century, several movements emerged in British India that refused to submit to the rules of a madhhab. These included in particular the Tariqa-yi muhammadiya and the Ahl-i Hadīth . The traditionalist scholars who belonged to the Hanafi discipline insulted these reform-oriented Muslims as "people without madhhab" ( lā-madhhabī ) and denied them belonging to Islam. In their view, every believer was required to submit to the authority of a scholar, and this included recognition of the madhhab traditions. The reform-oriented Muslims who rejected the madhhab concept defended themselves by stating that the division of Muslims into disciplines had not yet existed at the time of the Prophet and that the Qur'an and hadith provided no indication that Taqlīd was necessary in relation to a madhhab. In India at the end of the 19th century, there were many public discussions among Muslim scholars on this issue, some of which were led by non-Muslim arbitrators. A particularly violent critic of the “people without madhhab” was the scholar Muhammad Naimuddin (1832–1908), who wrote his own work on them in 1894, calling for adherence to the Hanafi school of law.

At the same time, another development took place towards the end of the 19th century. In reform Islam, the partial overcoming of the schools of law was enforced, for which purpose the adoption of legal clauses from different schools and the formation of individual opinions were declared legitimate when drafting the “ codified law ”.

The extension to the eight madhhab system

Already in the 18th century there were tendencies to integrate the Twelve Shia into the Madhhab system. Nadir Shah , who ruled over an empire whose population was mixed Shiite-Sunni, asked the Ottoman government, as the representative of Sunni Islam, to recognize the Twelve Shia in its new form as a Jafaritic school and to do this by building a fifth prayer place the Kaaba to make clear. However, the plan failed. In 1959, however, Azhar University , one of the most respected educational institutions of Sunni Islam, declared the Jafaritic school to be orthodox and placed it on an equal footing with the four Sunni courses.

Today's eight-madhhab system is based on the so-called Amman Message of the Jordanian King Abdullah II bin al-Hussein . After obtaining legal opinions from various religious authorities, including the Sheikh of Azhar , Grand Ayatollah Ali al-Sistani and Yusuf al-Qaradawi , he convened a conference in Amman in July 2005 , attended by 200 scholars from 50 countries. At the end of the conference the Amman Message was adopted, the first of three points containing the recognition of the eight Madhāhib. With the acceptance of the Amman Message at the summit conference of the Organization of the Islamic Conference in Mecca in December 2005 and by the International Islamic Fiqh Academy in Jeddah in June 2006, the recognition of the eight Madhāhib is now official.