The title of this article is ambiguous. Further meanings are listed under Sunna (disambiguation) .

Sunna ( Arabic سنة 'Customs, usual behavior, traditional norm') Pl . sunan (سنن) is a term that in pre-Islamic times denoted the manners, customs, values ​​and norms of the various Arab tribes, but acquired a religious meaning in the course of the formation of Islam by becoming the abbreviation for the sunnat an-nabī to be followed , the " Action of the Prophet (= Mohammed ) ”, became. In this sense, Sunna is used in particular in Islamic jurisprudence and traditional science. Over time, there have been various shifts in the meaning of the term. The corresponding verb isاستنّ سنّ, DMG sanna / istanna ‚sth. prescribe to introduce sth. '. 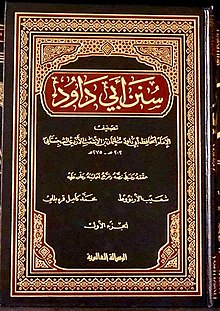 Sunna in the Koran

The term Sunna is an ancient Arabic word that was already known in pre-Islamic times ( jāhilīya ). The meaning is commonly given as “established practice” or “behavior”. The word Sunnah appears 16 times in the Koran , but it is only used in the Medinic period of the Annunciation. In terms of content, almost all places deal with an "unchangeable" (see above 33:62) pattern of action of God, which always came into play when people were guilty of certain wrongdoings, especially the failure to acknowledge the previous prophets. This pattern of action is known as the sunnat Allaah (“ God 's way of doing things ”) or sunnat al-awwalīn (“The way of the first generation after the Prophet”).

The basic for the later Islamic concept of a practice of the Prophet ( sunnat an-Nabi ) is found not in the Koran, but is already enshrined in the Koran that the Islamic law formative idea of sunna Madiya , the Sunnah, which thereby has binding power that they was used earlier. The Arabic verb maḍā , from which the participle māḍiya is derived, contains, as Meïr Bravmann has shown, both meanings, the precedence and the obligation. The sunnat al-awwalīn can be found in Sura 8 : 38, where it says: wa-qad maḍat sunnat al-awwalīn : "Even in prehistoric times there were proceedings against the earlier (generations in the known manner)."

Another meaning of Sunnah is: “Usage”, “Usus” in general and can vary from region to region. Already in the Muwaṭṭaʾ of Mālik ibn Anas the " Sunna of the Medinese" is a groundbreaking component of Islamic jurisprudence. Already at the beginning of the 2nd Muslim century (8th century) people spoke of the " sunna with us" ( al-sunna ʿindanā ) and of the " sunna in our opinion" ( al-sunna fī raʾyinā ) in all centers of the Islamic world etc. without resorting to the Prophet's Sunnah . The antonym to Sunnah is Bid'a (heresy).

Even in the earliest sources of Islamic literature, another term appears that is close to the meaning of Sunnah : sīra (سيرة) “Procedure”, “Behavior and Lifestyle”. Often both terms - as M. M. Bravmann (1972) pointed out - are used together: "the Sunnah of the Prophet and his Sīra ". In these cases sīra is to be distinguished from the “biography of the prophets” as a literary genre, also called sīra , which is the subject of the Vita of Muhammad ( Ibn Ishaq ).

Next to the Koran , the Prophet's Sunna is the second most important source of Islamic law . asch-Schafi'i (d. 820) has in his systematization of Islamic jurisprudence the status of Sunna as a source of law as sunnatu 'n-nabiyy (سنة النبي) more precisely defined; they are hadiths that go back to the prophet with an unbroken chain ( Isnad ) of narrators. But it was only Ahmad ibn Hanbal († 855) who tried to establish a connection between the Sunnah of the Prophet as a source of law and the Koran text; Here he went back to sura 33 , verse 21:

"You have a beautiful example in God's Messenger ..."

The Sunnah as a second source of law

After the Qur'an, the Prophet's Sunnah is considered the second source of Islamic law and the highest personal authority in the Muslim community ( umma ). His authority - in addition to revelation - is emphasized several times in the Quran text:

“You believers! Obey God and His Messenger and do not turn away from him when you hear! "

The one who observes the Sunnah of the Prophet is ṣāḥib al-sunna , who consequently also maintains unity in the community of Muslims; as early as the second Muslim century (8th century AD) there were numerous representatives of the hadith sciences in this sense as ṣāḥib as-sunna wal-jamāʿa صاحب السنة والجماعة, DMG ṣāḥibu ʾs-sunna wa-ʾl-ǧamāʿa .

The Islamic tradition thus combines the Koran and the Sunna to a standard to be followed as a guarantee for the unity of the Muslims and expresses this thought in the description of the last speech of Muhammad during the so-called farewell pilgrimage:

“I left something clear and distinct for you; if you hold on to it, you will never go astray: God's book and the sunnah of his prophet. "

Criticism of the Sunnah

The inner-Islamic critics of the Sunna identify several weaknesses of the Sunnah. First of all, it is problematic that the exact wording of the tradition is not known. Since the reports are usually given only for content and not verbatim, they are not trustworthy. This is especially problematic because people always let their understanding flow into the reproduction of what they have heard. Thus, in contrast to the Koran, there would not only be difficulties in interpreting the text, but the textual basis itself would give rise to doubts and uncertainty. Finally, from the assumed late written fixation of the ḥadīṯe and the partially incorrect transmission, it is deduced that at least in the beginning it was not perceived as an essential part of religion, otherwise greater efforts would have been made to secure the material. In addition, the question arises as to why the content of the Sunnah was not revealed in the form of the Koran, what is the meaning of two different revelations.

Modern critics also particularly harshly criticize the requirements of the ʿilm ar-riǧāl as an auxiliary science, as this is very prone to errors for several reasons.

Critics of the concept also point to different interpretations of the verses that are used to legitimize the Sunna as a second source of law. Instead, attention is drawn to other text passages in the Koran which, according to the understanding of the Sunnah opponents, suggest a ban on imitating Muḥammad, such as Sura 6, Verse 38.

There are many proposals for reforming the Sunnah ; they range from the need for rigorous abolition, to more minor changes - such as a stronger involvement of the substantive component of a hadith its authenticity in the assessment, yes traditionally mainly due to the quality of isnads was moored.

The rejection of the sunna was formulated most radically by the so-called ʾahl al-qurʾān , who identified the use of the sunna as one of the main causes of the difficult situation in Islamic countries in the 20th century. It formed in Lahore among others under ʿAbd Allāh Ğakrālawī , but soon split up into several groups. She tried to prove that all essential points of belief could be derived from the Koran alone. Critics who accepted the necessity of the Sunnah as such, but wanted to place it on a more secure foundation or to weaken its meaning a little, have found greater dissemination and impact .

One influential current that sought an answer to this question, among other things, was the salafīya . Even if it was very differentiated in itself, a common concern was the devaluation of the taqlīd , the observance of the rules of a certain school of law, compared to the ijtihād , the independent finding of legal norms based on the Koran. Closely related to this was a much more skeptical assessment of the authenticity of a large part of the ḥadīṯ material and thus ultimately an upgrading of the Koran. The reformist thinker and religious scholar Raschīd Ridā (1865-1935) claimed for himself the right to reevaluate the sources based on iǧtihād and came to the conclusion that only aḥādīṯ ʿamalīya were legally relevant, which also in the way of mutawātira , i.e. from one special large group of people, must have been handed down. Sir Saiyid Ahmad Chān came to a similar assessment, although he did not reject the Sunnah in its entirety, but rejects the majority of the traditions as implausible.

Sunna as an evaluation category in Fiqh

In Fiqh , the term sunna is also used as a religious legal evaluation category ( ḥukm šarʿī ) for actions. In this case it serves as a synonym for the terms mandūb (“recommended”), mustaḥabb (“desirable”), taṭauwuʿ (“voluntary performance”) or nafl (“good work that goes beyond the obligation”). Carrying out such a sunna action should be rewarded in the hereafter, but non-performance should not have any negative consequences.