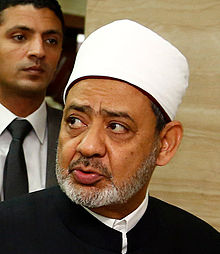 Ahmed el-Tayeb, the current Sheikh of the Azhar.

The Sheikh of the Azhar (also known as Sheikh al-Azhar , Arabic شيخ الأزهر Shaykh al-Azhar , DMG Shai-al-Azhar ) is the head of the Azhar , an Islamic academic institution of international standing, which has its seat in Cairo and is maintained by the Egyptian state . It is one of the most prestigious offices within Sunni Islam, some Muslims even consider the Sheikh of Azhar to be the ultimate Islamic authority. He has a great influence on the followers of the theological traditions of the Ash'arites and Maturidites worldwide.

The al-Azhar Sheikh , who is appointed for life , heads the Azhar University, the Azhar Mosque and the Academy for Islamic Studies and bears the title of "the Grand Imam " ( al-imām al-akbar ). The current official is Ahmed el-Tayeb (born 1946). Other well-known personalities who held this office were Sheikh Mahmūd Schaltūt (from 1958 to 1963) and Muhammad Sayyid Tantawi . For a list of past officials see here .

Until 1961, the Sheikh of Azhar was elected by a body of senior scholars, and since then he has been appointed by the government of the Arab Republic of Egypt . Other high religious offices in Egypt are that of the Grand Mufti of Egypt , which has been held by Shawki Ibrahim Allam since 2013 , and that of the Egyptian minister of religion .