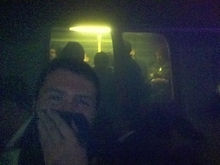 Many people were trapped on the London Underground .

Within a short time there was a total of four explosions, triggered by bomb carriers (so-called “ backpack bombers ”) in three underground trains and a double-decker bus . 56 people (including the four suicide bombers) were killed and over 700 injured. Many people were trapped in the affected trains until the afternoon.

The attacks are also referred to in the British media under the abbreviation 7/7 (seven-seven), based on the Islamist terrorist attacks on September 11, 2001 in the USA, which became known as 9/11 (nine-eleven). 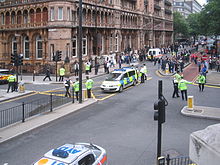 Three of the explosions took place in quick succession between about 8:50 a.m. and 8:53 a.m. London time in moving underground trains (sometimes when entering or leaving the station). One of them happened on Liverpool Street and killed seven people. Seven people also died in a detonation on Edgware Road .

The worst of the attacks occurred on the Piccadilly Line between King's Cross St. Pancras and Russell Square . It took place in the middle of the tunnel , which made the rescue work difficult, and resulted in 28 deaths. Relatives of the missing complained about the slow recovery . The authorities asked for understanding, as the technical problems in the tunnel made it difficult to secure evidence.

The fourth detonation just under an hour later at 9:47 a.m. in a double-decker bus on the northeast corner of Tavistock Square near Russell Square claimed another 13 lives. 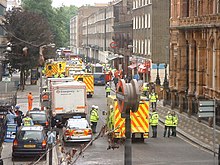 Due to the incidents, many subway stations were initially evacuated and the entire bus and subway network shut down. In the evening, public transport was partially resumed. The banking district and well over 40 streets were temporarily closed. Trading on the London Stock Exchange has been suspended.

Prime Minister Tony Blair temporarily left the G8 meeting in Scotland , which was taking place at the same time, because of the attacks , in order to be able to get an idea of ​​the situation in London.

The four suspected terrorists were found on video footage. Three of the four perpetrators were British of Pakistani origin from the Leeds area. When their homes were searched, explosives were found.

Mohammad Sidique Khan accuses British society and Tony Blair's government of being directly responsible for the attacks. He goes on to say that his terrorist group is waging a regular war against democratic British society. He was a soldier.

In initial statements immediately after the events, the authorities ruled out terrorist attacks and gave short circuits or collisions of subways as possible causes. According to later press reports, this was deliberately misinformation in order to avoid panic and to gain time to assess the situation.

However, Scotland Yard later confirmed that at least one bomb had been found on a tube train. Furthermore, the remains of an explosive device were discovered in the double-decker bus, so that it was now considered certain that the explosions were caused by attacks. According to witness Bruce Lait, who survived the attack near Aldgate East train station, it looked like the source of the explosion could have been under the subway car because metal parts were bent upwards by the explosion.

An alleged group called the "Secret Group of Al-Qaeda Jihad in Europe" , which had never appeared before, reported - probably incorrectly - on the Internet during the morning. The statement said the attacks were in retaliation for British military operations in Afghanistan and Iraq . The group threatened further attacks in Denmark and Italy . However, the confession had not appeared on any of the usual Al Qaeda websites.

The following week, numerous arrests took place in Pakistan and Egypt . A biochemist of the University of Leeds was in Cairo arrested and interrogated. He was suspected of having built the explosives.

On April 9, 2006, the British newspaper The Observer published conclusions from an investigation report, according to which a connection between the perpetrators and al-Qaeda could not be established.

On June 6, 2006, the London Public Prosecutor's report was published. I.a. was criticized in the fact that no radio communication was possible in the tunnels of the London Underground, which meant that the police and fire brigade had to use runners to communicate. The driver also had no opportunity to report a problem to the control center. The attempt to communicate via the cellular network failed because the network had collapsed. Furthermore, first aid boxes were tightly closed and emergency exits blocked. In addition, emergency vehicles were directed to the wrong subway stations and the first rescue workers only reached the subway train 30 minutes after receiving the emergency call. The emergency numbers were also overloaded for hours.

The first session of the investigation into the exact circumstances of the attacks began on October 11, 2010 in London. The investigation lasted five months. About 240 witnesses testified at the public hearings.

After the attacks, various incidents occurred in the country, which the police interpreted as possible acts of revenge. Several mosques were attacked and some were pelted with incendiary devices. On July 13, a 48-year-old Pakistani man was beaten to death by a group of youths in Nottingham.

Just a fortnight after the attacks, on July 21, 2005, there was another terror alert in the British capital. Again there were several sets of bombs that were to be detonated almost simultaneously in the London Underground. However, this attack did not go as planned because the bombs did not detonate, which means that this time there were no victims except for one injured. The British police were able to arrest several suspects as part of an extensive operation. In 2007, six alleged assassins stood on trial and claimed it was all "a joke". Four of the accused - Muktar Said Ibrahim, Yassin Omar, Hussain Osman and Ramzi Mohammed - were sentenced on July 9, 2007 by the Woolwich Crown Court for "conspiracy to murder" to prison terms of (at least) 40 years. Manfo Kwaku Asiedu was sentenced to 33 years imprisonment on November 20, 2007 for “conspiracy to cause an explosive explosion” followed by deportation to Ghana. Adel Yahya was sentenced to six years and nine months in prison for "assisting in a terrorist act".

In an incident in Stockwell Underground Station in London on July 22, 2005, the Brazilian citizen Jean Charles de Menezes, who lives in London, was killed by plainclothes officers with multiple headshots. De Menezes had been mistaken by the police for a suspect for the attempted attack and was deliberately killed as a potential assassin by an armed action team.

Over a year after the attacks, the UK implemented a five-tier terror alert system.

In Hyde Park , a memorial to the victims of the attacks was built. It consists of 52 stainless steel columns, each 3.5 meters high, on each of which is a plaque with the name of one of the victims.

The attacks intervene in the film Hereafter (2010). The attacks are also briefly discussed in the thriller Zero Dark Thirty (2012).