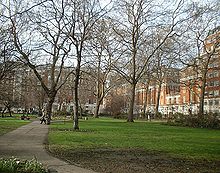 The Tavistock Square is a leafy square in Bloomsbury , London . It was designed in the 1820s by the architect Thomas Cubitt . At the central point of the square is a statue of Mahatma Gandhi , which was erected in 1968. There is also a memorial for conscientious objectors, inaugurated in 1995, and a cherry tree planted in 1967 in memory of the victims of the atomic bombing on Hiroshima .

The name of the square is reminiscent of the title of Marquess of Tavistock , a subordinate title of the Duke of Bedford , which is used by his eldest son as a courtesy title . The square was originally part of the Dukes' town seat, Bedford Estate .

In the immediate vicinity of the square there are also several hotels and the headquarters of the British Medical Association (BMA).

On July 7, 2005, a double-decker bus on the northeast corner of Tavistock Square was blown up by terrorists in the terrorist attacks on London .