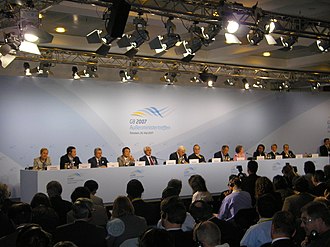 Foreign ministers meeting of the G8 countries in 2007

The foreign minister is a member of the government of a sovereign state. He is the main person in charge of implementing a country's foreign policy .

In addition, the foreign minister is the highest representative of a state alongside the head of government and is addressed as His Excellency (SE) outside his country . In the field of international relations , he is generally regarded as the fully authorized representative of his country.

In Germany the official name is Federal Minister of Foreign Affairs , he heads the Foreign Office . Heiko Maas ( SPD ) has been Foreign Minister in the Merkel IV cabinet since March 14, 2018 .

In Italy , the official name of the Minister for Foreign Affairs responsible for foreign policy is Ministro degli Affari Esteri . Luigi Di Maio ( Movimento 5 Stelle ) has been the incumbent since September 2019 .

In the European Union the official name is High Representative of the EU for Foreign and Security Policy , he heads the European External Action Service . Josep Borrell has been the incumbent since December 2019 .

In the Principality of Liechtenstein , Government Councilor Katrin Eggenberger ( FBP ) is responsible for the foreign affairs, justice and culture departments.

In the United States, the head of the State Department , the Secretary of State , is responsible for foreign policy. He is the highest ranking member of the cabinet. Mike Pompeo ( Republican Party ) has been Secretary of State since April 26, 2018 .

Lists of foreign ministers in Europe by state