Marianne brook Meier (* 3. June 1950 in Sarstedt ; † 17th September 1996 in Luebeck ) committed in 1981 in a hall of the District Court Lübeck vigilantism and shot the suspected murderer of her daughter Anna Bach Meier. She was sentenced to six years' imprisonment in 1983 for manslaughter and illicit gun possession.

Marianne Bachmeier grew up in Sarstedt near Hanover, where her parents had fled from East Prussia . The couple separated and the mother remarried.

Murder of the daughter

On May 5, 1980, Anna Bachmeier, then seven years old, did not go to school with her mother's permission. She wanted to visit a friend of the same age and fell into the hands of 35-year-old butcher Klaus Grabowski. He is said to have held her at home for several hours and then strangled her with pantyhose. According to prosecutors , he tied the girl, packed it in a cardboard box and then deposited it in a hollow on the bank of a canal. He is said to have placed the corpse in a hole and covered it with earth. In the evening he was arrested in the restaurant Im alten Zolln , because he had previously revealed himself to his girlfriend, who then went to the police.

Klaus Grabowski was a previously convicted sex offender and had previously been convicted of sexually abusing two girls. While in custody, he was neutered in 1976 and two years later underwent hormonal treatment . Marianne Bachmeier and Christian Berthold (Anna's biological father) later filed an unsuccessful criminal complaint against the urologist who had used the hormone treatment on Grabowski and thus, in their opinion, restored his dangerousness.

Grabowski said he did not sexually molest the girl. During the police interrogation, he said that the girl had wanted to tell the mother that he had touched her immorally with the aim of extorting a D-Mark from her.

Vigilante justice in the courtroom

Marianne brook Meier smuggled on March 6, 1981, a gun of the type Beretta 70 caliber .22lr , in the courtroom of the Lübeck District Court and shot with it on the third day of the trial in the criminal trial to due murder accused to her daughter Anna Klaus Grabowski. She aimed the gun at Grabowski's back and pulled the trigger eight times. Seven of the shots hit; the 35-year-old defendant was killed instantly.

The so far best known case of vigilante justice in the Federal Republic of Germany triggered a lot of media coverage and was discussed controversially in public. Television teams from all over the world traveled to Lübeck to report on this case. Reporters questioned numerous passers-by on the street about the crime of the 31-year-old single woman. Part of the population showed understanding for the crime, others condemned it as incompatible with the rule of law. Marianne Bachmeier sold her life story for around 250,000 Deutschmarks exclusively to the news magazine Stern . She confided in the star reporter Heiko Gebhardt on which her during her detention was allowed to visit. Her role as a mother was also controversial, since shortly before Anna's death she had intended to give the child to foster parents.

On November 2, 1982, Marianne Bachmeier was initially charged with murder in court. The prosecution later dropped the murder charge. After 28 days of trial, on March 2, 1983, the jury chamber of the Lübeck Regional Court passed the conviction of manslaughter and illicit gun possession to six years imprisonment. This ended one of the most sensational processes of the post-war period . After three years in prison, she was released early from prison.

Marianne Bachmeier married in 1985 and moved to Lagos , Nigeria with her husband, a teacher, in 1988 . There they lived in a German camp where their partner taught at the German school. She divorced him in 1990 and went to Sicily , where she cared for the dying in a hospice in the capital, Palermo . After finding out that she had cancer , she returned to Germany.

In 1994, 13 years after her act, she gave an interview on Deutschlandfunk : “I think it makes a very big difference whether I kill a little girl because I am afraid that I will have to go to prison for the rest of my life. And then also the 'how', that is, that I stand behind the girl and pull, that's now literally from his statement: 'I hear something coming out of her nose, then I pull harder, then I can see the Do not leave the corpse '. "

On September 21, 1995, she appeared in the talk show Fliege on ARD . She admitted that after careful consideration, she shot her daughter's alleged murderer in order to speak right about him and to prevent him from spreading untruths about Anna. 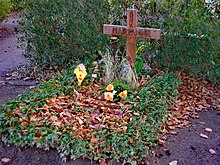 The grave of Anna Bachmeier and her mother Marianne at the Lübeck Burgtorfriedhof in 2008 (the grave site has now been leveled, before or in 2014)

Marianne Bachmeier died on September 17, 1996 at the age of 46 of pancreatic cancer in a Lübeck hospital. It had actually been her wish to die in her adopted home of Palermo. Before her death, she asked the NDR reporter Lukas Maria Böhmer to accompany her with the film camera in the last phase of her life. She was buried in the grave of her daughter Anna at the Burgtorfriedhof in Lübeck.