The consul (plural: consuls, derived from the Latin title of the highest Roman state officials: consul , adviser ') is an official who is officially appointed by a state (sending state ) to safeguard the interests of its relatives and its trade in a foreign country (receiving state) is. The authority that the consul represents is called the consulate . Consulates are listed according to their diplomatic rank as consulate general , consulate, vice consulate or consular agency. The official position is either effective with a consular officer or a non- official function as an honorary consulate . Most countries in the world also offer consular services in the consular sections of the embassy .

The consul differs from the (political) envoys or ambassadors of a state in that it is more administrative than diplomatic position and activity: while the diplomat has to represent the interests of his government vis-à-vis the government of a foreign power, the consul is above all the interests of the Nationals of the sending state are obliged in the receiving state. Consulates are therefore not regarded as diplomatic representations of a state, they are rather foreign representations of their own kind (consular representations) . Typical consular matters are passport, visa and residence issues, legal assistance and the like.

Consulate General of the Federal Republic of Germany in Houston 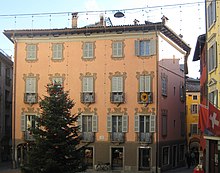 Seat of the German honorary consul in Lugano , Switzerland

A distinction is made between professional consuls (also called consules missi in Latin) and honorary consuls (also: commercial consuls , honor consuls , election consuls or Latin consules electi ). Depending on the rank, the official title is consul general, consul, vice consul or consular agent .

Consuls must also observe the law of the receiving state in their official acts. The authority to perform official acts on the territory of a foreign power is determined by bilateral or multilateral international treaties and is  regulated in most states by the Vienna Convention on Consular Relations (WÜK).

A career consul is an official of the regular foreign service who heads a (general) consulate or is an employee of a consular mission or an embassy. A prerequisite for the office is a passed career test for the senior or senior foreign service. The professional consul as head of a consular mission must be granted the exequatur by the host country so that he can begin his service. On the basis of the Vienna Consular Convention , professional consuls enjoy official immunity in the contracting states, i.e. they are not subject to the jurisdiction of the receiving state with regard to the performance of their official or business activities . Official immunity includes not only official acts as such, but also acts that are indirectly related to them (e.g. driving a car to an official appointment).

As a rule, career consuls are citizens of the sending state.

An honorary or elective consul (also honorary consul general ) is an honorary consul ( lat. Honor 'honor'). The name trade consul, which is also still in use, stems from the fact that originally merchants were primarily appointed honorary consuls, as their work primarily served to facilitate trade relations. The honorary consul is an honorary officer . The prerequisite for his appointment today is that the applicant appears suitable for the office based on his personality, his professional experience, his position in the receiving state, his familiarity with the circumstances in the area of ​​responsibility intended for him ( consular district ) and his language skills. Both Germans and foreigners can be appointed honorary consuls of the Federal Republic of Germany. However, he is mostly a citizen of the receiving state, i.e. the state in which the interests of the sending state are represented. His work is not remunerated. The use of the fees charged for the services varies according to the sending country. Austrian honorary consuls, for example, have to pay all fees, while honorary consuls from other countries can keep part or all of the fees collected.

The honorary consul, if he is a citizen of the receiving state, only enjoys official immunity. This only grants protection from criminal prosecution in connection with the performance of consular duties . Often there are doubts about the scope of this official immunity, especially in the case of traffic offenses that are connected with a trip by an honorary consul to an official appointment.

Duties of the consul

State treaties, in particular the Vienna Consular Convention, regulate which official acts the consuls may undertake towards the receiving states under international law. The tasks of a German consul and the way they are performed are regulated in the German Consular Act for his relationship with Germany.

It is the task of the consuls to issue passports to the nationals of the sending state and to issue visas or corresponding documents to those who wish to go to the sending state (Art. 5 lit.d WÜK). You are the passport authority within the meaning of Section 19 (2) PassG.

Help through advice and action

Consuls have to give German and domestic legal persons advice and assistance at their own discretion (Art. 5 lit.e WÜK, §§ 1, 5 Paragraph 1 Clause 1 KG). It is the task of a consul to provide Germans who are in need of help in their official district with the help they need if the emergency cannot be remedied in any other way. The assistance can also consist in granting legal protection (representation before courts or authorities or ensuring appropriate representation, Art. 5 lit. i WÜK, § 5 paragraph 3 sentence 2 KG) or in the creation of an opportunity to travel to a specific location ( Section 5 (4) KG). Assistance can also be provided by submitting judicial and extrajudicial documents (such as citizenship matters , motor vehicle deregistrations) and handling requests for mutual assistance, provided this corresponds to applicable international agreements (Art. 5 lit.j WÜK). In the event of natural disasters, wars or revolutionary entanglements, the consul should also take the necessary measures to provide Germans with help and protection, provided that damage has occurred or that an occurrence is to be expected (Section 6 KG). Consuls also look after German prisoners (Section 7 KG). They notify the relatives of deceased Germans and help with the transfer (Section 9 (1) KG).

In addition, the consul fulfills the tasks of an organ of voluntary jurisdiction , notarial tasks and tasks of an auxiliary body of the judiciary (Art. 5 lit f, lit. g WÜK, §§ 8 to 17 KG). The consuls also perform certain administrative activities. These are in detail:

Tasks of the voluntary jurisdiction:

Duties of an auxiliary body of the judiciary:

The certification and acceptance of affidavits, the certification of declarations of intent, the acceptance of statements should only be carried out by consuls if they are qualified to act as judges or if they are specially authorized to do so by the Foreign Office . Consuls can only conduct interrogations and hearings that are intended to replace a judicial interrogation, record declarations and take oaths if they are qualified to hold judicial office or if they have special authorization. German consular officers no longer conduct marriages. A restriction for honorary consuls is that they can only confirm the authenticity of German public documents by means of a special authorization.

The consuls are active in shipping and seaman's affairs (Art. 5 lit. k, lit. l WÜK). According to the Vienna Consular Convention (Art. 5 lit. k, lit. l), consuls can exercise the rights provided for in the laws and other legal provisions of the sending state to control and supervise seagoing and inland waterway vessels that have the nationality of the sending state and the exercise aircraft registered in this state and about the crews of these ships and aircraft and provide assistance to ships and aircraft and their crews, receive declarations about the voyage of these ships, check and visa ship's documents, without prejudice to the powers of the authorities of the receiving state, surveys of incidents during the voyage conduct and, to the extent permitted by the laws and other legal provisions of the sending state, resolve disputes of any kind between the captain, officers and men. The German laws no longer provide for special powers for the German consuls in shipping and seafaring matters. In the past, the German consular laws provided for corresponding powers to exercise these powers permitted under international law ( Other previous tasks ).

The legal relationships between German consuls and Germany result from the Consular Act (KonsG).

German consuls used to perform a number of other tasks.

The other earlier tasks of the consuls are illustrated using the example of the federal law on consuls of the North German Confederation, which was also adopted in a comparable form in the Reich legislation.

In the context of the consul's task as the administration of justice, execution of foreclosures on German enforcement titles by the consul with the consent of the government of the receiving state came into consideration. In legal disputes between Germans and with strangers, the consuls were not only called upon to mediate the conclusion of settlements at the request of the parties, but also to act as arbitrators if they were appointed by the parties as arbitrators in the form prescribed by local law .

By 1913, a German who lived abroad continuously for more than 10 years lost his German citizenship . The ten-year period could be interrupted by the entry in a register at the German consulate.

Tasks in the military substitute system

Professional and honorary consuls had to accept the legally required registration of German conscripts in their district and check it for correctness. Professional consuls and especially authorized honorary consuls had to carry out the registration system abroad, in particular to create and maintain the military records and to give a consular report. They prepared the medical examination and directed it if it was not carried out in border towns. The consul decided on military capabilities. The consul finally sent the military district command's presentation order. In the Federal Republic of Germany, on the other hand, the conscription of Germans who are permanently abroad and at the same time have their livelihood abroad is suspended. However, they were subject to military surveillance .

The consuls had to provide assistance and support to the ships of the Kriegsmarine and their crew. In particular, they had to inform the ship commanders about the existing regulations and local customs in their district with regard to foreign warships as well as about epidemic infectious diseases prevailing there . If crews from warships deserted, the consuls at the local and state authorities had to take the necessary steps to get the sailors back into possession. The consuls had to call on the assistance of the commanders of the warships to protect the interests for which they were responsible, in particular for the transport of criminals and people in need.

They had to receive the report from the skipper and report to the German government that they had failed to report. They formed the drafting authority for the ships of the merchant navy in the port of their official district. You were authorized to exercise police power over these ships. If crews deserted from such ships, the consuls had to take the necessary steps to recapture the sailors at the ship's request to the local or regional authorities. The consuls were authorized, at the request of the parties involved, to appoint a new skipper instead of a deceased, sick or otherwise unfit to operate a ship. For the exercise of the power of the consuls to cooperate in the sale of a ship by the skipper and in entering into Bodmerie business , as well as in relation to the provisional resolution of disputes between skipper and crew, they had to refer to the provisions of German commercial law (Art. 499, 537, 547 . 686. of the General German Commercial Code).

The consuls had to monitor compliance with the rules governing flying the flag.