from Wikipedia, the free encyclopedia
This is the spotted version , flagged on June 20, 2020 . There is 1 pending change that has yet to be viewed. 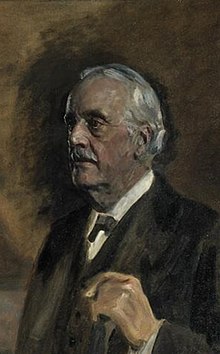 Arthur Balfour circa 1920. Portrait study by James Guthrie for Statesmen of World War I .

He was the eldest son of the politician James Maitland Balfour (1820-1856) from his marriage to Lady Blanche Mary Harriet Gascoyne-Cecil († 1872). His father came from a Scottish gentry family . His mother came from the influential English political family Gascoyne-Cecil of Salisbury . He attended Eton College and studied at Trinity College of Cambridge University . In 1874 he was first elected to the British House of Commons for the Conservative Party . From 1878 to 1880 he was the private secretary of his uncle Robert Gascoyne-Cecil, 3rd Marquess of Salisbury , whom he accompanied to the Berlin Congress in 1878 .

In the early 1880s, Balfour emerged as a member of the circle of young lateral thinking conservatives that developed around Randolph Churchill within the Conservative Party ("Fourth Party"). After he unequivocally decided in favor of the latter in the conflict between Churchill and his uncle, Balfour became Chief Secretary for Ireland in his cabinet in 1887 and thus early in his career came into contact with the most pressing problem in British politics of the era: the Irish demand for compliance Home Rule . The reputation he had gained in this dispute led to Balfour being elected Leader of the House of Commons in 1891/92 and from 1895 to 1905 . 3 His political career peaked in 1902 when he became Prime Minister of the United Kingdom, succeeding his uncle. He held this office until 1905, when he was the last prime minister to hand over the business of government to the opposition due to internal party disagreements. The most important political event of this epoch was the renunciation of the splendid isolation of Great Britain by the entente cordiale with France. From 1902 to 1911 Balfour was also chairman of the Tories. However, he did not succeed in preventing the split in the party in view of the protective tariff policy of the unionist Joseph Chamberlain . It was not least this disagreement that led to a severe election defeat for the Conservatives in early 1906. Balfours himself lost his seat in parliament, but quickly moved back into the lower house through a by-election in another constituency.

Regardless, Balfour remained one of the most influential men in British politics. The main reason for this was the unbroken loyalty that the still conservative majority of the second Chamber of Parliament, the House of Lords, showed him. The House of Lords served him as a reliable political lever and was ridiculed by liberal David Lloyd George as " Balfour's poodle ". Many laws were blocked by the conservative majority in the House of Lords, which led to new elections (twice) in 1910. Both lost Balfour's Conservatives; although they were able to win a few parliamentary seats, it was not enough to form a government, as the Liberals were supported by the Labor Party and the Irish nationalists. After three consecutive election defeats, Balfour faced violent attacks. A group around Lord Halsbury opposed Balfour's leadership; Well-known Tories such as FE Smith and Edward Carson were also among Balfour's opponents. In addition, two members of Balfour's own family, Lord Hugh Cecil and Lord Robert Cecil, joined this group. Affected by the ongoing criticism from within the party, Balfour finally announced his resignation on November 8, 1911 during an appearance in his constituency, the City of London . At the Carlton Club meeting that was scheduled a few days later , Andrew Bonar Law was elected as his successor.

In the coalition government formed during the First World War by Herbert Henry Asquith, Balfour held the post of First Lord of the Admiralty (Minister of the Navy) from 1915 to 1916 as successor to Winston Churchill . After David Lloyd George took over government , he became Secretary of State. In this role he went down in history with his Balfour Declaration (November 2, 1917). In it he assured Walter Rothschild, 2nd Baron Rothschild , that the British government would support the Zionists in establishing a "national home for the Jewish people" in Palestine. This made him a pioneer of the UN partition plan of 1947, which was followed by the founding of Israel in 1948 .

In the House of Commons he was MP for the Hertford constituency from 1874 to 1885 , from 1885 to 1906 for Manchester East and from 1906 to 1922 for the City of London . On the occasion of the general election in 1922 he resigned from the House of Commons and was raised on May 5, 1922 as Earl of Balfour and Viscount Traprain in to the hereditary peer , whereby he became a member of the House of Lords . Since Balfour was unmarried and childless, the award was made with the special addition that in the absence of male descendants of his own, the title could also be inherited by his brothers and their male descendants.

From 1919 to 1922 and again from 1925 to 1929 Balfour was Lord President of the Council in the Cabinet. In this capacity, he published the Balfour Note on August 1, 1922, on the connection between reparations and inter-allied war debts : in the interests of a rapid stabilization of the world economy, the greatest possible moderation should be exercised when founding both types of debt. The British government renounced all political debt payments, both in terms of German reparations and war debts that went beyond the debt servicing required by the USA.

He also played an important role in the process of transforming the British Empire into the Commonwealth of Nations . His name is the Balfour Report drawn up under his chairmanship in 1926 , the core of which is the formulation of the complete sovereignty of the Dominions from the British motherland.

In 1883 Arthur Balfour was President of the Society for Psychical Research . He is also a member of the renowned London Travelers Club and was (around 1912) Honorary Vice President of the Eugenics Education Society. In 1902 he was elected to the American Academy of Arts and Sciences . In 1925 he became a Fellow of the Royal Society of Edinburgh .

Balfour in the judgment of contemporaries

Frederick Edwin Smith, 1st Earl of Birkenhead , conservative top politician and represented together with Balfour in various governments from 1916 to 1929, judged in his work "Great Contemporaries", an overview of the most important men in public life in Great Britain in the 1920s, that “Balfour is the finest spirit who has turned to politics in our time”. Winston Churchill remarked to his personal physician, Lord Moran, after World War II that Balfour would have been one of the five people he would have liked to have seen his late life triumph as leader of the British nation in the war.