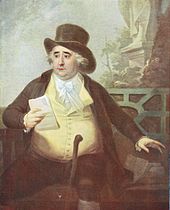 Fox was the son of Henry Fox , Secretary of State George II, and was raised to Baron Holland by him in 1763. After attending schools in Westminster and Eton and the University of Oxford , he toured the continent. In 1768 he became a member of Parliament through his father's mediation as a representative of the Midhurst patch , where he initially supported the Ministry of Frederick North and was so distinguished by his oratorical talent that he was promoted to Lord of the Admiralty in 1770 and Chancellor of the Exchequer in 1772 .

He fell out of favor with the king, mainly because of his opposition to the law on marriages in the royal family of 1772 and his motions to punish a press offense. In 1774 he was discharged from government, whereupon he allied himself with the leaders of the opposition Whigs , Edmund Burke and Charles Pratt, 1st Earl Camden (1714-1794). First of all, he attacked the government's American policy by defending the colonies' right to self-tax and advocating peace with the rebellious colonies.

In 1780, Fox was re-elected to the House of Commons for Westminster. When North resigned in 1782, he became a member of the new Rockingham - Shelburne government as the first British foreign secretary and proposed the immediate recognition of American independence, but resigned from his office after Rockingham's death due to differences with Shelburne, whereupon the king replaced the young William Pitt made to his right hand. A bitter struggle began between the two, which in 1783 brought about the overthrow of the Shelburne-Pitt Ministry, while Fox and North joined the coalition government formed by the Duke of Portland as Secretary of State , which made peace with America.

After only nine months, this government, in which Fox and not the Prime Minister was the dominant figure, fell. The law introduced by Fox to end the abuses of the East India Company and bring the administration of the East Indian colonies into the hands of the government was passed in the House of Commons, but rejected by the Lords under pressure from the King.

The king immediately dismissed the government and placed Pitt at the head of the new cabinet. Fox was re-elected for Westminster and became one of the leaders of the opposition. He fought the government at the trial of the East Indian governor Warren Hastings , proposed the abolition of slavery in 1787 and, at the first signs of the king's insanity, asserted the Prince of Wales' rights to the regency, while Pitt passed the decision of the reign to Parliament reserved wanted to know.

The French Revolution advocated Fox, which he fell out with Burke and most of his other political friends. Having 1792-1797 initially at the head of a small opposition had last vain fought almost alone the government against revolutionary France and its repressive measures in England warlike policy, put he 1797 St. to his estate Ann's Hill in Chertsey back . There he devoted himself to agriculture and literary pursuits.

After the Peace of Amiens in 1802 he made a trip to France. After his return he succeeded through the unification of the Whigs in the overthrow of Addington's cabinet , which was planning a new war with France, but the king opposed his entry into the government, which this time Pitt himself proposed. Fox again became an exposed representative of the opposition until Pitt's death in January 1806 forced the king to put up with a Grenville cabinet , in which Fox became Secretary of State for the third time.

He advised an understanding with Napoleon . When the French emperor was not ready, Fox advocated a continuation of the war, but he died on September 13, 1806 of ascites .

Fox is considered one of the most important speakers in English parliamentarism. As a private citizen, he suffered from financial problems due to his gambling addiction.

In 1816 a statue was erected for him in Bloomsbury Square , London, and a memorial in Westminster Abbey in 1818 .