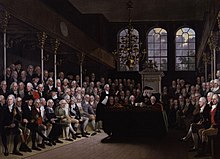 William Pitt speaking in front of the House of Commons , painting by Anton Hickel

The second son of William Pitt the Elder began studying at Cambridge when he was 14 . Here he met William Wilberforce , with whom he had a lifelong friendship. Through the influence of the Duke of Rutland, he gained a seat in the House of Commons for Aggleby. He joined the Whig Party , which his father had led until his death, spoke against the American War ( American War of Independence , 1775-83), contributed significantly to the overthrow of the Prime Minister North in 1782 and achieved through his insistence that the test act be abolished , Emancipation of the Catholics and especially on reform of parliament great popularity. He turned down subordinate offices that were offered to him; but when Charles James Fox resigned in 1782, Pitt entered the Shelburnes Ministry as Chancellor of the Exchequer . Since then he has been the declared opponent of Fox and its policies. He did not join the coalition ministry Fox-North, which was formed after Shelburne's fall in 1783, and fought fiercely in the House of Commons the Indiabill introduced by Fox, according to which all rights of the East India Company were to be transferred to the state; it went through anyway, but was rejected in the House of Lords by the direct action of the king. George III then dismissed the Ministry and appointed the 24-year-old Pitt on December 19, 1783 as the youngest Prime Minister in British history.

The House of Commons was dissolved in 1784 and Pitt had an overwhelming majority in the new Parliament. By an India Act , which he introduced, the East India Company was made subject to a control authority to be appointed by the Crown. With energy and prudence, Pitt, under the guidance of Adam Smith, put the broken financial system into order and raised public credit by introducing repayment funds. In 1786 he achieved a favorable trade agreement with France . From 1792 to 1806 he was Lord Warden of the Cinque Ports .

On April 2, 1792, there was a long debate in Parliament - introduced by William Wilberforce - about the ban on the slave trade . Although already exhausted - it was already five o'clock on April 3rd - Pitt gave the best speech of his career. He analyzed all the arguments of his opponents without losing the thread. He implored the House to immediately see Africans as human again. Towards the end of his speech he quoted, slightly modified, from the Georgica (1, 250-251) by Virgil :

Nos primus equis oriens afflavit anhelis; illic sera rubens accendit lumina vesper.
( The beginning [day] with [its] puffing horses was at first kind to us ; there [but] the reddish evening kindles the late lights.)

At these words, the first rays of sunshine allegedly appeared in the lower house behind the speaker. The vote then resulted in 230 votes to 85 for the gradual abolition of the slave trade - a breakthrough that eventually led to a total ban in 1808.

The excesses of the French Revolution made Pitt, who had been joined by many former Whigs under Burke's leadership since 1791 , however, increasingly conservative. He endeavored to prevent the seizure of democratic ideas in England through the Aliens Bill (a tightened control of foreigners entering the country), the temporary suspension of the Habeas Corpus Act (1794-1801) and the restriction of association, assembly and To counteract press law vigorously. The convention in Paris declared him an "enemy of the human race".

The uprising of the Irish was suppressed with bloody severity. The public creditworthiness, which was endangered as a result of the costly, albeit unsuccessful, war with France and repeated bad harvests was secured in 1797 by the suspension of the obligation to redeem gold . In addition, the introduction of an income tax and repeated borrowings provided the means to continue the war and enabled Pitt to leave Bonaparte's post- Brumaire peace proposals unanswered. Through colossal bribery and brilliant pretenses Ireland was completely united with England in 1800 in order to make any independent movement impossible for it. But when King George III. refused to endorse the emancipation promised by Pitt to the Irish Catholics , Pitt submitted his resignation on February 16, 1801. However, since the king suffered from an insane attack repeatedly at this time, the appointment of the designated successor Addington was delayed , so that Pitt temporarily continued the official business until March 14, 1801. The Addington government concluded the Peace of Amiens in May 1802 .

When the war broke out again in 1803, Pitt and Charles James Fox overthrew the powerless Addington Ministry and resumed his previous office on May 15, 1804. He was now heavily armored and brought about the third coalition against France. The tremendous efforts had a very negative effect on his already weak constitution. The news of the outcome of the battle at Austerlitz gave him the fatal blow. He died on January 23, 1806 with the sigh: "Oh my country!"

He was buried at Westminster Abbey , and by parliamentary order the nation took on the payment of £ 40,000 in debt left by Pitt, who, even as a senior official, had never thought of raising a fortune. His private life was characterized by simplicity and kindness. Pitt as a speaker was praised for his clear understanding, the excellent dialectic, the perfect inner and outer rounding off.

The Pitt Islands in Antarctica are named after him .

Pitt's brother-in-law was the politician and inventor Charles Stanhope, 3rd Earl Stanhope , who created the UK's first iron printing press . His daughter Hester Stanhope , later famous as an adventurer, served Pitt as a housekeeper until his death before she left for the Orient.