Grade of the Swiss Army

The designations of the degrees in the Swiss Army (equivalent to ranks in Austria and Germany) were determined by Parliament in Art. 102 Military Law (MG) . The Federal Council can introduce additional ranks for the crew and NCOs . He made use of this right for Army XXI in Art. 5 of the Ordinance on the Organization of the Army (VOA) of November 26, 2003, which has become superfluous since January 1, 2011 through an amendment to Art. 102 MG . A change in the law by parliament is necessary to change the officer degrees.

Those who have been promoted to a certain degree will keep it even if they no longer hold the position (applies to specialist officers only after 6 years of service). Members of the armed forces who have been released from compulsory military service can continue their last degree with the addition “out of service” (abbreviation: “a D”).

The designations of the degrees are identical in the armed forces army and air force as well as other areas of the army such as the command support base or the army's logistics base .

All functions are open to female soldiers. They bear the degrees of their male comrades; that is, there are no terms such as "Wachtmeisterin" or "Hauptfrau".

In the Swiss militia system , the specialist officer (in short: Fachof ) is a member of the teams , the NCOs or the higher NCOs (except for professional NCOs and NCOs, who for legal reasons cannot achieve an officer grade even with the highest qualification), who is based on special knowledge and only if There is a need, based on Art. 104 of the Military Act, for an assignment or a permanent officer.

After the term “Fachoffizier”, the functional level (e.g. “Fachof (Hptm)”) is sometimes listed in brackets.

The General Staff Officer (Gst Of) can be both a militia and a professional officer. He is part of the corps of general staff officers and is used for special staff tasks alternating with years of command. General staff officers hold officer degrees between major and colonel with the addition i Gst for in the general staff (under certain circumstances, if, for example, the minimum number of years as a captain has not yet been reached, there is also Hptm i Gst). On the outside seam of the pants of the exit suit they wear a wide black strip of fabric .

In contrast to the rest of the staff officers, the general staff officers are all former company commanders and therefore have many years of leadership experience. You will go through additional training and take on higher commands as well as key functions in the staffs of large associations.

The Swiss Army has the following degrees:

Grade of the crew 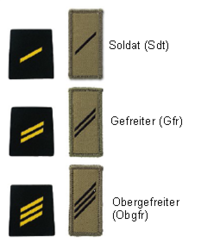 Private (Gfr; appointé , appuntato , appuntà )
In contrast to the Bundeswehr , it is not awarded automatically, but only on special events.
In foreign assignments he is referred to as a private or private E-2 (Pte). A few years ago, the name Lance Corporal (LCpl), derived from the British tradition, was still used.

Obergefreiter (Obgfr; appointé-chef , appuntato capo , primappuntà )
New degree since January 1, 2004. He serves as a deputy squad leader or junior officer during the internship. Continue as an officer candidate in the officers' school (OS) without experience as a group leader. When deployed abroad, it is referred to as Private First Class (PFC). With the further development of the army (WEA), the rank of corporal was abolished on January 1, 2019. 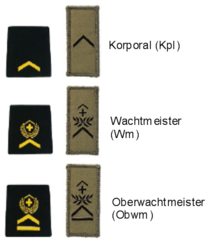 Badge of rank of NCOs

Note: Since the army reform 95 (starting suit 95), the badges of corporations, NCOs and higher NCOs are no longer sewn onto the uniform (see chevron (uniform) ), but integrated into the flap .

Corporal (compl; caporal , caporale , corporal )
Since January 1, 2004, specialist NCOs such as the Post or NBC NCOs have been promoted to corporal. Before that date, corporals were squad leaders. They are no longer undergoing leadership training and are no longer leading a group. When deployed abroad, he is referred to as a corporal (Cpl). (All group leaders with the grade of corporal were promoted to sergeant at their next service from 2004 onwards.)

Wachtmeister (Wm; sergent , sergente , sergent )
Until January 1, 2004 Deputy Platoon Leader; since January 1, 2004 new for group leaders or wagon commanders (for example gun leaders). During the internship, candidates for a higher non-commissioned officer such as Feldweibel and Fourier. In foreign missions he is referred to as a sergeant (Sgt).

Oberwachtmeister (Obwm; sergent-chief , sergente capo , caposergent )
New degree since January 1, 2004 for deputy train driver; Degree of the officer cadet during the internship in the recruit school. When deployed abroad, he is referred to as Sergeant First Class (SFC).

Feldweibel (Fw; sergent-major , sergente maggiore , primsergent )
Since January 1, 2004 only intended for technical field women. All unit field women with the degree of field women will be promoted to field women at their next service. On assignments abroad he is referred to as a Sergeant Major (SGM / Sgt Maj).

Fourier (Four; fourrier , furier , furier )
When deployed abroad, he is referred to as a Quartermaster Sergeant (QMS). Since January 1, 2004, a crossbar has been added to the Fourier's badge. This makes it clear that Fourier and Hauptfeldweibel are equivalent degrees in the hierarchy. 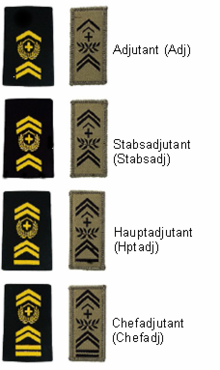 Adjutant Unteroffizier (Adj Uof; adjudant sous-officier , aiutante sottufficiale , adjutant sutuffizier ).
The Adj Uof can either be a professional sergeant or, in a militia role, a logistics sergeant (Log Uof), chief mechanic or accident train driver. As a professional sergeant, an instructor in a specific subject area. (e.g. Head of Sport, ...) On assignments abroad, he is referred to as Warrant Officer (WO).

Staff adjutant (staff adjutant; adjudant d'état-major , aiutante di stato maggiore , adjutant da stab )
As a career NCO normally the standard NCO, head of specialist training, head of the department or class teacher at the NCO school and the higher NCO course. In the militia deployment in the headquarters of a battalion, responsible for non-commissioned officers and at the same time ensign. On assignments abroad, he is referred to as a Staff Warrant Officer (bn) (SWO).

Badge of rank of subordinate officers

Leutnant (Lt; lieutenant , tenente , litinent )
The lieutenant is the lowest officer grade. In contrast to the "Army 95" period, a platoon leader is no longer automatically promoted after his practical service, but remains a lieutenant for two refresher courses or a maximum of 4 years. In foreign missions he is referred to as a Second Lieutenant (2Lt).

Oberleutnant (Oblt; premier-lieutenant , primotenente , primlitinent )
The first lieutenant is usually a platoon leader. The rank is "given" to the lieutenant after two refresher courses, provided that he has good qualifications. This gradation makes it possible (again) to assess the experience of a train driver.
He can also be a prospective company commander (captain) who is either in practical service or has not yet been promoted due to probation. In basic and specialist training, an Oblt temporary soldier is often used as a company commander. In foreign missions he is referred to as First Lieutenant (1Lt).

Captain (Hptm; capitaine , capitano , chapitani )
A captain often has the function of a company or a battery commander (artillery and anti-aircraft defense), but he can also be active in a staff.
As a career officer, often a standard career officer; Class teacher at an officers' school.
In foreign missions he is referred to as a captain (Capt).

Major (Maj or Maj i Gst; major , maggiore , maior )
In the headquarters of a battalion with various functions. (Deputy, S1-7). Can also be battalion commander under certain circumstances.
As a career officer, often a standard career officer; Class teacher at an officers' school or on the staff of the school. In militia function, division as a commander of a staff company or officer in the staff of a battalion or a large unit (Br or Ter Div)
In foreign missions he is referred to as a major (Maj).

Oberstleutnant (Oberstlt or Oberstlt i Gst; lieutenant-colonel , tenente colonello , litinent colonel )
Commander of a battalion. Officer on the staff of a large formation (Br or Ter Div). In foreign missions he is referred to as a Lieutenant Colonel (LTC / Lt Col).

Colonel (Colonel or Colonel i Gst; colonel , colonello , colonel )
Was formerly the regimental commander. Since the regiments with the Army XXI were abolished on January 1, 2004, he has led a battalion in rare cases. Mostly in the staff of large units (Br or Ter Div), deputy brigade commander.
As a career officer, usually the school commandant of a school. In foreign missions he is referred to as a Colonel (Col).

Higher staff officers (HSO) wear two black lampasses on the outside seam of their starting trousers .

Commander in Chief of the Army

In peacetime there is no commander in chief, but there is a chief of the army (CdA) with the rank of corps commander. Thomas Süssli has been the army chief since January 1, 2020 .

The army's degree badges are divided into

Since January 1, 2006, the metallic degree and function badges (mirror), as well as the name badges, have been replaced by cloth badges (Velcro), which correspond to NATO standards.

In the Swiss Army, the use of the colors of the armies ( weapon colors ) is common.