Grave at the Vienna Central Cemetery

Ludwig Anzengruber , pseudonym Ludwig Gruber (born November 29, 1839 in the Alservorstadt of Vienna ; † December 10, 1889 in Vienna) was an Austrian writer . He is considered an important playwright of the Austrian folk play in the tradition of Johann Nestroy and Ferdinand Raimund .

The Anzengruber family comes from Hofkirchen an der Trattnach in Upper Austria. Ludwig Anzengruber's father, Johann Anzengruber , left his father's court as a lad (Obermayerhof in Weng) and moved to Vienna, where he found a low-ranking civil servant in the gradient and domain court accounting. In 1838 he married Maria Herbich, the daughter of a pharmacy agent. The social affiliation of his parents played a recurring important role in Ludwig Anzengruber's later works.

Father Anzengruber wrote poems and plays in the manner of Friedrich Schiller , but without success. Only the drama Berthold Schwarz was performed. Ludwig was born in the Dreilauferhaus (today's address 9th, Kinderspitalgasse 1 / Alser Straße 38). When Johann Anzengruber died in 1844, Ludwig was only five years old. The mother left the father's small library to the son, in which the young man was particularly impressed by the works of William Shakespeare and Schiller. His mother, who became more and more the determining person in his life, had difficulties making ends meet with her small widow's pension of 166 guilders and 40 kreuzers. The guardian Andreas Schumacher found himself in financial difficulties and was also imprisoned for two years as a 1848 revolutionary in the Kufstein fortress . When Ludwig's grandmother died in 1854, the daughter and grandchildren had supported her with their savings, the living and living situation became even more precarious.

Nevertheless, the mother made it possible for her son to attend the elementary school of the Paulaner (1847-1850) and the lower secondary school of the Piarists (1851-1853). In 1855 he broke off his school career after the first grade of high school due to lack of means and took an internship (1856-1859) in the bookstore Sallmeyer. There he read more than he worked, so he had to quit the job after an argument with his manager. In addition to his education, he took acting lessons.

After suffering from severe typhoid fever , Ludwig Anzengruber decided to become an actor at the age of 19. Over the next ten years he traveled with his mother in various traveling groups as an extra and substitute actor through Austria, Croatia and Hungary , but he never made his breakthrough. One of the reasons may have been his strong dialect, which he could never quite shed.

From 1866 he lived in Vienna again. He had small engagements at the local Harmonietheater and the Varietétheater in Hietzing ; he also appeared as a folk singer. During this time several dramas and a few smaller stories were written, but they were unsuccessful. Anzengruber began to work as a casual writer, a. a. for the Viennese magazines Wanderer and Kikeriki . 1869 took Anzengruber due to extreme financial difficulties a job as a clerk in the Imperial Police Headquarters in Vienna and burned his early dramatic experiments.

Under the pseudonym Ludwig Gruber , he achieved his breakthrough in 1870 with the play Der Pfarrer von Kirchfeld , which premiered at the Theater an der Wien and made him famous overnight. Heinrich Laube , the director of the Burgtheater , wrote an enthusiastic review, Peter Rosegger sought the friendship of Anzengruber. The author, who became successful overnight, gave up his civil service career and from then on lived as a freelance writer.

Anzengruber's next plays The Perjury Farmer (1871) and Die Kreuzelschreiber (1872), with which Anzengruber succeeded in combining the current piece with the traditional folk theater comedy, were also very successful. His pieces were performed all over Europe. In 1873 Anzengruber married Adelinde Lipka (1857-1914), who was only 16 years old, against his mother's wishes. Repeated marital crises quickly arose, among other things. a. the couple's high debts and the very close relationship between Anzengruber and his mother, who, however, died in 1875, two years after the son's marriage. The marriage ended in divorce in 1889.

In 1874 Der G'wissenswurm , Anzengruber's most played comedy, was premiered. In the same year, the premiere of the socially critical tragedy Hand and Heart , which was written in high-level language so that it could be performed at the Burgtheater, was a failure. The tragedy The Fourth Commandment was even rejected in Vienna in 1877. Only after the sensational success of the play in Berlin in 1890 were there new productions in Vienna. 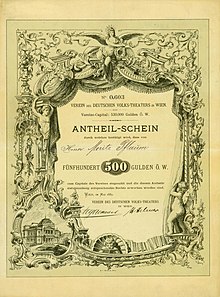 From 1879 the declining success of his plays and the tightened censorship regulations brought Anzengruber into financial difficulties. So he turned to prose and resumed journalism. In the following years he worked for various well-known newspapers and magazines. From April 1882 to May 1885 Anzengruber was in charge of the editing of the Wiener Familienblatt Die Heimat , from May 1884 he was editor of Figaro and from August 1888 he took over the editing of the Wiener Bote . In September 1888 he got a permanent position as a dramaturge for the German People's Theater in Vienna . Anzengruber is one of the founders of the “Deutsches Volks-Theater in Wien” association, as well as the furniture manufacturer Franz Thonet and the architects Hermann Helmer and Ferdinand Fellner . This association founded the German Volkstheater Vienna, which opened on September 14, 1889 with Anzengruber's Der Fleck auf der Ehr .

At the end of November 1889, the 50-year-old playwright fell ill with anthrax . After a fortnight he died of complications from blood poisoning . He was buried in an honorary grave in the Vienna Central Cemetery . In Vienna- Margareten (5th district) the Anzengrubergasse is named after him, in Vienna- Penzing (14th district) the Anzengruberstraße , also in Linz , Wels , Innsbruck , Villach , Klagenfurt , and in Germany in Hamburg-Wilstorf , Berlin- Neukölln , Erlangen-Dechsendorf and Passau .

Anzengruber's work can be attributed to the outgoing realism . He designed a village world that had retained its natural immediacy, thus completing the Austrian folk piece in the tradition of Johann Nestroy and Ferdinand Raimund . Like his role model, Nestroy's competitor Friedrich Kaiser , Anzengruber also tried to write serious, cheerful folk plays with sentimental and socially critical elements at the same time.

Anzengruber saw himself as a popular enlightener and social reformer, liberal and anti-clerical ; In his pieces he concentrated on the representation of social relationships in a manageable environment and tried, within the framework of traditional dramaturgy, to make current social and political problems clear. He deepened the character drawing psychologically and stylized milieu and dialect. He proceeded similarly with the history of the village . His approach was enlightening , he wanted to de-divine and humanize the world . Some of his late prose texts can already be classified as naturalism .

In his time, Anzengruber was highly valued by Theodor Fontane , Otto Brahm , Paul Heyse and Friedrich Engels . When Ödön von Horváth wrote new critical folk plays, the work of Anzengruber faded into the background. Today Anzengruber's work is recognized as a democratic alternative to the local literature of the time. Otto Brahm called Anzengruber an angry moral judge, a real punisher who visualized the ruin of Old Vienna and the brutalization of New Vienna with equally harsh truth and who remained eternally hostile to all theatrical whitewashing and varnishing with honey colors.

The Austrian labor movement saw Anzengruber as one of the most important folk poets alongside Peter Rosegger and Marie von Ebner-Eschenbach because of the socially critical tendency of his pieces . After his death, Victor Adler wrote in an obituary in the Arbeiter-Zeitung :

Today the greatest dramatic poet of our day is buried in Vienna. [...] We are far from proclaiming him a socialist. The economic problem was far from him. But he felt the cutting contradictions in our society and with the naive love of truth of the real poet he expressed what he saw and felt. In each of his pieces there is a man who expresses the contradiction, who is not like the others, but who thinks and loves people. […] They have all perished in and on society and they know that. These rags […], through which the whole honest, honorable civil and peasant society and its full virtue actually get a damned shabby appearance, they speak Language of truth. And that makes the poet uncomfortable. Anzengruber was a rebel by nature.

The Anzengruber Monument by Hans Scherpe on Schmerlingplatz (unveiled in 1905)