Marie Freifrau Ebner von Eschenbach (born September 13, 1830 at Zdislawitz Castle near Kremsier in Moravia as Marie Dubský von Třebomyslice ; † March 12, 1916 in Vienna ) was a Moravian - Austrian writer . With her psychological stories she is one of the most important German-speaking storytellers of the 19th century .

Marie von Ebner-Eschenbach, née Freiin Dubský, countess from 1843, was the daughter of Franz Baron Dubský, from 1843 Count Dubský, and his second wife Baroness Marie von Vockel. On her father's side, it has its roots in the old Bohemian-Catholic noble family of the Dubský of Třebomyslice . On her mother's side, she descends from the Saxon-Protestant family Vockel. She had six siblings, including the Austro-Hungarian general and diplomat Viktor Dubský von Třebomyslice .

Shortly after she was born, her mother died. She lost her first stepmother, Eugénie von Bartenstein, when she was seven years old. Three years later, Marie's father was their fourth marriage to Countess Xaverine Kolowrat-Krakowsky , an educated woman. This recognized and promoted the literary talent of her stepdaughter. While the family lived in Vienna for several months each year, Xaverine often took her stepdaughter to the Burgtheater and gave her literary suggestions.

At the age of eleven, Marie was given the task of classifying her late grandmother's books in the library in Zdislawitz. The author Moritz Necker describes it as follows: She read according to her choice, without guidance or interference, and her free spirit and independence from all metaphysics developed.

Marie spent the summer months with her family at the castle in Zdislawitz, and in winter she lived in Vienna. Many different people took care of Mary's upbringing: her grandmother on her mother's side, her aunt Helen on her father's side, Czech servants and German and French governesses . As a result, she was lucky enough to be able to learn different languages: German , French and Czech , with French becoming her mother tongue .

According to Necker, Ebner-Eschenbach, as a noble woman, benefited from the fact that she lived above the bourgeoisie, was able to oversee them and was given a broad view of state conditions early on. With the description of the aristocracy she was familiar with, she opened up a new poetic field as a poet, in which she also found many imitators. 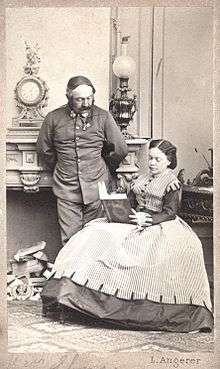 Marie von Ebner-Eschenbach with her husband, around 1865

In 1848, at the age of eighteen, Marie married her cousin Moritz von Ebner-Eschenbach , the son of her aunt Helen. She moved to Klosterbruck (Czech: Louka ) near Znojmo in South Moravia to live with her husband, who was fifteen years her senior . Her husband was an educated man himself and supported Marie in her urge to write. Moritz von Ebner-Eschenbach taught physics and chemistry as a professor at the Engineering Academy in Vienna, later the academy was moved to the Znojmo location and renamed the Genie Academy. He retired as a Lieutenant Field Marshal . The marriage of the two remained childless.

In 1856 she moved permanently to Vienna, where she trained as a watchmaker in 1879 , which was unusual for a woman at the time. She collected form clocks ; the collection is in the watch museum in Vienna. In the course of time she turned entirely to literature. During almost twenty years she wrote dramas (Society plays and comedies ), inspired by Friedrich von Schiller , but they were not successful. After she had worked as a playwright with little success , she was able to attract attention in 1876 with her first short novel Božena, which was printed in the Deutsche Rundschau . She now tried her hand at writing, which turned out to be a good decision due to the success. With works such as the Aphorisms (1880) and the village and castle stories , she finally made her breakthrough. The latter contain their most famous novella, Krambambuli . She now focused on her narrative poetry, in which one finds important elements of her social thinking and political awareness.

After she published her story Lotti the Watchmaker in 1880 , she was also welcomed by publishers. In 1887 her novel Das Gemeindekind was published . In the opinion of Moritz Necker, she had fought against established ideas of her time all her life. She did not write to finance family support, but rather with the inspiration and conviction that her writings could change the thoughts of her time. Their intention was to convey morality and humanism . Marie von Ebner-Eschenbach belonged to the Austrian "Association for the Defense of Anti-Semitism " founded by Arthur Gundaccar von Suttner in 1891 . Nonetheless, she did not avoid using typical anti-Semitic clichés and stereotypes such as physiognomy , 'dirty' business, and materialistic thinking when describing Jewish characters in her works. However, the interpretation of the character descriptions in question is controversial.

From 1890 Marie von Ebner-Eschenbach found her dramatic writing style with her dialogical novellas. With her works Without Love (1888) and At the End (1895) she achieved success on the Free Stage in Berlin . In 1898 she was awarded the highest civil order in Austria , the Cross of Honor for Art and Literature . In 1900 she received the first female honorary doctorate from the University of Vienna . Her husband died in 1898. In the same year, the Drei-Raben-Haus in Vienna (between Rabensteig 1 and Rotenturmstraße 21) was demolished in the course of road regulation, and Ebner-Eschenbach moved to Zdislawitz. After 1899 she made several trips to Italy and in 1906 published her memoirs Meine Kinderjahre . 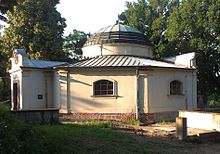 The family grave in Zdislavice

Marie von Ebner-Eschenbach died on March 12, 1916 at the age of 85 in her apartment in Vienna, Spiegelgasse 1, and was buried in the family crypt of Count Dubský in Zdislawitz . Zdislawitz Castle was left to decay for a long time, the mausoleum was neglected and there was no memory of the poet. The crypt and the adjoining park have been renovated by the Czech National Trust since 2015 and the grave and chapel were made accessible in June 2016 (on the occasion of the 100th anniversary of her death). The work to renovate the facility and erect a monument should be completed by 2020.

In her honor, a memorial plaque was installed at the Vienna University in Vienna and the Ebner-Eschenbach-Park in Vienna- Währing was named. Part of the estate is now in Lysice Castle , where a permanent exhibition is dedicated to her. The Austrian Post published a special postage stamp on the 50th (1966) and 75th (1991) anniversary of her death, the German Post on the occasion of her 150th birthday (1980). The portrait of Ebner-Eschenbach was also intended to show the obverse of the 5000 Schilling banknote from the 1997 series , of which only the 500 and 1000 Schilling notes were issued.

Along with Anette von Droste-Hülshoff, Ebner-Eschenbach is one of the most important German-speaking women writers of the 19th century. However, a more critical view of her work has established itself, which is interpreted as conservative and harmonizing. Daniela Strigl sums up the author's assessment as follows: "What was the object of worship a good hundred years ago has become an obstacle to reception."