Teufe is the mining term for the depth. The depth ( h T ) indicates how deep a point underground lies below the surface of the day (the surface of the earth around the pit ). In contrast, the height h denotes the distance measured upwards from a reference surface . The vertical distance between the ground surface and a point in the mine , that is, the vertical depth was formerly referred to as Seiger designated depth. This distinction is no longer made today, depths and sea depths are synonymous.

Today the reference area normal height zero (NHN; formerly normal zero NN) is mainly chosen in mining in Germany . This means that there are negative and positive heights. Height indications are not depth indications. If a point is below NHN, it receives the sign - (minus) , if it is above, + (plus). The NHN-height has the symbols H .

In early mining, the mining right granted was limited to a certain depth due to the tunnel construction. This meant for the individual lugs owner that it between ridges and sole state some Seigermaß. He could deposit up to eternal fully exploit. This term was derived from the assumption that a field author will last forever in front of him and in the whole of the mountains. It was assumed that the mountains formed the border and that the eternal entirety had been reached at the latest when one could penetrate another tunnel. If already enfeebled fields bordered on your own field, you could build up to the border of an already enfeebled field. With the advent of civil engineering, but also with the award of square fields , this regulation was no longer feasible. By introducing the crossing , the regulation was changed so that the award now took place down to the eternal depths . The eternal depth is the infinite depth below. Through the eternal depth a mine owner is with the award granted the right to a trending dismantle the traps mining claim within its field limits the deposit to as deep as he can or as the deposit at depth ranges. 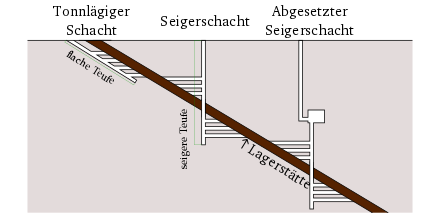 In addition to the Seiger depth, there is also the shallow depth. The shallow depth is the distance that exists between two points lying one below the other when they are on a flat inclined plane .

During the tunnel mining there were also the heir depths . This was the depth that a tunnel had to be in order for it to be granted hereditary tunnel justice . The Enterbungsteufe was - depending on the mining area - a particular seigeres level below the Erbstollensohle. If another tunnel was created, which reached the level of disinheritance, the justice of the tunnel was withdrawn from the first tunnel.

In ore mining, there was the so-called Erzteufe . This was the depth at which a deposit - in the experience of the miners - contained most of the ore . The miners had found out that thick deposits usually had a larger ore depth than narrow ore veins . Both above and below the ore depths, the deposit was not as rich. If you got deeper than the ore depth, the miner said: "The right ore depth is already over-sunken".