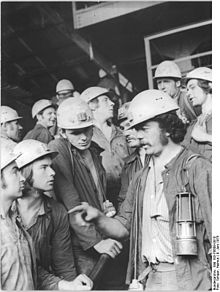 The miner's language is a professional group-specific technical language ( sociolect ) in mining . It is characterized by the creation and development of independent or modified terms . In addition to many technical terms, crude words from everyday language have also found acceptance. The miner's language is one of the oldest technical languages; Expressions are documented as early as the 13th century. The language has grown over centuries and thus often retains old word forms and meanings that have already died out or are superseded in modern language, as linguistic comparisons show.

The first glossaries of the miner's language can be found at the beginning of the 16th century. Already in the second edition of Ulrich Rülein von Calw's Bergbüchlein from 1518 there is an eight-page appendix on "Bercknames, the approaching miners vastly useful", which explains the differences between mining and general language expressions. Georgius Agricola's writings are of particular importance, and his 1528 treatise “Bermannus, sive de re metallica dialogus” (“Conversation on the Mining System”) contains, among other things, a list of 76 specialist terms. His "De re metallica libri XII" ("XII books on mining and metallurgy") (1566), published after his death, contain an extensive glossary of mining terms and idioms. From the 17th century, real dictionaries of the miner's language were published, such as the well-known "Pickled Gräublein Ertz" by G. Junghans (1680). In the mid-19th century, the vocabulary of the miner's language probably comprised over 10,000 words.

Since German mining was considered to be a world leader in mining technology, especially in the 18th century, German mining terms spread as loan words in other languages, e.g. B. into Russian . Alexander von Humboldt wrote his geological records, contrary to his other habits, always in German using the miner's language in order to be able to express himself as precisely as possible.

Ridge protection in the Glasebach pit

Ass leather: miner who runs in on the leather (after Georg Agricola) 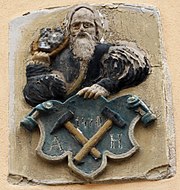 Miner with shouldered ore trough. Relief on the house at Fischerstraße 7 in Freiberg

Operator station of a hoisting machine

Driving over in the Freiberg pit "Reiche Zeche"

Filling point of the Glasebach pit 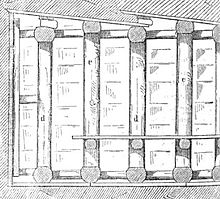 Lawn hanging bench of the "Reichen Zeche" in Freiberg

On site in a seam that is very thin

Orifice of a historic colliery

Mouth hole of a ramp (Brunndöbra)

Falling platform in the Mansfeld copper slate mine 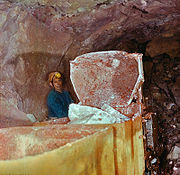