The title of this article is ambiguous. For further meanings see Seiger (disambiguation) . For the Austrian financial analyst, see Johann A. Saiger .

The adjective seiger (or saiger ) [ ˈzaɪ̯.ɡɐ ] is a term used in mining and geology mostly synonymous for vertical , perpendicular or vertical , which is used to describe the spatial location of mining or geological conditions in more detail. For example, in mining a vertical shaft is called a Seigerer shaft , in geology the vertical position of a cleft is called a Seigerer cleft . In contrast, a barrel-length shaft deviates from the vertical and leads down at an angle. Accordingly, a Seigerriss is a vertical sectional drawing ( elevation ) through a mine. 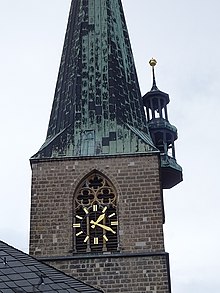 Saiger tower on St. Nikolai (Quedlinburg) with the striking mechanism for the tower clock

Ground plan and seiger plans of a mining industry

The usual names in mining for slopes from vertical to horizontal are:

In some areas in Central Germany, the clock is also known colloquially as Seiger or Saiger. This designation, which was originally used for tower clocks, goes back to the early New High German word seiger for balance and is derived from the horizontally swinging balance bar of these clocks.