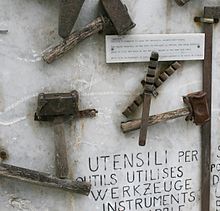 Marmorfäustel and metal pieces from Carrara

Play media file
Video: Gunter Demnig divides a paving stone with a chisel and a hammer while laying a stumbling block in Cologne

The sledge is a - (mostly) by Steinmetz used - Identification of the hammer , a hand tool of iron or steel with a weight of 1.0 kg to 1.5. It is used and used in a variety of ways as a striking tool. The impact surface / track of the Fäustel is hardened and has two mostly square tracks . The term “Fäustel” can be derived from the shape of the clenched hand.

The hand-held chisels , called iron by the stonemason and stone sculptor , are driven with the hammer.

A special feature is the stonemason's bossing hammer , which weighs two or more kilograms. This hammer is used (in the past mainly in the quarry) to work off large bosses (overhangs on stone surfaces) in the quarry. Embossing hammers strike on embossing tools. These are somewhat more stable and larger point irons (see above).

A special form of a stonemason's mallet came from Carrara . The track is not hardened and the Fäustel was worn out. Pieces of metal were forged into the track depending on the wear and tear. With this special method, the marble surface was not severely damaged (bruised).

With the stonemason's fists and chisels, the stone is formatted, its surface shaped or large pieces of stone are cut off.

In addition, the stonemasons use a so-called writing hammer , the weight of which is 0.5 to 0.75 kg. The hammer is used to hammer the letters into stone.

The term “Fäustel” has meanwhile also established itself in other trades. The hammer is described in DIN 6475 .

Large two-handed hammers are also called hammers if they have two lanes. The Sledgehammer and the flatter the masons mind (one track and one or two narrow tracks Tiller called).