Gunter Demnig (born October 27, 1947 in Berlin ) is a German artist . He became known for the stumbling blocks that he has been laying in memory of victims from the time of National Socialism since 1996 .

Demnig grew up in Nauen and Berlin . In 1967 he graduated from high school and began studying art education at the University of Fine Arts in Berlin with Herbert Kaufmann . 1969/70 followed a year of industrial design studies at the same university. From 1971 he continued his art education studies at the Art Academy in Kassel and passed the first state examination there in 1974.

In 1985 Demnig opened his own studio in Cologne and worked on several projects, such as the Moltkerei workshop and the Fuhrwerkswaage art space. Since 1994 he has also worked at the IGNIS cultural center.

Since April 2011 Demnig's studio in Frechen has been in the Signalwerk art center , which is located on the site of the former train station of the Cologne-Frechen-Benzelrath railway . About 20 other well-known artists in the region also operate their studios there. In 2017 he moved his studio to Elbenrod in Hesse .

Demnig became known for producing or laying the so-called “ stumbling blocks ”. They are intended to remember people who were deported during the Nazi era and mostly fell victim to the Holocaust . The stones, with small brass plates with the names of the victims on the top, are laid in the pavement or sidewalk in front of their former homes. The project, started in 1996, has been the largest decentralized memorial in the world for years with 75,000 stones in 1265 German municipalities and in 24 European countries .

The Remembrance Stones project, based on the Stolpersteine, aims to promote the memory of victims of Franquism . The memorial stones, which are also 10 × 10 × 10 cm in size, have a silver surface made of stainless steel. The first Remembrance Stones were laid on the island of Mallorca in mid-December 2018 . 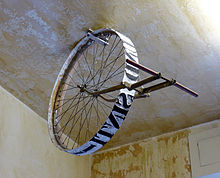 Text tracking device from 1990 "... a trace through oblivion"