This article covers the Italian city. For individuals with this name, see Carrara (disambiguation) .

Carrara is known for its white marble , the Carrara marble , which is quarried in the nearby quarries , as well as for its sculpture academy , the Accademia di Belle Arti di Carrara .

Location of Carrara in the province of Massa-Carrara

Carrara is located in the Apuan Alps in the southern part of the Massa-Carrara province. The city is located on the Tyrrhenian Sea ( Marina di Carrara ) approx. 100 kilometers northwest of the regional capital Florence , approx. 6 km northwest of Massa in the climatic classification of Italian communities in zone D, 1 601 GG. To the west, Carrara borders the province of La Spezia , which belongs to the Liguria region.

The region around Carrara is an old settlement area and based on archaeological finds it can be assumed that it was settled in the Paleolithic . From around 2500 BC It is known that the inhabitants of the Apuan area began to bury their dead in grottoes, and around 1000 BC. In the late Bronze Age , agriculture and animal husbandry were predominant. The inhabitants lived in sheltered locations in hut villages and were called Castallari according to oral tradition . In the 7th to 6th centuries BC The area was more heavily populated and the Celts invading the area also changed the prevailing cultural influence in the Iron Age .

The first evidence of marble work is in the Museo Nazionale in Luna from the 2nd century BC. At a base for the statue of Claudius Marcellus . This Roman consul had 155 BC The Ligurian Apuans finally defeated. To the northeast of today's city of Carrara was Luna, a Roman colony founded in 177 BC. BC and which is today near the place Luni Mare, a district of the municipality Luni in the province of La Spezia . Due to the nearby quarries , the city of Luna gained great economic importance, and only after the final silting of the port on the Magra River , after armed attacks and the spread of malaria , Luna, which was raised to the bishopric, was largely abandoned in the 11th century.

History from the Middle Ages to the 19th century

Marble transport in the 19th century

It was not until around 1000 that farmers founded the hamlet of Cararia , the forerunner of today's city of Carrara, and around 1250, it is believed, the reopening of the quarries for the construction of the parish of Carrara could have taken place, as marble was required for this. From 1185 to 1313 the prince-bishop of Luna ruled Carrara and from 1313 to 1493 the community of Carrara ruled . The first evidence for the use of the sculptural material Statuario from Carrara is a Genoese commission from the year 1265. Carrara was administered as a free municipality in the 13th century, possibly even before this time, and there are said to be up to 400 free inhabitants at that time and found no addicts there who would weaken the power of the bishop.

The builders and stonemasons visited Carrara for the construction of the Cathedral of Pisa , and at the beginning of the 15th century the sculptor Maffiolo da Como, a Lombard stonemason who lived in Genoa, came to Carrara and worked there while the blocks were previously being worked Location on the respective construction site. In the middle of the 15th century, the Carraras stonemasons formed a cooperation for the first time. In 1473 the Margrave Giacomo Malaspina of Massa took over the power in Carrara, which had previously exercised various nobles .

Alberico II, Prince of Massa and Margrave of Carrara, combined Carrara with Massa from 1664 as the Duchy of Massa and Carrara , which in 1859 finally became part of the Kingdom of Italy . In the unification efforts in Italy, the workers and the liberal citizens of Carrara sided with the Republicans . After the unification of Italy, marble production increased and the number of stone workers doubled to 10,000. However, exports were hampered by the American Civil War and high protective tariffs in Europe.

In the 19th century Carrara was the center of stone processing and the place prospered; numerous technical inventions were made. For example, in 1815 the worker Giuseppe Perugi invented the stone saw with several saw blades, the first frame saw for natural stone, which was driven by high-speed water wheels. In 1895 the industrialist Adolfo Corsi first used the wire saw "with a spiral wire rope that was driven by a diesel engine according to the Belgian model".

History from the 20th century

The beginning of the First World War had a fatal economic impact on Carrara, as it brought marble production to a standstill. The Great Depression of the 1930s then cut production, which was slowly starting up again, by half. Mussolini's fascist government tried to cope with the consequences of the Abyssinian War and the resulting drop in sales of Carrara marble by awarding monumental orders such as the construction of the Mussolini Forum (today Foro Italico ) with the Mussolini Obelisk in Rome . Such monumental orders, however, hardly changed the economic situation of Carrara.

During the time of Italian fascism , Carrara was combined with the cities of Massa and Montignoso to form the municipality of Apuania in 1938 . This community was dissolved again in 1946. The Second World War not only brought marble production to a standstill; In the fight against partisans in 1944/45, the German Wehrmacht also largely destroyed the facilities in the quarries. The defense line of the Wehrmacht, the so-called Gothic position , ran between Massa and Carrara . In the small suburb of Carrara Bergiola Foscalina , the Waffen-SS and Black Brigades carried out the Bergiola Foscalina massacre, killing 71. Not far from Carrara, the Fivizzano massacre took place with around 400 murdered people, as did the Sant'Anna di Stazzema massacre with more than 500 murdered people. A large part of the population, the workforce and above all women were involved in the bitter resistance against the German occupiers, who prevented the entire civilian population from being evacuated from the urban area of ​​Carrara through the women's uprising in Carrara . Here played anarcho-syndicalists , who were well represented at the end of the 19th century in Carrara among the quarry workers and one of the world centers of Carrara anarchism had made a major role. That Carrara was and still is an anarchist stronghold can be seen from the numerous memorial plaques and memorials for anarchists and from the fact that the International of Anarchist Federations was founded in the city in 1968 .

Carrara and the marble quarries. In the foreground a stone processing company

As a result of the reconstruction after the end of the war and the European construction boom in the 1960s, the production volume of the quarries rose to 500,000 tons, and Carrara's economic situation improved.

Between 2014 and 2015, a total of six workers died in the marble quarries, which is why the working conditions are criticized. In April 2016, a 2,000-ton rock slide occurred, possibly triggered by mining work, in which two workers were buried and died.

The city of Carrara lies west of the Apuan Alps, on the foothills of which part of the city rises.

The historical center is the Piazza Alberica, where numerous rallies of the political forces of Carrara took place, another large square is the Piazza Farini, today Piazza Matteotti, with classicist buildings from the 18th century.

In Carrara is the Cathedral of Sant'Andrea Apostolo (also called Cattedrale di Sant'Andrea or Cathedral of Carrara ), which was built between the 12th and 15th centuries with Lombard and Tuscan style influences. With the exception of the ornamented components, all the building blocks were carved from Carrara marble .

Other important churches in the center are the Chiesa di San Francesco (built in the 17th century) and the Chiesa del Carmine (16th century, contains a sculpture by Bartolomé Ordóñez ).

The Casa Repetti is located on Via Santa Maria. It is a stone house made of Carrara marble, built with three floors and three rows of windows with columns in Genoese style from the end of the 13th and beginning of the 14th century. There are geometric reliefs of animals and plants on various building blocks of the facade. Petrarca is said to have lived in Casa Repetti and it was the first city hall in Carrara. The historian and scientist Emanuele Repetti lived here in the late 18th century.

The Accademia di Belle Arti in Carrara includes the castle and the palace of Cybo . The fort was built in the 13th century. It was not only used for military purposes, but also as the residence of the prince-bishops. It was destroyed and restored by an earthquake in 1920. The academy now houses a library, lecture rooms, plaster models and original sculptures for students to study in art.

At the corner of Via Verdi is a marble building from the early 1930s, the former seat of the Gioventù Italiana del Littorio ("Italian Youth of Littorio"), which was converted into a school after the end of Italian fascism.

In the city of Carrara marble there are numerous sculptures that represent images from the past of Italy, such as statues of Garibaldi and Giuseppe Mazzini and the monument dedicated to the anarchist Alberto Meschi, but also numerous modern art objects.

In addition to the academy, there is a training center for stonemasons and artisan stone sculptors , the only one financed by the Italian state and not by the Italian province. There is also a museum that deals with the extraction of Carrara marble. Stone sculptors from all over the world work in numerous small studios on the streets of the city, and there are numerous stone industry companies on the outskirts of the city that not only process Carrara marble, but also natural stones from all over the world.

Also worth seeing is the Carrara cemetery, where there are numerous tombs that tell of the fate of the quarry workers. The lorries that used to be indispensable in the streets of Carrara, which transported raw blocks from the mountains to the stone processing companies in Carrara and Massa , are no longer allowed to drive through the city center.

It is noticeable that in Carrara marble is also used as a material for everyday use, for example for curbs, benches or plant containers.

Numerous famous international sculptors such as Henry Moore , Jean Arp and Italian such as Giuliano Vangi , Arturo Martini and Arturo Dazzi have worked in Carrara . 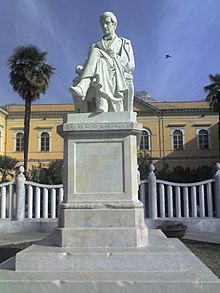 Monument to Pellegrino Rossi , erected in 1876, by Pietro Tenerani in 1854

Municipalities in the province of Massa-Carrara in the Tuscany region