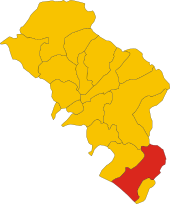 Location of the municipality in the province of Massa-Carrara

Massa is about 115 km west of Florence and extends from the Ligurian coast to the Apuan Alps . The highest point of the municipality is the Monte Tambura with 1890 m above sea level. About half of the municipal area lies in the coastal plain, the other half is formed by hills and mountains. Massa is the seat of the Roman Catholic diocese of Massa Carrara-Pontremoli and is located on the Via Francigena , the old pilgrimage route from England to Rome.

At the time of Italian fascism , Massa was combined with the cities of Carrara and Montignoso to form the municipality of Apuania in 1938 . The community was dissolved again in 1946, since then Massa has been independent again.

The old town of Massa is about two and a half kilometers from the coast on the Frigido River, which flows into the Tyrrhenian Sea at the seaside resort of Marina di Massa .

The historic Massa includes the upper town center, dominated by the castle, and the lower town with the cathedral , which was built in the 16th century and dates back to a church from 1389. The center is lined with orange trees Piazza degli Aranci . On the south side of the square is the Palazzo Cybo-Malaspina (or Palazzo Ducale ) with a facade accentuated in red and white in Baroque style, which is why it is also called Palazzo Rosso . The imposing building bears witness to the former rule of the Malaspina family from the Cinquecento and is now the seat of the government of the province of Massa-Carrara .

The National Esperanto Library of Italy was founded in 1972. It has been publicly available since 1994.

Massa, along with the Carrara region, is the main square for Tuscan marble quarrying .

The narrow plain between the Apuan Alps and the Mediterranean has always been an important traffic route on the Italian west coast. The Roman Via Aurelia , today's State Road 1, ran here . The Pisa – Genoa railway line was built in the 19th century . The A12 motorway also runs through Massa. Nearby is the Massa-Cinquale airfield for general aviation .

Bad Kissingen and Vernon also have a partnership with each other.

Municipalities in the province of Massa-Carrara in the Tuscany region