Viterbo is a city in central Italy . It is the seat of the administration of the province of Viterbo in the Lazio region as well as the seat of a Roman Catholic diocese and the University of Tuscia .

Name and coat of arms

The Etruscan name of the city, Surrena, or Umgebung, is uncertain. The Romans called the city Castrum Herculis . The current name, first mentioned in the 8th century as Castrum Biterbi , may derive from the Latin Vetus Urbs (old city).

The coat of arms of Viterbo shows a blue shield with a palm tree, in front of it a striding, golden lion with a golden crown and flag with a silver cross on a red background, topped with four silver keys. The flagpole is crowned with a double-headed eagle . The oldest part of the coat of arms is the Guelfan lion. The standard with the eagle was awarded to the city by Friedrich Barbarossa . The palm tree was taken over by the destroyed neighboring town of Ferentium . The banner was Viterbo by Clement III. awarded as thanks for the release of two cardinals from captivity by the Aldobrandini.

Viterbo is 77 km north of Rome and 211 km southeast of Florence . It is located in the Tuscan hills at the foot of the Monti Cimini between Lake Bolsena and Lake Vico . The municipality extends over a height of 86  m slm to 896  m slm

Viterbo is connected to the A1 Autostrada del Sole via the Superstrada SS 675 , Orte exit. From south to north it is crossed by the state road SS 2 Via Cassia , which runs from Rome via Siena to Florence. The city has three train stations. The railway to Orte starts at Porta Fiorentina station, the FL3 line from Rome Ostiense via Bracciano and at Viterbo Met.Ro ends at Porta Romana station. the Roma Flaminio – Viterbo railway , operated by ATAC , ends . There are further stops in the districts of Bagnaia and Grotte Santo Stefano.

Viterbo military airfield is located three kilometers northwest of the city center, on the road to Tuscania . With the decision of the Ministry of Transport in November 2007, plans were made to expand this airport into Rome's third commercial airport . Above all, it should accommodate low-cost traffic . The poor accessibility of Rome was criticized in this decision. On January 29, 2013 the planning of this project was finally finished.

Etruscan wall finds in the area of ​​the cathedral, as well as the find of the Bucchero chicken , prove the pre-Roman settlement. 310 BC The place was conquered by the Romans and soon gained importance thanks to its location on the Via Cassia .

Viterbo came to the Pope in 754/756 through the Pippin donation . In 773 Desiderius expanded the place into a border fortress of the Longobards . 852 is Castrum Viterbii as part of the church state mentioned. In 1092 the first city wall was built, which was expanded in 1187, 1215 and 1268. Viterbo became an independent commune at the end of the 11th century and was contested between the Holy Roman Empire and the papacy for three centuries . In 1167 Viterbo was granted city rights by Friedrich Barbarossa . A palace was built for this emperor in the city in 1169. With the conquest and destruction of rival Ferentium in 1172, Viterbo expanded its power as a free commune. In 1192 it became a bishopric .

Palazzo dei Papi di Viterbo , Palace of the Popes from the 13th century, now the residence of the Bishop of Viterbo

Several councils were held in the city and at times it was also the papal residence; therefore it is also called the "City of the Popes ". From 1257 to 1281 a total of eight popes resided in Viterbo almost without interruption. The offer of the commune to build a palace as a curia seat for the popes contributed to this. This building was built in sections from 1255 to 1266 and was given the name "Palace of the Popes" due to its use; today it is the bishop's palace.

The longest conclave to date took place in Viterbo . In 1268 , after the death of Pope Clement IV , the conclave began, which lasted a total of 1005 days (from November 30, 1268 to September 1, 1271). The number of cardinals was 20 at the beginning and only 16 at the end, as 3 cardinals died during this time and one left the conclave. On the advice of Bonaventure , the cardinals were finally locked up with bread and water until a new Pope was elected. On September 1, 1271, a non-cardinal was elected as the new Pope. The chosen one, Tebaldo Visconti, an Italian from Piacenza , not even a priest , was on a pilgrimage in the Holy Land ( Acre ) at the time. Visconti, then Archdeacon of Liège , arrived in Viterbo on February 10, 1272, accepted the election, was ordained priests and bishops on March 19, 1272 and was crowned Pope Gregory X on March 27, 1272 in Rome .

In the 14th century Viterbo came under the rule of Gatti and De Vico and stood in bitter contrast to Rome. In 1354 these noble families were robbed of the city by Cardinal Albornoz of the Signoria , but they regained them after his departure and maintained them until the murder of Francesco di Vico (1387). Viterbo definitely came under papal suzerainty in 1396, and an attempt by Giacomo de Vico to restore his family's rule over the city in 1435 failed. Viterbo, which was the seat of the papal rector of the patrimony, remained an integral part and a delegation of the papal state and shared its fate. In 1871 Viterbo became part of the Kingdom of Italy and in 1927 the capital of the province of the same name. After severe destruction in World War II , Viterbo was one of the first fully rebuilt Italian cities.

The following parts of this section seem since 2018 is out of date to be : local elections: Mayor
Please help with to the missing information research and insert .

Leonardo Michelini (independent) was in the runoff election on 9/10. Elected Mayor June 2013. He defeated his predecessor Giulio Marini ( PdL ) with 62.86%. Michelini's center-left coalition also has the majority in the local council with 20 out of 32 seats.

Marini was elected mayor in April 2008. Marini was also elected to the Italian Chamber of Deputies in April 2008 , to which he was a member until 2012. 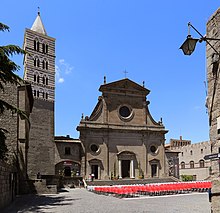 The historic old town of Viterbo is considered to be one of the best preserved medieval cities in central Italy. Numerous palaces are still preserved from the Middle Ages , such as B. the Palazzo dei Papi (13th century) in the Piazza San Lorenzo and the Palazzo dei Priori (begun in the 13th century) in the Piazza del Plebiscito. The Palazzo Comunale (from 1460), the Palazzo del Podestà (1264) and the Palazzo della Prefettura (in its current form from 1771) are also located there. The fountain inside the city walls on Piazza della Rocca in the center of Viterbo also dates from the Middle Ages and is one of the city's oldest sights. The original fountain was restored in the 15th century. After that, the architect Giacomo (also Jacopo) Barozzi da Vignola enlarged the old fountain in the 16th century and created an octagonal fountain shape, which to this day has two outer basins between four ascending stairs and three further stepped round basins above this fountain base.

The Romanesque cathedral of San Lorenzo was built over a temple of Hercules. It was modified in the 16th century and suffered severe damage from Allied bombers during World War II . The Gothic tower dates from the 14th century and shows influences from artists from Siena .

The Franciscan Church of San Francesco houses the famous papal tombs of Pope Clement IV and Hadrian V. In San Lorenzo lies John XXI. buried, but the tomb is not as significant as the other two.

The Etruscan necropolis Castel d'Asso lies west of the city, the excavations of Ferentium 9 km north of the city. The necropolis of Norchia is about 15 km southwest.

The pilgrimage church of Santa Maria della Quercia, built from 1470 onwards, is located northeast of the city center. It contains an altar structure created by Andrea Bregno .

Every year on September 3rd there is a nationally known procession in honor of St. Rosa of Viterbo . On this occasion, the Macchina di Santa Rosa , a 30-meter high and five-tonne ceremonial tower is carried through the city by more than 100 girders.

Viterbo is home to important military facilities, including the most important base for the Italian army aviators and schools for the army and air force for prospective officers (Maresciallo) , which are trained in collaboration with the local university.