Montefiascone is a town with 13,187 inhabitants (as of December 31, 2019) in the province of Viterbo in the Italian region of Lazio . She is a Roman Catholic titular bishopric .

The name Montefiascone is probably derived from the Latin Mons Faliscorum , mountain of the Falisker . Aspects of the origin of the name can be found in the two variants of the city arms: The shape from 1953/1954 shows a Roman bundle of rods on the Sechsberg, the fasces , as a derivative interpretation of the second part of the name, the newer version, on the other hand, shows a wine barrel above, which is an allusion the wine production and the Italian term fiasco for barrel is to be interpreted. The discussion about the correct view is still ongoing.

Montefiascone is 94 km northwest of Rome , 127 km southeast of Siena and 17 km north of Viterbo . The community is located in the volcanic Monti Volsini on the south-eastern shore of Lake Bolsena . The old town occupies one of the highest elevations. The municipality extends over a height of 220 to 633 m slm 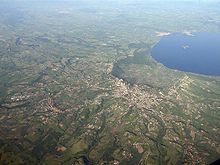 Montefiascone on the caldera

Montefiascone is located in a former volcanically active area, the so-called Apparato Vulsinio . The city itself lies on the caldera of one of the four main volcanoes. Lake Bolsena itself was created by the collapse of underground magma chambers. Numerous thermal springs in the area still remind of the volcanic past .

Montefiascone is on the strada stadale SS 2 Via Cassia , which leads from Rome via Siena to Florence . The closest motorway junction to the A1 Autostrada del Sole is 33 km from Orvieto . The city has a train station on the Attigliano-Viterbo railway in the Zepponami district.

Montefiascone was created as a retreat for the surrounding population during the migration period , probably in the 9th century to protect against the invasions of Arabs and Hungarians . A document from Pope Leo IV from 853 offers the first mention of Mons Flasconis . Located in the area of ​​the Patrimony of Petri , which Charlemagne had given to the Popes in 774, the settlement remained in their possession for most of the time, although there was no shortage of attempts, for example by the city of Orvieto , to acquire them permanently. Pope Innocent III (1198–1216) ordered the expansion of the settlement and its fortification in 1207. Martin IV. (1281–1285) stayed for some time in the castle which he had noticeably enlarged; According to Dante , Divine Comedy XXIV 330 f., he is said to have particularly enjoyed the eels of Lake Bolsena as a dish. One of the main representatives of the power of the Popes during their absence in Avignon was Cardinal Egidio Albornoz , who restored their rule in central Italy between 1353 and 1367 and had a headquarters in Montefiascone. On August 31, 1369, Pope Urban V (1362-1370) raised Montefiascone to the city, and his successor Gregory XI. (1371-1378) gave her a sizable piece of land in gratitude. In 1657 and 1695, epidemics and earthquakes impaired life, but the city remained in the Papal States until September 1870 , when it was incorporated into the Kingdom of Italy .

Montefiascone, In the old town

Montefiascone, ruins of the Papal Palace

Montefiascone was made a diocese in 1369, along with the former Corneto, who is now Tarquinia . On September 30, 1986 the diocese of Montefiascone was abolished, which in 1980 still had 34,178 Catholics in 20 parishes, which were looked after by 45 diocesan priests and 9 religious priests. The diocese area was incorporated into the diocese of Viterbo with three other dioceses (including the titular diocese of Aquipendium ), but Montefiascone has been included in the list of Roman Catholic titular dioceses since 1992 and used to equip papal curia officials. The former great importance of the diocese of Montefiascone and Corneto is evident from its role in the promotion of religious dignitaries. From 1369 until the separation from Corneto on June 14, 1854, a total of 15 cardinals officiated here as bishops; Special mention should be made of Domenico della Rovere (1478–1501), relative of Pope Sixtus IV , Alessandro Farnese (1501–1519), later Pope Paul III. , Guido Ascanio Sforza (1528–1548), Paluzzo Paluzzi Altieri degli Albertoni (1666–1670), cardinal depository of Pope Clement X , Marcantonio Barbarigo (1687–1706), Pompeo Aldrovandi (1734–1752), Giuseppe Garampi (1776–1792 ) and Jean-Siffrein Maury (1792–1816), from 1810 to 1814 also Archbishop of Paris and Primate of France under Napoleon I.

Andrea Danti ( PdL ) was elected mayor in June 2009. His center-right list made up the majority in the local council with 13 out of 20 seats. He replaced Fernando Fumagalli, who was no longer running. Until now, the city had been ruled by the center-left alliance. Luciano Cimarello (Lista Civica. La nuova Città) has been mayor since May 17, 2011, while Fernando Fumagalli is deputy mayor.

Montefiascone is known for its wine Est! Est !! Est !!! . The Fiera del Vino festival has been held every year in August since 1958 .