Fucecchio is an Italian municipality with 23,059 inhabitants (as of December 31, 2019) in the metropolitan city of Florence in the Tuscany region . 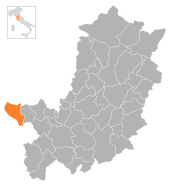 Location of Fucecchio in the metropolitan city of Florence

Fucecchio is about 40 km west of the provincial and regional capital Florence in the lower Arno valley , on the border with the provinces of Pisa , Lucca and Pistoia . With the exception of the district of San Pierino, Fucecchio is on the right-hand side of the Arno. In the north, the municipality borders on the Cerbaie range of hills (Riserva naturale Montefalcone) and the Padule di Fucecchio , which connects the Arno valley with the Valdinievole . The Padule di Fucecchio nature reserve, named after the municipality, of which most of it is in the area of Ponte Buggianese , is the largest internal marshland in Italy.

The name of the place, first attested in 1027, is probably derived from the Latin ficetulum (place with fig trees).

The Counts Cadolingi from Pistoia built a castle at this time, the Castello di Salamarzana (or Salamarthana), and the settlement of Borgonuovo on the Arno, at the point where the Via Francigena crossed the river. After the Cadolingi died out (1113), Fucecchio was at the center of the quarrels between Florence, Pisa and other noble houses. At the end of the 12th century the place became a free commune and remained under the rule of Lucca until it was annexed to Florence in 1330. At this time, a new fortification was built on the old castle, the remains of which can still be seen on a hill. Today's buildings in the town center date partly from the 16th to 17th centuries.

During the Second World War , the place, especially the castle, was badly damaged. The massacre at Padule di Fucecchio took place in the neighboring swamp area on August 23, 1944 , in which members of the German 26th Panzer Division killed 174 civilians.

Fucecchio's economy has traditionally been based on agriculture, trade and some handicrafts (textiles, straw hats, dye works, brick kilns). In the course of the 19th century, many tanneries and leather processing companies also settled here, the place belongs to the Tuscan leather industry center comprensorio del cuoio .

Municipalities in the metropolitan city of Florence in the Tuscany region