Conradin's certificate for Duke Ludwig II of Bavaria, issued on January 10, 1268 in Verona

The last Staufer Konradin set out from his winter quarters in Verona at the beginning of the year, accompanied by Friedrich von Baden and Mastino I della Scala and an army of 3,000 men in the battle for the Kingdom of Sicily towards southern Italy. Earlier, Duke Ludwig the Strict of Bavaria and Count Meinhard II of Gorizia and Tyrol refused to give the Staufer any further help and demanded the settlement of debts before their return, which is why Konradin as Duke of Swabia had a large part of his remaining legal and property claims to Duke Ludwig II of Bavaria had to pledge. Konradin crossed Lombardy and reached Pavia , where he received further reinforcements. In the Kingdom of Sicily there are now the first revolts against Charles of Anjou, supported by Pisa . At the same time, Pope Clement IV was expelled from Rome by the Ghibellines around Senator Henry of Castile . 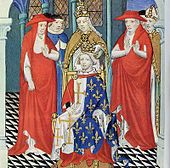 Charles I and Clement IV 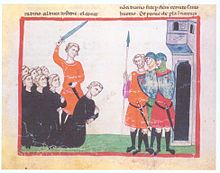 The public beheading of Conradin in the market square of Naples in 1268, miniature from the Chronica of Giovanni Villani , second half of the 13th century