Map of the Battle of Adrianople 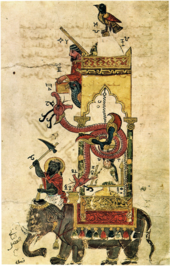 The Elefantenuhr of al-Jazari; Illustration around 1300, from a copy of his writings on machines