The title of this article is ambiguous. Further meanings are listed under Namur (disambiguation) .
lb le ls lh

Citadel, Walloon Parliament and the Meuse

Namur ( German also Namür , French Namur [ namyʁ ], Dutch name , Walloon Nameur ) is a city in Belgium with 110,779, almost exclusively French-speaking inhabitants. Namur is the capital of the Walloon Region and the province of the same name and also a Roman Catholic bishopric and university city ( University of Namur ).

Namur is located at the confluence of the Sambre into the Meuse , about 65 kilometers southeast of the Belgian capital Brussels .

The settlement established by the Celts in pre-Christian times was first mentioned in the 7th century. The Merovingians built their first fortress there. Namur became a county in the 10th century. The counts of Namur received only the north bank of the Meuse as a fief , the south bank was under the control of the Bishop of Liège ; accordingly, the city center developed only on one bank and the hamlet of Jambes on the other . 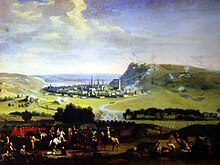 In 1262 Namur fell to the county of Flanders , and in 1421 Philip the Good of Burgundy acquired the city.

In the 17th century, the fortress of the city, which was now part of the Spanish Netherlands, was strengthened in view of the aggressive expansion policy of the French King Louis XIV ( War of Devolution 1667–1668). In 1692 France conquered and annexed the city. The citadel was expanded by Vauban , but William of Orange managed to recapture Namur for the Allies only three years later (1695) in the War of the Palatinate Succession . After the Peace of Rijswijk (1697), Namur received a Spanish and Dutch occupation at the same time, but at the instigation of Maximilian II Emanuel of Bavaria, it had to withdraw from Spain in 1701 after the death of Charles II . Thereupon French troops occupied Namur again. In 1704 the city was bombarded by the Allies in vain.

In 1709 the rule of the Dutch over the fortress was confirmed, but in the Peace of Utrecht (1713) the Habsburg rule over the now Austrian Netherlands was confirmed. So the paradoxical situation arose that the citadel was controlled by the Dutch, but the city by the Austrians. In 1715, Namur was added to the barrier places through the barrier treaty and was occupied by the Dutch. In 1746 the French, under Louis de Bourbon, comte de Clermont, took the city and the fort, but had to return both in 1748 in the Peace of Aachen . In 1784, Emperor Joseph II had the works of Namur (with the exception of the citadel) razed.

In 1794 Namur was captured by the French revolutionary troops and annexed like all of the Netherlands on the left bank of the Rhine. From 1795 to 1814, Namur was the administrative seat ( chef-lieu ) for the French department Sambre-et-Meuse . After the battle of Waterloo the city was occupied by the French on their retreat in June 1815 and ruthlessly stormed without aids, even without a gun, by the Prussian Second Army Corps on the orders of General Pirch ; but Namur could only be taken after the French had withdrawn. With the Congress of Vienna , the city became part of the United Kingdom of the Netherlands , after the Belgian Revolution in 1830, the Kingdom of Belgium.

Since 1866, the fortifications of Namur, with the exception of the citadel, were demolished, but the Belgian military built a ring of nine strong outer fortresses around the city from 1888-92 according to the plans of General Henri Alexis Brialmont , as there were around Liège . The city was considered impregnable until the explosive grenade was invented around 1890 : The grenades were then filled with picric acid or later TNP or TNT , which multiplied their explosive power. Brick fortresses could now be shot down; only very thick, particularly hard concrete could withstand the projectiles.

During the First World War , Namur was one of the main targets of the German Army . The forts were fired at with heavy artillery and destroyed, and Namur itself fell after only three days.

Namur also suffered severe damage during World War II . It was the German campaign in the west in 1940 , the Allied advance in autumn 1944, the German Ardennes offensive from December 16, 1944 and the counter-offensive by US troops on the front line.

After the Second World War, Belgium gradually transformed into a federal state with three regions. Namur became the seat of the authorities of the Walloon Region .

During a regional reform in 1977, numerous municipalities in the area were incorporated, including Marche-Les-Dames, which is 8 km upstream on the left bank of the Meuse. There died King Albert I on 17th February 1934 from a climbing fall.

Today around 110,000 people live in Namur. The population growth of 0.2 percent is below the Belgian average of 0.6 percent.

Namur is an important industrial center. Above all, metal processing companies and mechanical engineering are located here, but also companies in the porcelain and leather industry, as well as a brewery. On the outskirts of the village there is a quarry from which a blue natural stone has been cut for centuries . This was mainly used to decorate facades and is also known under the term Namurstein .

Motorways 4 and 15 run close to the city and intersect at the nearby Daussoulx junction.

The city is connected to the Thalys network (from Liège to Paris Gare du Nord ) and has connections to Brussels , Luxembourg , Lille and Dinant as well as the Athus-Meuse line . About 360 trains run daily through Namur Station.

The port of Namur (French Port Autonome de Namur ) is located in the middle of the densest navigable waterway network in the world, the large Rhine-Maas-Schelde-Moselle basin (20,000 kilometers).

Wépion-sur-Meuse, incorporated in 1977, has had a partnership with Biedenkopf since 1974 . Germany

Municipalities in the Belgian province of Namur