from Wikipedia, the free encyclopedia
This is the spotted version , flagged on September 20, 2019 . There is 1 pending change that has yet to be viewed.
lb le ls lh

Fosses-la-Ville is a city and a municipality in the province of Namur in the Walloon part of Belgium . In addition to Fosses-la-Ville, the municipality consists of the villages of Aisemont, Le Roux, Sart-Eustache, Sart-Saint-Laurent and Vitrival .

The Abbey Fosses ( Latin Abbatia Sancti Foillani ) was founded in 650 by Saint Foillan , an Irish monk , on a piece of land west of Namur founded in Belgium which he Nivelles Gertrude had given. He himself did not take up the post of abbot of the new abbey, but retired to Nivelles after he had completed his mission. Abbot became one of his Irish companions. 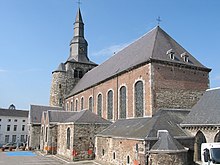 Foillan was murdered near Roeulx in 655 , after which he was made the patron saint of the abbey. After his death, his brother Ultan († 680) took over the management of the abbey.

Today's town of Fosses-la-Ville was built around the abbey.

Wikisource: Fosses-la-Ville in the appendix of the Topographia Westphaliae (Mathäus Merian)  - sources and full texts

Municipalities in the Belgian province of Namur