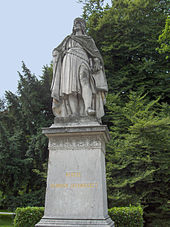 Mountains and pine trees in spring from Mi Fu