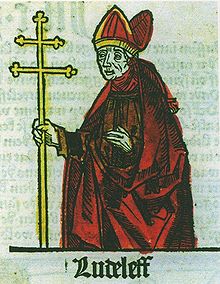 The origin of Ludolf is unknown. It is possible that he came from a farming family in Kroppenstedt. Ludolf was initially a collegiate student in Halberstadt and then studied, at times together with Thomas Becket , at the university in Paris .

Ludolf then became a cathedral scholar at the cathedral monastery of Magdeburg . On September 27, 1168 he was first mentioned as a canon . In 1179 Ludolf became provost of Sankt Wipert in Nienburg (Saale) . He held this office until 1187. On December 26, 1184 he was appointed cathedral dean in Magdeburg.

Ludolf repeatedly intervened in the disputes between Pope and Emperor in the Staufer-Welf throne dispute . So at the end of 1185 he belonged to the delegation of the German episcopate , which Pope Urban III. Presented complaints from Emperor Frederick I about the Curia .

In 1192 Ludolf succeeded Wichmann's Archbishop of Magdeburg. He continued the Hohenstaufen policy of his predecessor and supported Philip of Swabia in the election of the king in 1198 , whose interests he later emphatically represented. Ludolf thus became one of the leading representatives of the Staufer party in Saxony . However, he got into an opposition to the papal policy, which by Innocent III. has represented a friendly position towards the Guelphs since 1200/1201 . Ludolf was therefore banned several times.

In 1196, Margrave Otto II of Brandenburg and his brother Albrecht transferred their Ascanian property to Ludolf, which has since been regarded as a fiefdom given by the Archbishopric . In 1200 Ludolf founded the St. Peter and Paul Abbey in Sudenburg , a southern suburb of Magdeburg. Also in 1200 he, the Archbishop of Magdeburg, probably the first in the German Reich to donate a piece of land to the Teutonic Order: a hospital for poor and sick care in the western part of Halle ad Saale.

Archbishop Ludolf's bronze tombstone can still be seen on a southern pillar of the ambulatory in Magdeburg Cathedral to this day.