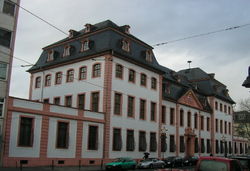 The Erthaler Hof in Mainz

The Erthaler Hof is an aristocratic court in Mainz . It was built as a family residence there by the Mainz bailiff in Lohr am Main , Philipp Christoph von und zu Erthal . He belonged to the penalty houses out line of the Franconian originating family of Erthal . As a gentleman architect and Kurmainzischer Hofrat, he was also responsible for the design. The execution was in the hands of Johann Michael Schmitt and Franz Anton Hermann . Construction began in 1734 and the building was completed in 1739. It belongs to the group of baroque aristocratic courts such as the Schönborner Hof , the Bassenheimer Hof and the Osteiner Hof around Schillerplatz .

Due to Erthals' study trips to France and his training by Germain Boffrand , the French court architect, von Erthal introduced the French-influenced classical style to Mainz with the Erthaler Hof he planned. From the middle of the 18th century at the latest, this replaced the Baroque style that had prevailed in Mainz until then.

The main building is rather simple and reserved, typical of the style of French classicism. It consists of two three-storey pavilions, which are connected by a lower central building, the so-called (and here slightly modified) three-sided scheme .

The center of the complex is marked by a triangular gable with the coats of arms of the Erthal and Bettendorff families under a baron's crown. This alliance coat of arms can be found on the more Austrian / Bohemian central projection on the courtyard side. Inside, stucco ceilings and wall cladding have been preserved, especially in the hall and stairwell. The decoration of the stucco ceiling allows a temporal classification in the transition phase from Bandelwerk to Rocaille . The fireproof ceilings saved the furnishings from destruction during the bombing in World War II .

After the end of the electoral state , the Erthaler Hof served the administration of the Départements du Mont-Tonnerre , Jeanbon Saint-André , as a prefecture. In the period from 1816 to 1945 it was used as the seat of the Rheinhessen provincial headquarters. Then the district government of Rheinhessen moved in and, from 1969, the administration of the newly founded district of Mainz-Bingen . Since 1998 the building has housed the General Directorate for Cultural Heritage Rhineland-Palatinate . Extensive restoration work and the restoration of the facades with their original color scheme are role models for a listed building.