Coat of arms of the Principality of Achaia

The Principality of Achaia was one of three larger vassal states of the Latin Empire . Like this, it was built after Constantinople was conquered in 1204 during the Fourth Crusade .

Achaia was founded in 1205 by Wilhelm von Champlitte , a participant in the knighthood crusade. He became a vassal of the Kingdom of Thessaloniki , as did Athens , until Thessaloniki was conquered by Theodore I , the despot of Epirus , in 1224. After that, Achaia became the ruling force in Greece .

Achaia was relatively small, it consisted of little more than the interior of the Peloponnese ( Morea ) and some ports like Monemvasia . It bordered Epirus and Venetian territory in the Aegean Sea and was so wealthy that it was able to aid the Latin Empire in its fight against Nicaea . 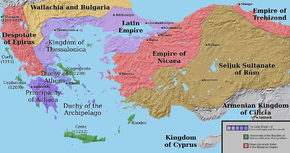 Map of the Byzantine Crusader States

The capital of the principality was Andravida , which Western Europeans counted among the best representatives of chivalry in the middle of the 13th century. Prince Wilhelm II of Villehardouin was a poet and troubadour , he had his own coin , literature and form of spoken French . The principality published the Chronicle of Morea , a valuable history of the Crusader States in Greece . Achaia's legislation, in which French and Byzantine aspects were found , became the basis of law in the other Crusader states. The nobility used Byzantine titles such as Logothetes and Protovestarios , which were merely adapted to the needs of European feudalism . The Byzantine Pronoia system was also adapted, small farmers ( Paroikoi ) owned their own land, but they had to do military service and pay taxes to which they were not subject in the original system. At its core, the early principality was a small French colony.

In 1249 Wilhelm II moved the capital from Achaia to Mistra near ancient Sparta . In 1255 he started a war for the Venetian territories in the Aegean Sea, in 1259 he allied himself with Michael II of Epirus against Michael VIII. Paleologus of Nicaea. When Michael of Epirus then switched sides, Wilhelm fell into the hands of his opponents in the Battle of Pelagonia . After they had recaptured Constantinople in 1261 , Wilhelm was released in 1262 against the surrender of Mistra and the rest of Laconia with the fortresses Maina and Monemvasia .

Wilhelm's successor was Charles of Anjou , King of Naples and Sicily . Charles and his descendants did not rule in Achaia themselves, but sent money and soldiers to defend the principality against the Byzantines. In 1311 the Duchy of Athens was taken over by the Catalan Company , whose activities also helped destabilize Achaia. The principality came under control of Italian nobles who held the shrinking land for another century until it was conquered by Thomas Palaiologos , the Byzantine despot of Morea, in 1432, only to be lost to the Ottoman Empire in 1460 .

Charles II of Naples gave Morea or Achaia as a fief to Isabella von Villehardouin, who was deposed again in 1307. The land was then given to Charles's son Philip I of Taranto , who passed it on to Matilde of Hainaut in 1313, who was married to Ludwig of Burgundy. Margarete, daughter of Wilhelm II von Villehardouin , on the other hand, had already made claims from the events of 1307, which she now took up again without success, and then passed them on to her daughter Isabella von Sabran , the wife of Ferran de Mallorca : the son of the two , Jaume III. , was proclaimed Prince of Morea in 1315 under the reign of his father, who shortly thereafter also conquered the principality, but was defeated by Louis of Burgundy and Matilda in 1316. Ludwig died in 1318, Charles II deposed Matilde and gave the fiefdom to his son Johann.

From 1331 the nobles began to exercise the rights of Jaumes, in 1333 the recognition was complete. Johann transferred the rights to his sister-in-law Katharina von Valois, the wife of Roberts of Taranto, who upheld her claims until his death in 1346, and bequeathed them to his son Philip II of Taranto . Jaume was followed in 1349 by his son of the same name (Jaume IV of Aragón, Jaume II of Morea), who is also called Jacob of Les Baux . Katharina died in 1364, Philip III. transferred his rights to Joan I of Naples , wife of Jaume II (Jacques des Baux), who in turn left the principality to his wife when he died in 1375. From 1383 to 1396 the principality was ruled by vicars .