The Duchy of Athens was one of the Crusader states in Greece established after the conquest of Constantinople during the Fourth Crusade . In its scope, the duchy largely corresponded to the present-day regions of Attica and Boeotia , later it extended as far as Thessaly .

The first lord of Thebes and Athens was Otto de la Roche , a Burgundian knight and participant in the Fourth Crusade. He received these cities from the end of 1204 as a fief of the Kingdom of Thessaloniki . But when this was conquered by Theodoros I Angelos , the despot of Epirus , in 1224 , the prince of Achaia raised a claim to supremacy over Athens. By an arbitration judgment of King Ludwig IX. France raised the rule of Thebes and Athens to a duchy in 1260. 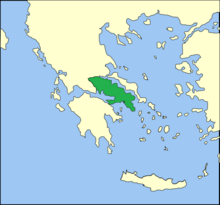 The duchy consisted of the Attica peninsula , stretched as far as Macedonia and had an undefined border with Thessaloniki and Epirus. The offshore islands of the Aegean Sea were Venetian territory. The buildings of the Acropolis in Athens ( Propylaea ) and the Kadmeia in Thebes served the dukes as palaces.

The de la Roche family held the title of duke until 1308, followed by Walter V von Brienne , who signed the Catalan Company , a mercenary force under Roger de Flor , to fight against the Byzantine successor states of Epirus and Nicaea . When Walter tried to break away from the company in 1311, the Catalans defeated him in the Battle of Kephissos and took control of Athens. They made Catalan the official language and replaced the laws adopted from France and Achaia with Catalan . The duchy became a secondary generation of the Aragonese royal house of Sicily. Walters' son only kept Argos and Nauplia under his control, where he continued to be dubbed Duke.

In 1318/1319 the Catalans conquered Siderokastron and the south of Thessaly and created the Duchy of Neopatria , which was united with Athens. Parts of Thessaly were lost to the Serbs in 1337 . After the death of King Friedrich III. of Sicily in 1377 Athens and Neopatria were ruled by his daughter Maria . In 1379 the Navarre Company captured Thebes and parts of Neopatrias in the service of the Latin pretender Jacques des Baux , while Peter IV of Aragón occupied the rest of Neopatrias and the Attica. In 1379 the duchy was directly subordinated to the Crown of Aragon and administered by vicars .

In 1385 the Florentine Nerio I. Acciaiuoli invaded Attica with a mercenary army. While the lower city could be occupied by Athens, the Acropolis initially remained in Catalan hands. After the occupation finally surrendered on May 2, 1388, Peter's son John I sold the duchy (initially without Neopatria, which did not follow until 1390) to Nerio. Under the Acciaiuoli family , Greeks were able to participate in the country's political life for the first time since the Fourth Crusade. An Orthodox diocese was also tolerated next to the Latin one.

Neopatria was occupied by the Ottomans in 1394 . The Venetians ruled the duchy from 1395 to 1402, and in 1444 it owed tribute to Constantine Palaeologus , the despot of Morea and heir to the Byzantine throne. In 1456, three years after the fall of Constantinople , the Ottoman Sultan Mehmed II conquered the duchy. Its last ruler, Francesco II Acciaiuoli , entrenched himself in the Acropolis , where he had to surrender in June 1458 after two years of siege.

Coats of arms of the Dukes from the House of Acciaiuoli