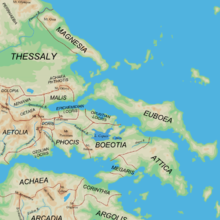 Map of the ancient Boiotien 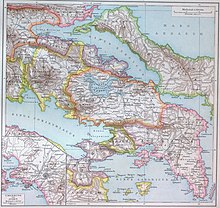 Boiotia ( ancient Greek Βοιωτία Boiotia , Latin Boeotia , so the Germans usually Viotia ) is in the ancient (by the local cattle pastures βοῦς būs ', beef) named landscape in southeastern Central Greece , where the Greek tribe of the Boeotians (Βοιωτοί) moved . Their size is about 2500 km².

Boiotien bordered Phocis to the west, the Corinthian Gulf to the south, the Kithairon to the east and the Opuntian Lokris to the north . The Euboean Sound formed the natural eastern border for a long time. The area is hilly in the north and mountainous in the south, with flat lowlands in between. The most important places in antiquity were Thebes and Haliartos , as well as Orchomenos , Thespiai (Thespiae) and Plataiai (Platää). Today's main places are Thebes (Thiva) and Livadia . Boiotia remained an inland agricultural land, although its coastlines contained natural harbors. Akraiphia , Aulis , Eutresis , Gla , Leuktra , Siphai , Tanagra and Thisbe are also of historical and archaeological importance .

The oldest traces of settlement can be found in Boiotien as early as the Paleolithic in caves around the Kopaïs lake . At least since the Neolithic Age there was a high population density in the fertile inland plains. At least 56 sites are known to date from the Early Bronze Age ( Early Helladic ), but few of them have been systematically researched archaeologically. Most of the settlements were near the coast or on traffic routes to larger ports. Architectural remnants from the Early Helladic Era have been excavated in Thebes , Orchomenos , Eutresis and Lithares , among others . In Mycenaean times Thebes and Orchomenos were the seats of important dynasties, whose rival relationships apparently found expression in later mythical tradition. The Kopais Lake was drained and so new, extensive agricultural areas were opened up, which, however , were again under water after the decline of the Mycenaean palace culture (approx. 1200 BC). The fortress Gla , located on an island of the (drained) lake, was abandoned shortly before the end of the palace period.

Early tribal and cultic relationships existed with Thessaly , which is indicated by the close relationship between the Boiotian and the Thessalian dialect . The ancient Boioter tribe probably moved from the north-west to Boiotien as part of the migration of the Dark Centuries , settled here and gave the area its name. The ancient tradition reports accordingly that the Boiotians - allegedly 60 years after the Trojan War - immigrated from Thessaly to Boiotia. The name form of the people (Βοιωτοί) is northwest Greek and possibly comes from the name of the Macedonian border mountains to Epirus , Boion . Initially, the Boiotic communities were only loosely connected. Homer already lists 29 of their cities in his ship catalog. Common places of worship existed in Onchestus and near Koroneia . In the latter place, the general festival of Pamboiotia was celebrated with games at the temple of Athene Itonia .

In the late 6th century BC Chr. The foundation was a first federal boiotischer cities set the tone in the Thebes. However, there were internal disputes, mainly because of Thebes' striving for unlimited hegemony, which is why Plataiai , located near the border with Attica , did not join the league, but allied itself with Athens . On the occasion of the early 5th century BC The Persian wars undertaken by Darius I and Xerxes I to subjugate Greece supported numerous members of the Persian League; only Plataiai and Thespiai sided with Athens. Therefore, after the successful defense against the Persian invasion attempts (480 BC), the union may have been dissolved. In any case, Theben lost his leadership role. After the Athenians in 457 BC BC had defeated a Boiotic army in the battle of Oinophyta , they destroyed Tanagra and briefly gained supremacy over Boiotien. However, the Attic strategist Tolmides had to surrender in the battle of Koroneia (447 BC) and Athens thus renounced hegemony over the landscape. Boiotien was now more tightly organized as a federal state, its cities were grouped into eleven equally large districts and were proportionally represented in the executive offices ( Boiotarch ) and federal organs.

The Boioter support Sparta in the Peloponnesian War (431–404 BC), but then fell out with the Spartans. As a result, they went together with Athens, Corinth and Argos in the Corinthian War (395–387 BC) without result against Sparta to the field. This military conflict was ended by the King's Peace in 387/386 BC. Ended, which meant the dissolution of the Boiotischen covenant. Pelopidas conquered in 379 BC. The Kadmeia returned from the Spartans, liberated Thebes and was then a close collaborator of his friend Epaminondas . These two leading politicians and generals further expanded Theben's hegemony in the newly established Boiotischen Bund; Plataiai and Orchomenos were destroyed. Epaminondas referred to Boiotien as the “ Ares dance floor ” because its extensive plains were ideal for the type of warfare associated with the Greek phalanx . 371 BC He defeated the Spartans decisively in the battle of Leuktra and thus gave Thebes the leading role in all of Greece for a short time. The Boiotic League was at the height of its power. 362 BC However, Epaminondas fell in the Battle of Mantineia , which again marked the end of Theban hegemony over Greece. King Philip II of Macedon won 338 BC. The battle of Chaironeia against the allied Athenians and Thebans and thus gained supremacy in Greece, thus also the hegemony over Boiotia, whose covenant was restored. 335 BC Philip's son and successor, Alexander the Great , won a battle over Thebes, which had risen against the Macedonian rule. He had the city laid in ruins, while Plataiai and Orchemenos were rebuilt. Kassander promoted 316 BC The reconstruction of Thebes.

In the armed conflicts of the Hellenistic period , the Boiotische Bund was able to hold its own. For some time even Chalkis , Eretria , Megara and other cities belonged to Boiotia. When King Perseus fought the Third Macedonian War (171–168 BC) against Rome , the Boiotians were his allies, but there were also Rome- friendly parties in individual Boiotic cities. The Romans intervened militarily in Boiotia and destroyed, among other things, 171 BC. BC Haliartus . Boiotien also took part in the uprising of the Achaean League against Rome. Was dissolved. The federal government was quickly re-established. It lasted until the late imperial era , but it no longer had any political significance, it only had ritual functions. Many cities in the landscape fell into disrepair under Roman rule. Strabo only knows Tanagra and Thespiai as mediocre cities; all the rest were in ruins or had degenerated into small places. The very modest prosperity of Boiotia was later destroyed again by an invasion of the Goths under Alaric .

In 551 AD Boiotia was badly hit by a violent earthquake ; eight communities were devastated. In the 7th century, Slavs settled in Boiotia. Thebes, which was the metropolis of the Hellas theme, flourished in the following two centuries . In the 13th and 14th centuries, Boiotia was a heartland of the Duchy of Athens . Towards the end of the Middle Ages , Albanians immigrated to the deserted landscape.

The most important sanctuaries of Boiotia were the sanctuary of Poseidon in Onchestus , the Athena Itonia near Koroneia and the temple of Apollo in Delion .

In ancient Greece (especially among the Athenians) “Boiotisch” meant “rural, coarse, uneducated”; the Greeks sometimes even called the Boiotians "Boiotian pigs". With this word meaning, “Boeotisch” entered the upscale German language of the 18th and 19th centuries, for example with Lion Feuchtwanger , who lets the figure Paul Hessreiter speak of the “Boeotization” of Munich in his novel Success . In the French language , béotien has the meaning of "cultural bane, primitive , uneducated person" to this day.